Mats at the Mall

Howland falls to Canfield in match at Eastwood Mall 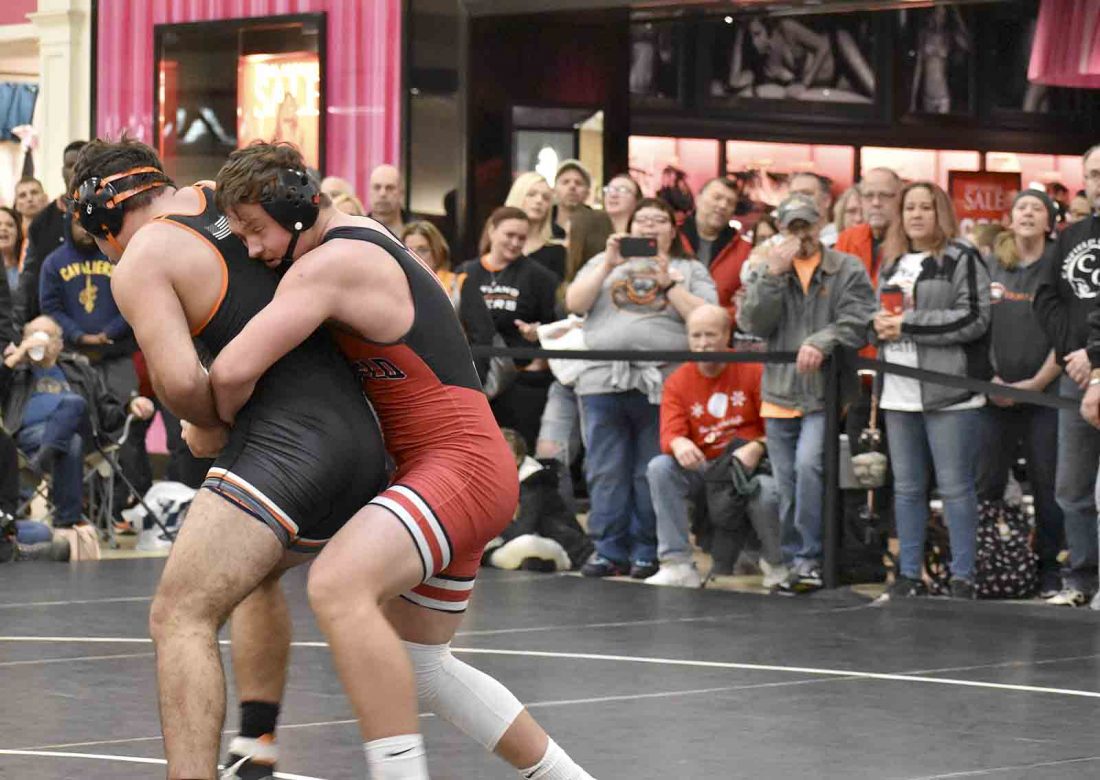 Staff photo / Brad Emerine Howland’s Nick Mijavek (black uniform) and Canfield’s Kip Stewart (red uniform) wrestle at 220 pounds as a crowd gathers on Saturday in the center concourse at the Eastwood Mall in Niles. Mijavek won, 3-0, but the Cardinals won the dual match 56-13.

NILES — The Mats at the Mall event has a different feel than most regular-season high school wrestling matches — for good reason.

The combatants — Howland and Canfield — competed at Eastwood Mall on Saturday in an attempt to draw more publicity and grow excitement for the sport. They work on their form and battle hard against an opponent, rather than a wrestling partner in the wrestling room at their respective high schools.

“Our goals as separate programs when we entered this unique venue was to get more people to experience the sport, who wouldn’t normally go to a high school gym to watch,” Canfield coach Stephen Pitts said. “We’re targeting the people who wouldn’t normally see a match or may not know anything about the sport.

“At the same time, the kids really enjoy this perspective. The atmosphere is great, the crowd noise is fun and it draws added publicity and support. On Wednesday, we’ll be hosting Boardman in a match that will be shown on (local television). Plus, we have some other ideas up our sleeves as well.”

The Mats at the Mall was won by Canfield, 56-13. But that came as no surprise to anyone as the Cardinals have won all three events against Howland and have proven to be one of the top teams in the state in recent years. 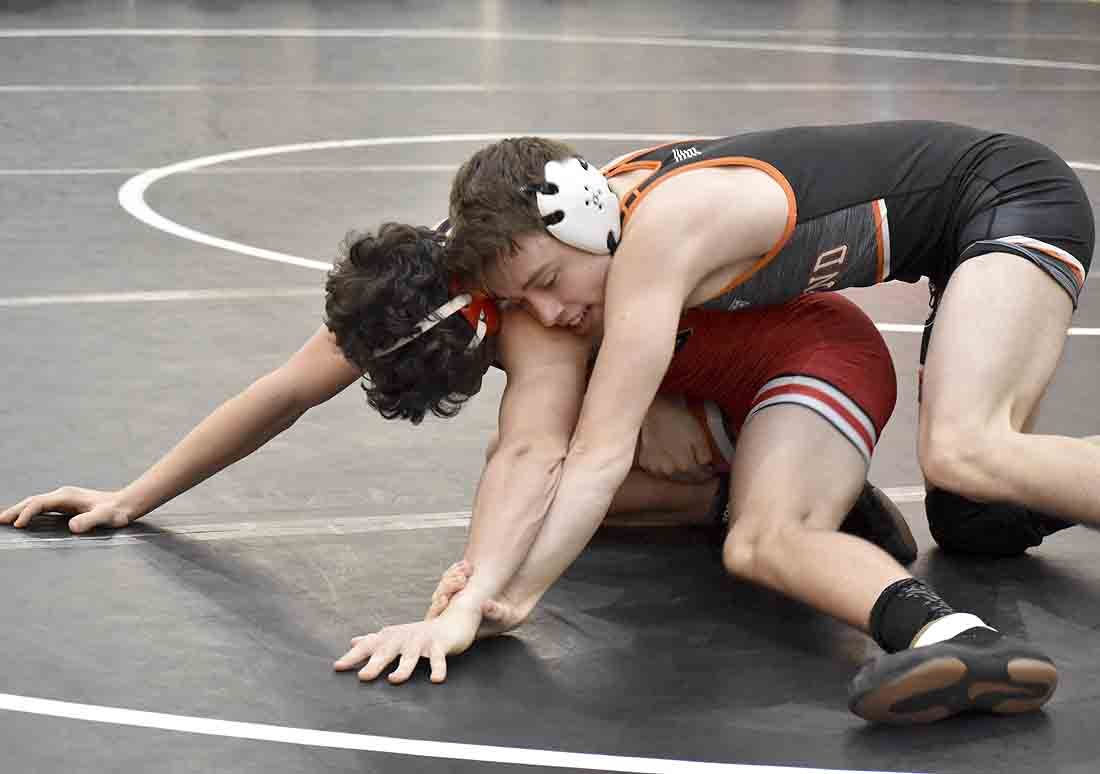 “Canfield has won them all and that’s not unexpected,” Howland coach Matt Zakrajsek said. “They’re a strong program that has been especially strong recently. Us on the other hand, we’re a young team and we’re an injured team right now. But I was very pleased with our effort. We’re getting better. We’re attempting more takedowns and gaining more scoring opportunities now than we did earlier in the season.”

According to both Pitts and Zakrajsek, the crowd size appeared to have gown just slightly over past years. Pitts said the Eastwood Mall affiliates presented some new ideas this year.

“The Eastwood Mall does such a great job accommodating everyone,” he said. “They would like to involve other teams, rather than just Howland and us. Whether that’s making it a (double-dual or tri-match) or rotating schools every year or every other year … There has been talk about that.

“We’re thinking of something a little different on our own. We’d like to see a girls basketball game and wrestling match back-to-back here and maybe call it something like Beauty and the Beast. That would be fun.”

Zakrajsek said the raves have far exceeded any complaints, but there has been one issue everyone keeps pointing out. 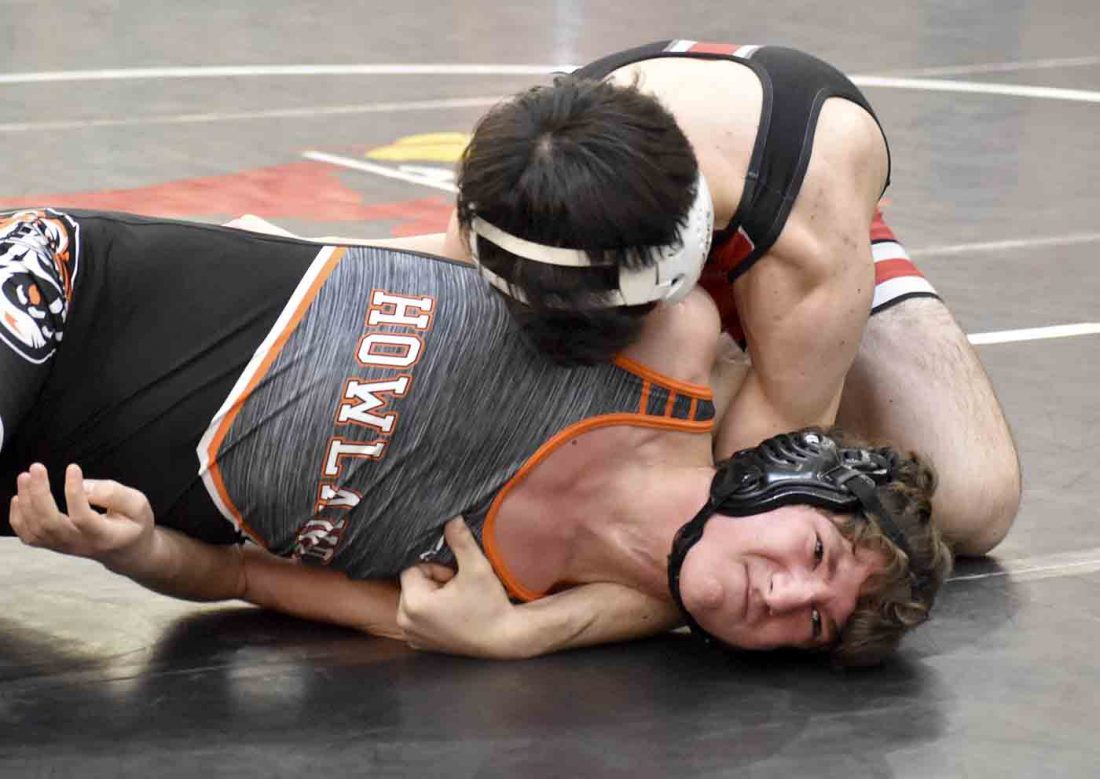 “We love everything about this, but seating has been an issue for some of the older folks,” he said. “When everyone stands and you’re three or four people deep around the ring, it’s tough for everyone to see. If you sit, you really can’t see much. Aside from bringing in bleachers, what can be done? Every year it has become more fan friendly, but that’s a tough obstacle.”

“This was awesome today,” Smith said. “I love this. I don’t think it’ll ever get old, at least as far as I’m concerned. It gives us a chance to show off our skills to new people. It’s becoming a great tradition.

For Howland, Ethan Snyder earned a pin at 145, Rian Spangler defeated Ian Hull 17-3 for a major decision, and Nick Mijavec beat Kip Stewart 3-0 at 220. There was a double-forfeit at 152.

“I was pleased with everyone, but it was nice to see Rian, Ethan and Nick wrestle well and I thought our heavyweight, Georgio, also wrestled well against a great opponent,” Zakrajsek said.