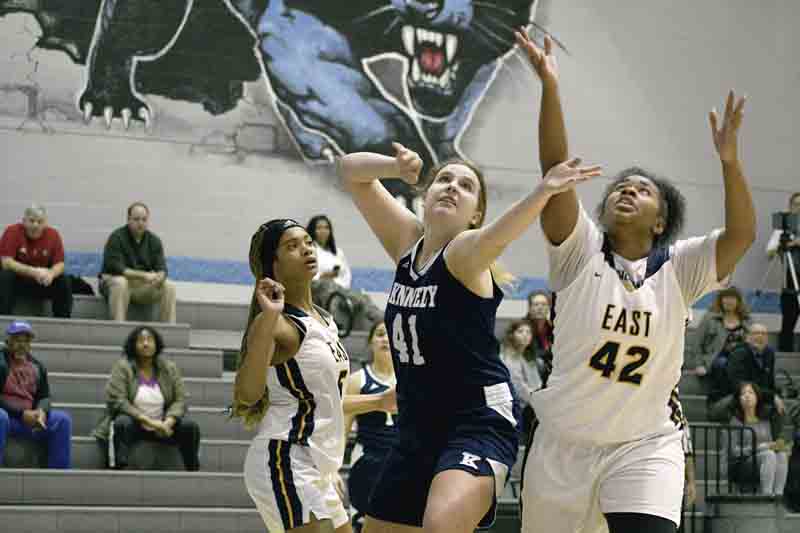 Staff photo / Brian Yauger Caitlyn Condoleon dribbles the ball down the court during the second half of Kennedy’s loss to Youngstown East. Condoleon would finish with nine points.

YOUNGSTOWN — After a rough stretch with losses against Hubbard and Liberty, Youngstown East is now on a four-game wining streak after taking down John F. Kennedy, 44-24.

“I thought we played a well-rounded game,” Golden Bears coach Tanisha Franklin said. “I thought we controlled the boards, which was a huge contribution to the game. … Our freshman guard Samair Colon stepped up big time for us.”

Colon scored 13 points for East. Delena Brown led the team with a game-high 14 points. Both of them brought down four rebounds.

One key for East was strong defensive play and being able to shut down Kennedy’s biggest weapons. The Eagles’ leading scorer, Caitlyn Condoleon, was held to nine points as was Faith Hollobaugh.

“We keyed in on number 13 (Condoleon) and number four (Hollobaugh),” Franklin said. “We knew that we would have to shut them out in order to have a chance to win. I feel like our girls played really good defense. We knew where they were at all times, contesting each and every shot.” 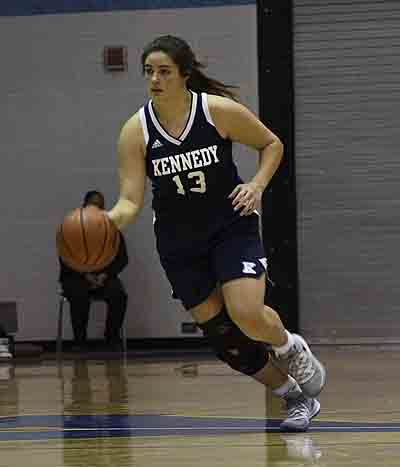 Staff photo / Brian Yauger Caitlyn Condoleon dribbles the ball down the court during the second half of Kennedy’s loss to Youngstown East. Condoleon would finish with nine points.

That defensive play opened up the offense, according to Franklin, who saw her team outrebound JFK 36-28. Brianna Thompson and Donovan Gillison led the team with nine rebounds each.

“I think our defense allowed us to leak out to get some early buckets that eventually opened up the game for us,” Franklin said.

Kennedy coach John Condoleon was pleased with his team’s defensive performance, but none of that matters when the offense is unable to score.

“I thought defensively we did what we had to do,” Condoleon said. “We had them in the low 40s, they got in foul trouble, but we just couldn’t make shots. I think we took 50 shots and ended up with 22 points. You can’t win many games like that.”

Nine of those 24 points the Eagles scored came in the first quarter. After the first quarter, they trailed by six, but the shots stopped falling once the second quarter hit. In the second half, Kennedy was held to eight points, scoring only one point in the third quarter.

When January rolls around, coaches begin to think about the tournament Franklin said. She is grateful to be playing tougher teams around this time of year as a glance of what they’ll be seeing come March.

“We like to schedule teams like a Warren JFK, who’s obviously well-coached, toward the end of the season to prepare us for that playoff push,” she said.

Kennedy drops to 9-4 and hosts St. Thomas Aquinas on Wednesday. As for tournament preparation, the Eagles are following the same approach as East.

The Golden Bears (9-4) look to continue their win streak against a young Brookfield team.

“They’re a good well-disciplined team,” Franklin said. “I’m going to watch the film on them and get ready for them on Wednesday, and hopefully we’ll be able to walk out with a win.”