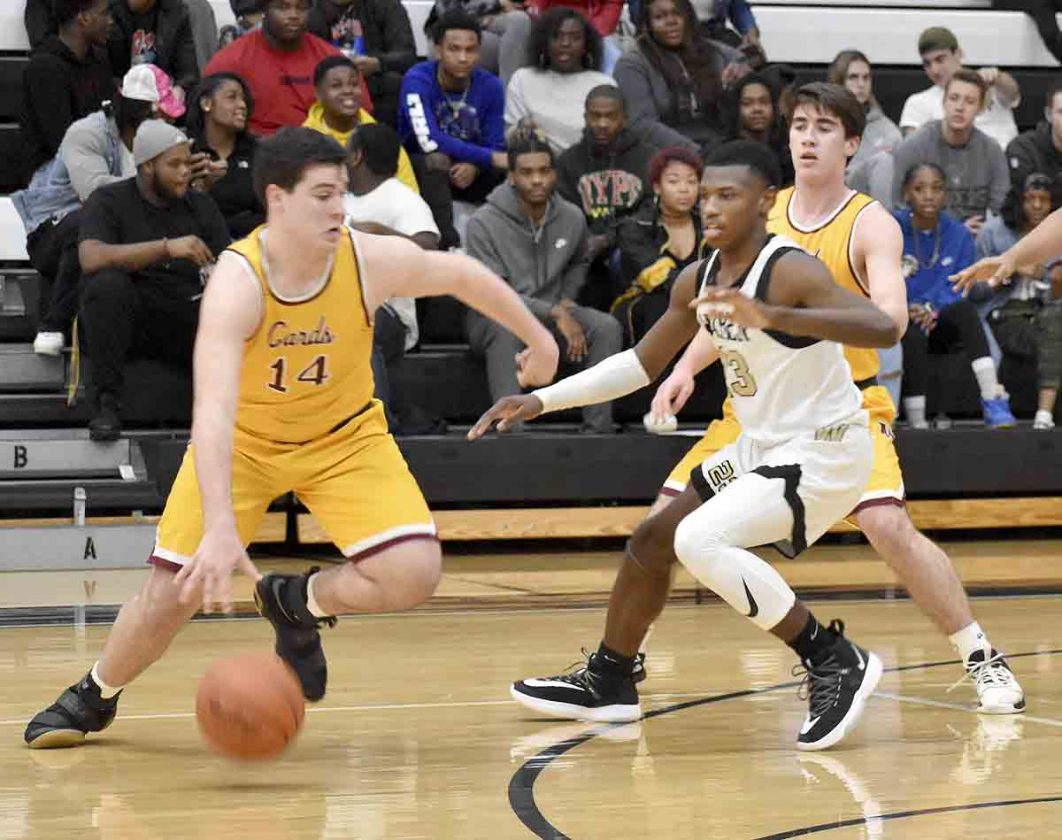 Staff photo / Brad Emerine — D’Muntize Owens, left, of Warren G. Harding gets the ball as he comes around a pick set by teammate Aston Bates (24) Friday night in the Raiders’ 50-43 win over Cardinal Mooney.

Staff photo / Brad Emerine — D’Muntize Owens, left, of Warren G. Harding gets the ball as he comes around a pick set by teammate Aston Bates (24) Friday night in the Raiders’ 50-43 win over Cardinal Mooney.

Staff photo / Brad Emerine —D’Muntize Owens, left, of Warren G. Harding gets the ball as he comes around a pick set by teammate Aston Bates (24) Friday night in the Raiders’ 50-43 win over Cardinal Mooney.

But the Raiders forced a few turnovers and missed field-goal attempts from the Cardinals, then did what they do best — get up and down the floor.

“We finally forced some misses, got some rebounds and got the ball up the court, and that’s the way we need to play,” Harding coach Keelyn Franklin said. “I was happy to see us push the pace and stay motivated even when things weren’t going our way.”

After Mike Pelini closed the third quarter with a bucket to give Mooney a 33-30 lead, the Cardinals got a driving bucket from Sonny Rodriguez and Pelini’s 3-pointer from the top of the key to post their biggest lead of the contest at 38-30 just one minute into the fourth period. 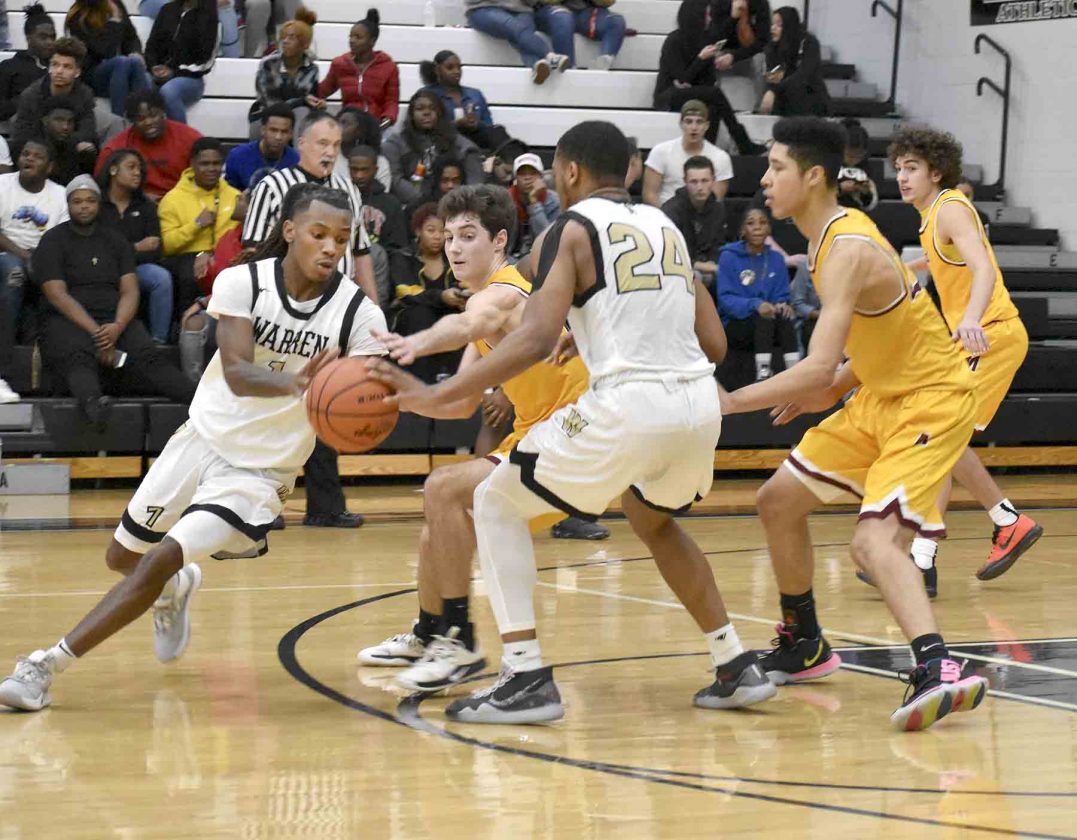 Staff photo / Brad Emerine —D’Muntize Owens, left, of Warren G. Harding gets the ball as he comes around a pick set by teammate Aston Bates (24) Friday night in the Raiders’ 50-43 win over Cardinal Mooney.

That’s when Johnny Graham triggered the 12-0 run with a 3-pointer from the right corner. D’Muntize Owens then split a pair of free throws and Aston Bates scored the putback. Dom Foster then made a steal and converted a layup.

After Mooney missed a rushed shot, Foster made a strong baseline drive for another basket and Bates had another putback moments later as Harding led 42-38 with 4:13 left.

“For the better part of the night, we played at our tempo,” Mooney coach Carey Palermo said. “But that three-minute stretch just killed us. We had a turnover took a quick shot and allowed an offensive rebound off a missed free throw, which is truly inexcusable. We did that twice in the fourth quarter and it just isn’t acceptable.”

Franklin was just glad to see something work.

“We were struggling to score against their zone and it’s hard to beat them down the floor if you’re taking the ball out of bounds,” he said. “So when we got some stops, we were able to attack them and beat them down the floor. We got that intensity cranked up from there, and even when we weren’t able to get quick looks or scores, we moved the ball more quickly and were just crisper.”

After Mooney used an old-fashioned three-point play from Tommy Fire to trim its deficit to 42-41, the hosts scored the next five points on a free throw, Bates’ second putback of a missed free throw and a layup by Graham that came off the fifth assist of the game from Owens.

However, free throws have been a source of concern for the Raiders all season and they were just 8-for-19 from the charity stripe Friday night.

“We work and work, but free throws are such a mental thing,” Franklin said. “As soon as we have that one breakout game where everyone’s making them, it’ll get out of their heads and they’ll be just fine. But we’re waiting for that game to come.”

Owens finished with a team-high 16 points and made two 3-pointers, but was 4-10 from the line. Bates scored seven of his 15 points in the final quarter. Foster added eight points, half coming on strong dunks before intermission. Graham contributed eight points off the bench, including a pair of 3-pointers.

Pelini kept Mooney close throughout, scoring a game-high 18 points. He reached that total without attempting a free throw and he connected on a pair of 3-pointers. Fire added 12 points for Mooney, which trailed 10-8 after the first quarter and 21-20 at halftime before taking a 33-30 lead entering the final salvo.

“We’ve lost a two or three games where we were right there in the closing minutes,” Palermo said. “We haven’t learned how to win the close ones yet, but playing this scheduled will certainly prepare us for the future. We’ve been right there. We just have to finish.”