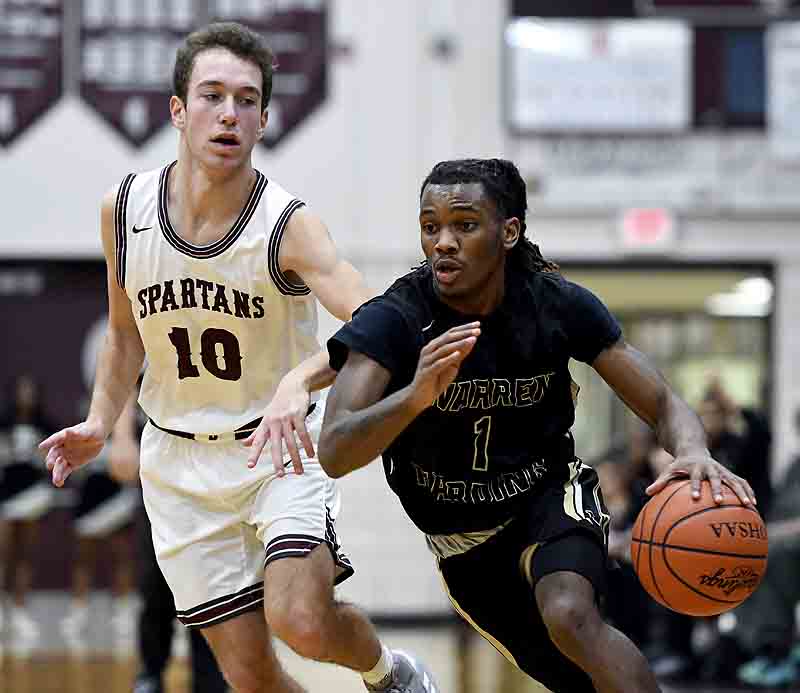 Correspondent photo / Robert Hayes — D’Muntize Owens (right) drives inside on Zach Ryan (left) of Boardman during the second quarter. Owens had a team-high 14 points for Harding.

Correspondent photo / Robert Hayes — D’Muntize Owens (right) drives inside on Zach Ryan (left) of Boardman during the second quarter. Owens had a team-high 14 points for Harding.

BOARDMAN — A lot of coaches say adversity can help build a team’s character.

Last Sunday, the undefeated Boardman Spartans got a taste of adversity when Green High School walked away with a five-point victory over the Spartans for their first loss of the season.

Boardman didn’t have much time to dwell on the loss, as they faced a formidable Warren G. Harding team at home only two days later.

After a back-and-forth start, the Spartans used an explosive second quarter to rout the Raiders, 61-42, at Boardman High School. With the win, Boardman sits atop of the All-American Conference’s Red Tier at 4-0 in league play.

Spartans coach Pat Birch was proud of how his team handled themselves following their first loss on Sunday. 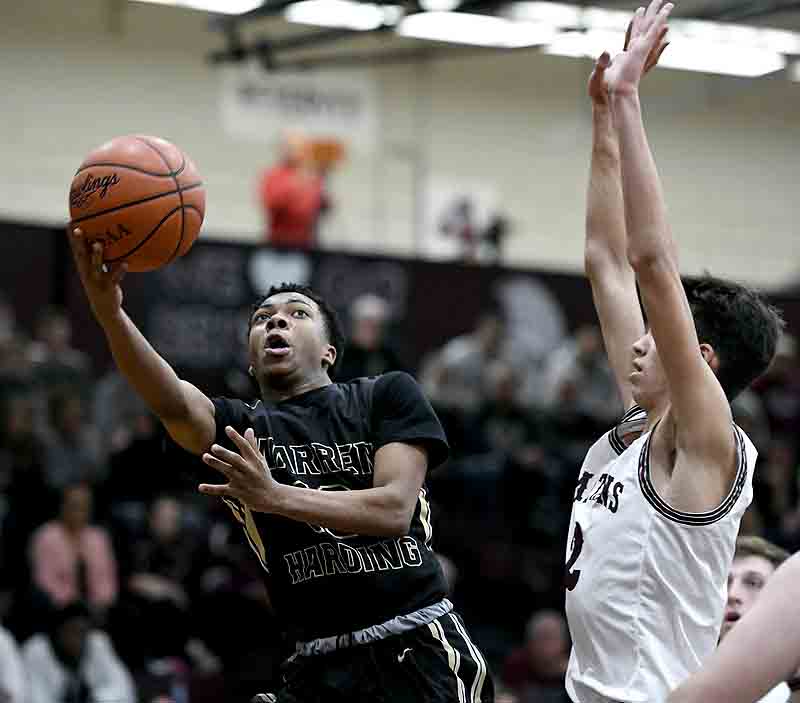 “The feeling afterwards is that we learned a lot about ourselves,” he said. “I told the guys, I thought what we really learned was how we responded today. We had a lot of excuses that we could have made today: three games in five days, tough loss, emotional physical game on Sunday, and to respond the way we responded, to come out a little sluggish, but find our rhythm in the second quarter, I think it speaks volumes about these guys and our leadership.”

Boardman (11-1) was down 13-8 in the first quarter before going on a game-changing 23-3 run to give themselves a big cushion throughout the rest of the game. Overall, they outscored Harding 18-5 in the second quarter.

Derrick Anderson was once again the main catalyst for Boardman’s offense, as he scored a game-high 25 points. Anderson also made 11 out of his 13 free throw attempts.

“They were playing very physical and we had to match that at the beginning of the game,” Anderson said. “So we brought physicality and just kept defending well and just kept taking care of the ball.”

“I think defensively we did some things tonight to contain them,” he said. “Derrick, give him credit, we didn’t have our best offensive game and I think he took it upon himself to make sure that we were going to steady the ship a little bit and then give our other guys a chance to get their legs underneath them.”

Charlie Davis had a pair of back-to-back three-pointers late in the third quarter when Harding was beginning to make some shots.

“I’ve been dealing with a foot injury a little bit, so my minutes have been a little down,” Davis said. “But I knew when I came in that my job is basically to take charges, play some defense and hit a few 3s every now and then.”

Additionally, Tommy Fryda and Daeone Martin each chipped in with eight points for Boardman.

Meanwhile, Harding has lost several games this season, but many of those losses have been to quality teams like St. Edward, Chaney, and Boardman. Raiders coach Keelyn Franklin feels that his team’s schedule could help them prepare for the postseason.

“I think the best teacher is experience and when we looked at our schedule this year and had the Cleveland teams we had to play on top of Boardman being in our conference who was aa really good team last year and is a top team in the state this year,” Franklin said. “So, we understand that we were going to take our lumps and we understand that were going to be in some difficult games, but moving forward, we hope that it kinda prepares us for a tournament run and kind of putting us in a situation were we have to some adversity. I think this is our biggest loss of the year, so we’ve kind of had games from all varieties. Blowout wins, blowout losses, close wins, close losses, so I think that will help us.”

D’Muntize Owens led Harding with 14 points and Tyriq Ivory followed him with six.