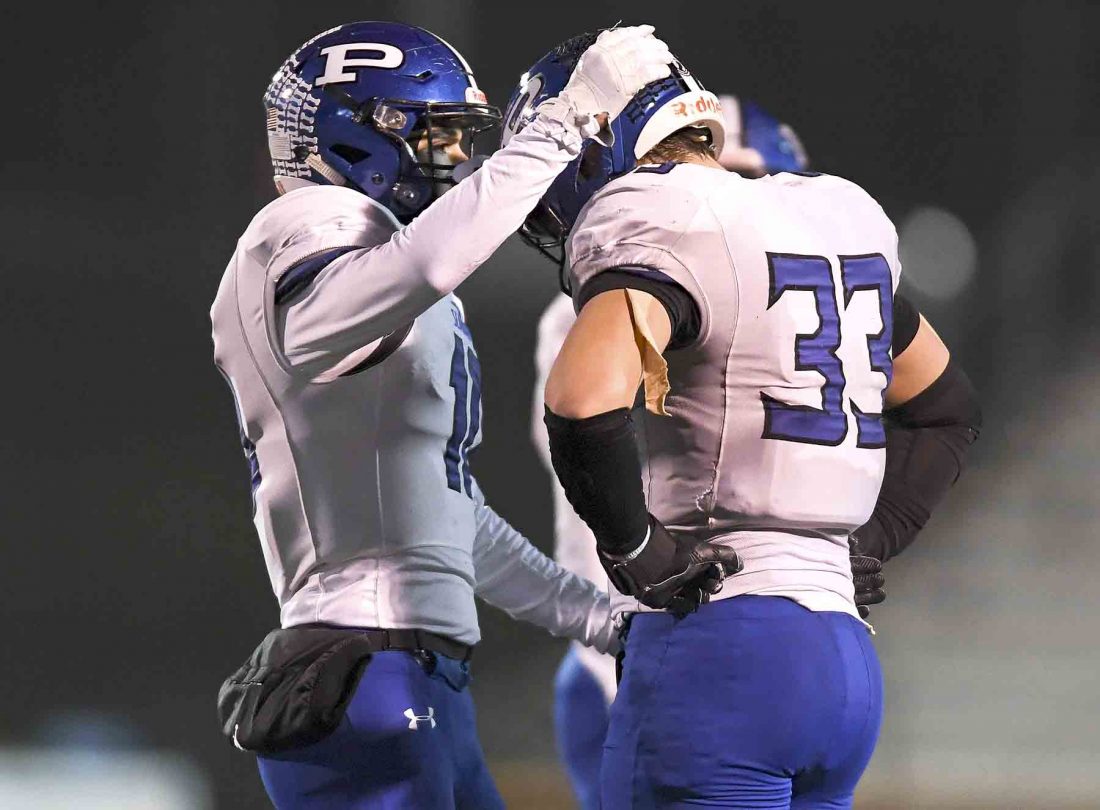 MASSILLON — Coach Ryan Williams looked around at his team, seeing the crying, forlorn faces around the field turf at Paul Brown Tiger Stadium.

He couldn’t, nor could the rest of the Poland Bulldogs, believe what just transpired Saturday against Licking Valley in a Division IV State Semifinal. All the players and coaching staff could do was stare at gigantic scoreboard at the south end of the stadium.

Licking Valley rallied from a 14-point, fourth-quarter deficit to shock the Bulldogs and now faces Clyde, which beat defending D-IV state champion Cincinnati Wyoming in the other state semifinal, in next week’s state title game in Canton.

“That was a tough one to swallow, real tough,” Poland’s Michael Voitus said.

Poland’s Jack Fulton faked a handoff to Joshua Alessi, who had 186 yards and 35 carries, and went to the west end of the stadium, eventually beating a Licking Valley defender to the pylon for a touchdown with 8:04 remaining.

“I just put my head down, ran hard,” Alessi said. “I knew it was going to be a battle. I tried my best to run through people and get as many yards as I could.”

He did this with a separated shoulder, which he suffered last week in a regional final game against Perry.

“It hurt, but I looked at my team,” Alessi said. “They were all working hard and wanted to win. I had to pick my place up and work hard for them.”

It was far from over, however. Licking Valley (14-0), boasting a high-powered spread offense, quickly came back. With 6:24 left, Logan Bragg connected with Bodee Creech on a 15-yard pass over the middle as Voitus almost sacked Bragg. Poland led 24-17.

The Bulldogs couldn’t get much going on its next drive as it stalled near midfield. Poland was in punt formation, but the snap went out of the reach of the Bulldogs’ Brendan Gurd. He tried to regroup and kick, but he was bumped by a couple of Licking Valley players. Licking Valley took possession near the 20 with about 4 minutes left.

Bragg, who was 14-of-27 for 136 yards, threw his second TD pass to Creech — a 10-strike with 3:40 remaining to pull within 24-23. Licking Valley called time out as it was going for two. It lined up two wide on both ends, and Bragg threaded a pass through the Poland defense to Mitchell Ford.

Licking Valley took its first lead since a 3-0 advantage late in the first quarter. Poland got away from its running game with only one timeout remaining as Fulton was throwing. He was 2-of-8 for 57 yards.

“You got to cover a lot of ground in a short period of time,” Williams said. “You got to go to the air. We caught one early. We like to throw it when we want to throw it, not when we’re supposed to.

“We had a couple of looks at it, couple balls at it. I was proud of our effort.”

The last pass was an interception by Licking Valley deep in its own territory with 5 seconds remaining.

In the first half, Fulton was reserved for running and maybe a short pass in the flat or two. The Bulldogs changed things up with 35 seconds left in the first half as Fulton aired it out to a jetting Andrew Centofanti in stride for a 49-yard touchdown. Poland took a 10-3 into the break, highlighted by some key defensive plays that accounted for a low-scoring first half.

Alessi accounted for most of the Bulldogs rushing attack with 20 carries for 106 yards, following a stout offensive line. But it was the other side of the ball where Poland excelled, accounting for the Bulldogs surge into the state semifinals.

Creech caught a 72-yard pass from Bragg in the first half, however, the play was called back because Creech and the Poland defender each were called for face mask penalties. Poland’s Dean Gessler made a play on a Licking Valley defender with about 30 seconds before halftime at the goal line, preventing a TD pass.

Licking Valley had to settle for a 26-yard Alex Pennington field goal with 12 seconds left in the first quarter for a 3-0 lead.

This is a Poland team that started the season 1-2. Voitus and the rest of the seniors gathered and realized this isn’t how the 2019 season would unfold.

“We knew that’s not how we wanted to go down as a team,” he said. “Brought our stuff together, got to work and practiced as hard as we could every single week.

“It got us this far. Wish it got us further.”