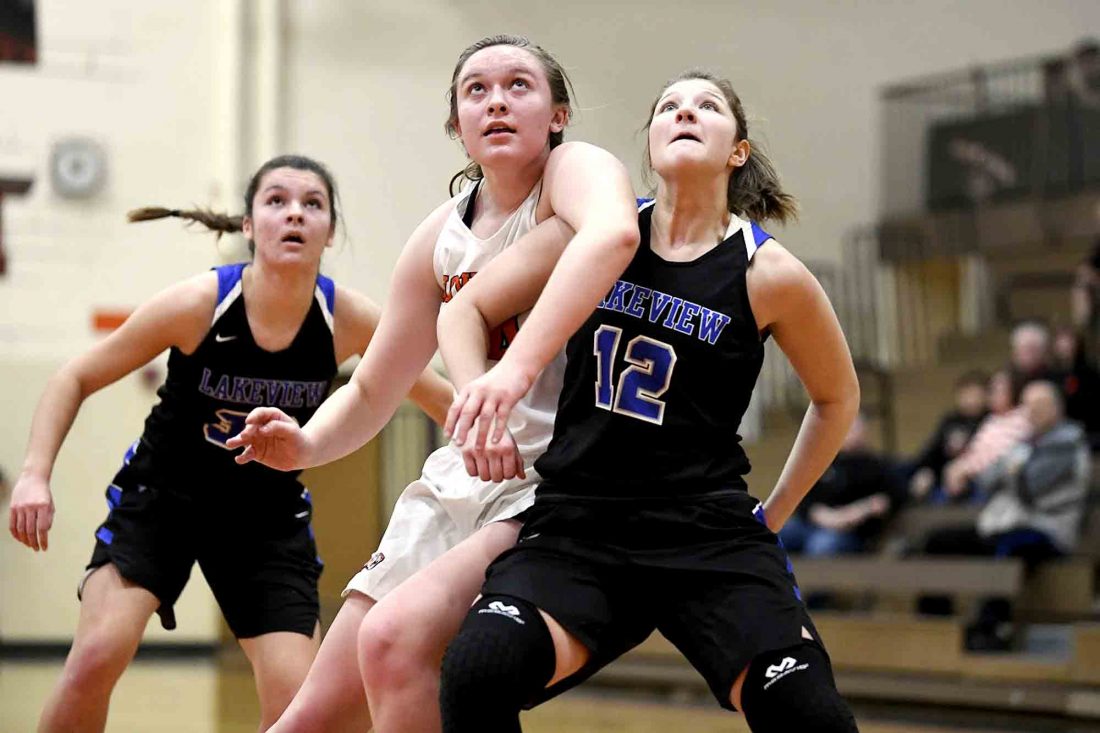 Correspondent photo / Robert Hayes Maria Dellimuti of Howland looks to pass the ball to one of her teammates during the first half at Howland High School.

Correspondent photo / Robert Hayes Howland’s Alyssa Pompelia, left, prepares to drive toward the paint against Lakeview’s Melanie Wolf, right. Pompelia had a team-high 16 points in the Tigers’ 56-24 victory over the Bulldogs.

Correspondent photo / Robert Hayes Lakeview’s Meg Zetterquist takes the ball up-court during the second half. She had a team-high eight points for the Bulldogs.

Staff photo / Brian Yauger Aiden Gallacher makes a move to rush toward the puck for the Youngstown Phantoms during Friday’s game at the Covelli Centre.

HOWLAND — After finishing last season with a record of 17-7, the Howland Tigers had a lot of momentum going into this girls basketball preseason. They made a statement Friday night in the season opener with a 56-24 win over the Lakeview Bulldogs at Howland High School.

“Our two veteran senior guards (Maria Dellimuti and Ashley Chambers), they’ve been starting for us two and a half years now,” Howland coach John Diehl said. “They played a lot when they were sophomores. If we can control the ball and play defense on their two best players, then usually it’s a good outcome.”

Howland (1-0) started off the game well on, an 11-2 run, to induce a timeout by the Bulldogs late in the first quarter and had a 15-5 lead going into the second quarter. Lakeview was held to only 19 points the rest of the game.

A key piece for the Tigers was sophomore Alyssa Pompelia, who had a game-high 16 points. She felt that it was important to get the season started on the right foot.

“It feels good,” she said. “We came back from last year, which we had a good season last year, (and) we started off good, and I think it’s going to be a good year.” 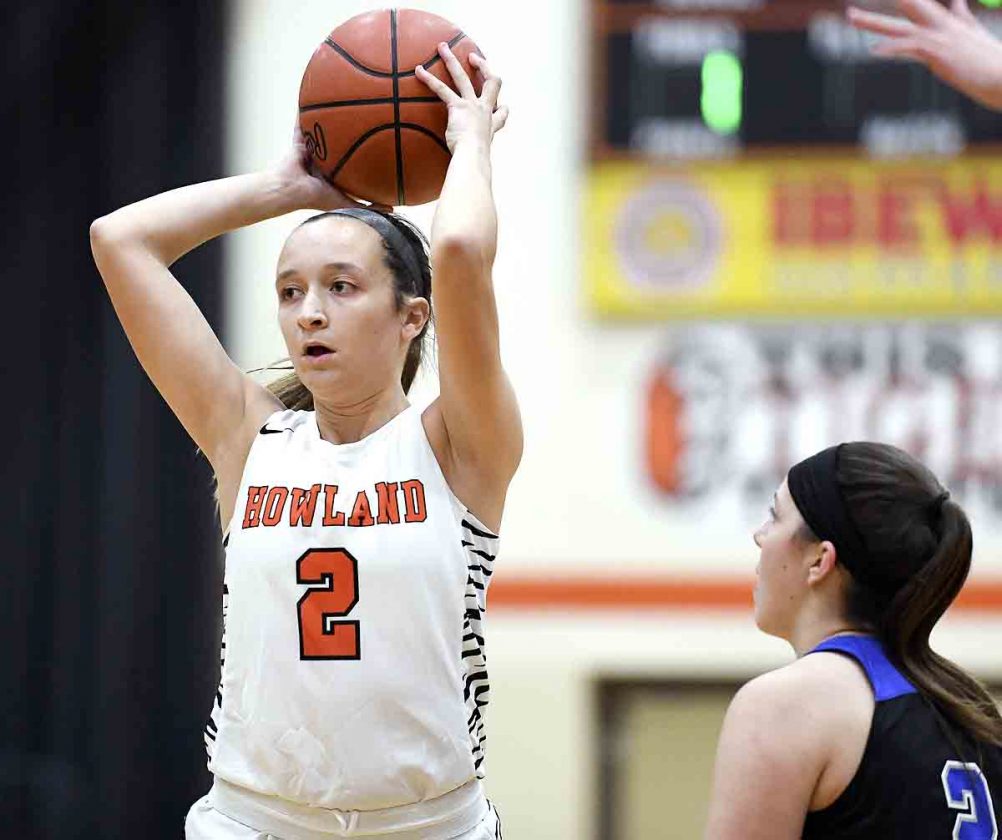 Correspondent photo / Robert Hayes Maria Dellimuti of Howland looks to pass the ball to one of her teammates during the first half at Howland High School.

Lakeview is coming off an 0-22 season, and first-year coach Kevin Haynie is trying to get his team established early in the campaign.

“Right now we’re trying to learn systems,” he said. “If you watch the game, you saw, we have people that still don’t exactly know what they’re doing.

“It’s just fundamental concepts still. We’re trying to start from scratch, build the program, get it stable, get everybody understanding their roles and build it up from there.”

Howland was in the double bonus during the first half and Diehl wants his team to take advantage of opportunities at the free-throw line.

“We already talked about that since the beginning of the season that foul shots are going to determine how many games we win and lose.” he said “Tonight I think we shot pretty good, so if we continue to do that, we’ll get some victories.” 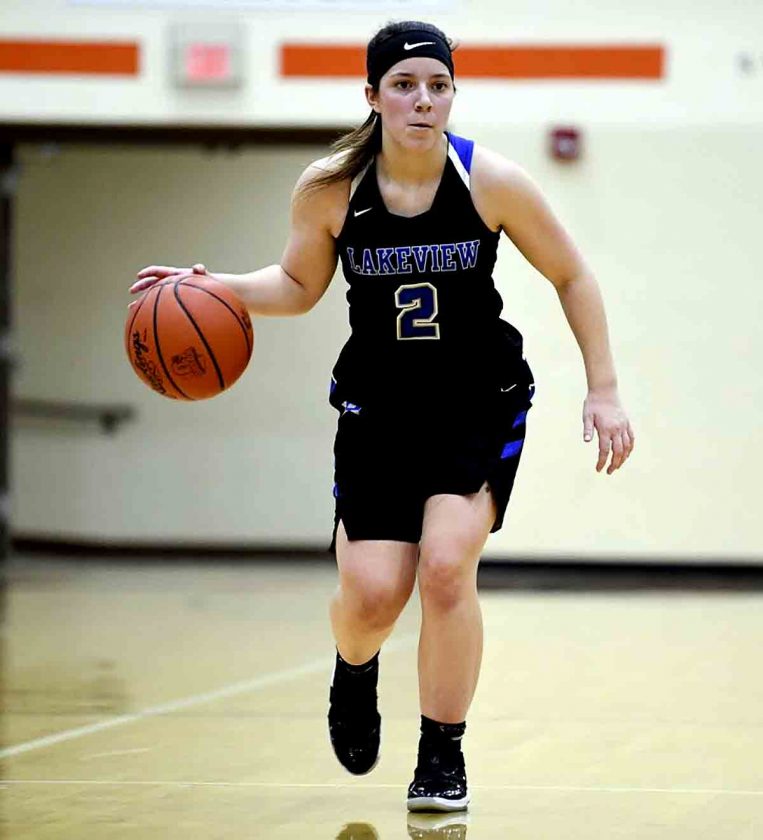 Correspondent photo / Robert Hayes Lakeview's Meg Zetterquist takes the ball up-court during the second half. She had a team-high eight points for the Bulldogs.

The Tigers were 13-19 from the charity stripe for a 68 free-throw percentage.

Although Lakeview (0-1) didn’t walk away with the win, Haynie felt his team played hard.

“Yeah, the score doesn’t look like it, but the kids fought. We had open shots that just didn’t fall. It’s tough playing here. It’s a different environment than we have at home. There’s a lot of things that are positive. I think my kids were aggressive on the boards. They were physical. They didn’t back down. There’s a lot of good things out of it.”

Senior Meg Zetterquist led Lakeview with eight points, including a pair of 3s. 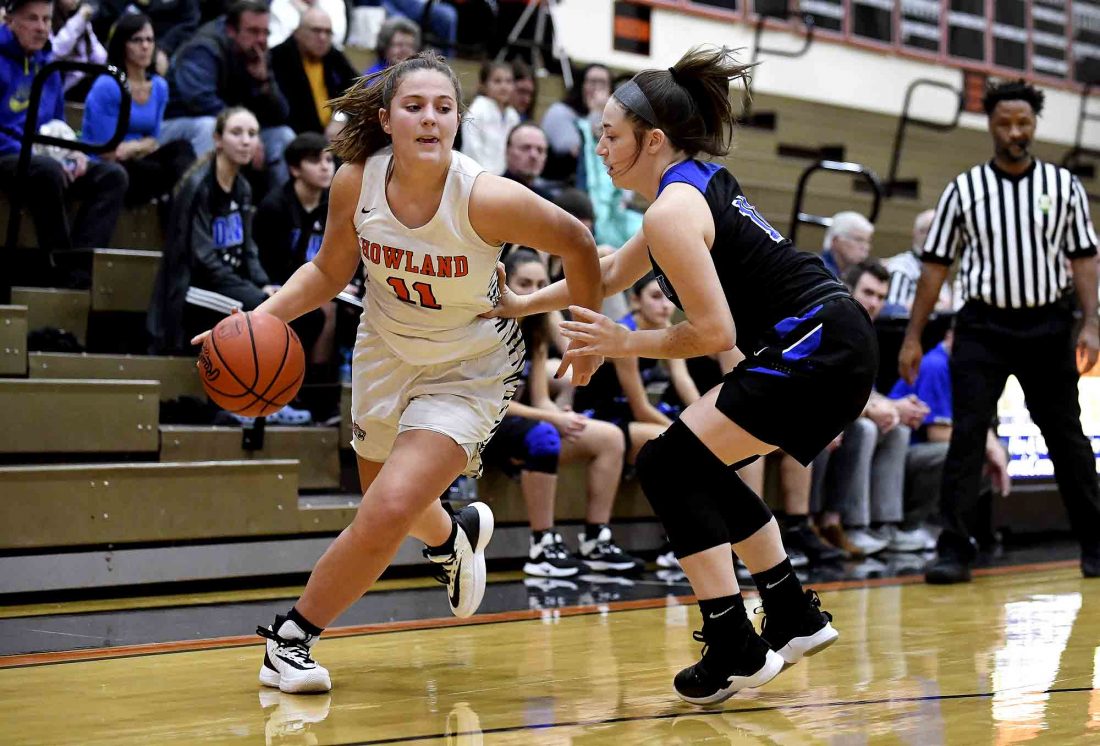 Correspondent photo / Robert Hayes Howland's Alyssa Pompelia, left, prepares to drive toward the paint against Lakeview's Melanie Wolf, right. Pompelia had a team-high 16 points in the Tigers' 56-24 victory over the Bulldogs.

Pompelia is looking forward to seeing what this season has in hold for the Tigers.

“I think it’s going to go good,” she said. “We might be so-so some games, but I feel like we can come out good and come out with wins.”