McDonald edged in OT by Lucas 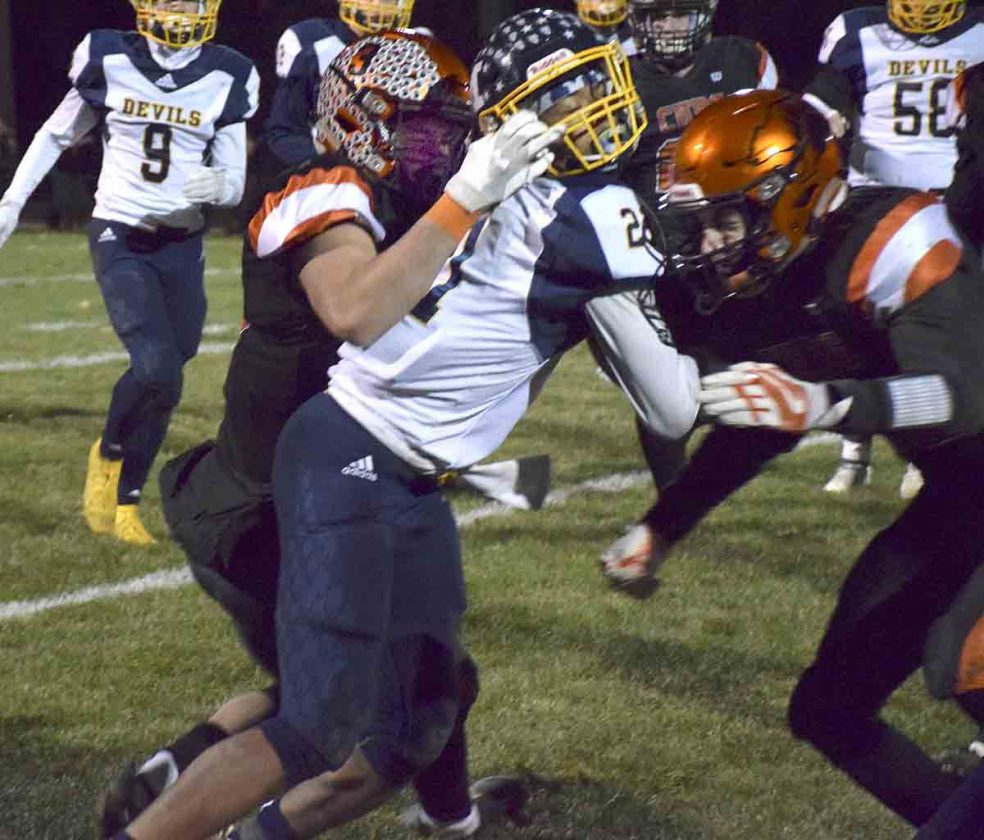 LUCAS — McDonald High School football coach Dan Williams looked over his team in the postgame huddle. He wished it was a different result, so did his players.

Senior speedster Cameron Tucker took the football from Dominic Schadl’s hands and started to head toward the Lucas sideline. Tucker turned up from there and dove toward the pylon, which he hit off a third-and-9 from the 19 in overtime.

The officials thought otherwise as the ball was marked at Lucas 1. Schadl, as he did twice before in Saturday’s Division VII, Region 25 quarterfinal, found the end zone.

The seventh-seeded Blue Devils were within one point of tying second-seeded Lucas and sending the game to a second overtime. Williams wanted to end this game with a two-point conversion.

Schadl took the snap in shotgun formation. He slightly moved to the right and saw Riley Lewis open in the end zone. The ball almost seemed tailor-made for this conversion play. A Lucas defender had other ideas as the ball was swatted to the ground, and the Cubs survived in overtime, 21-20. 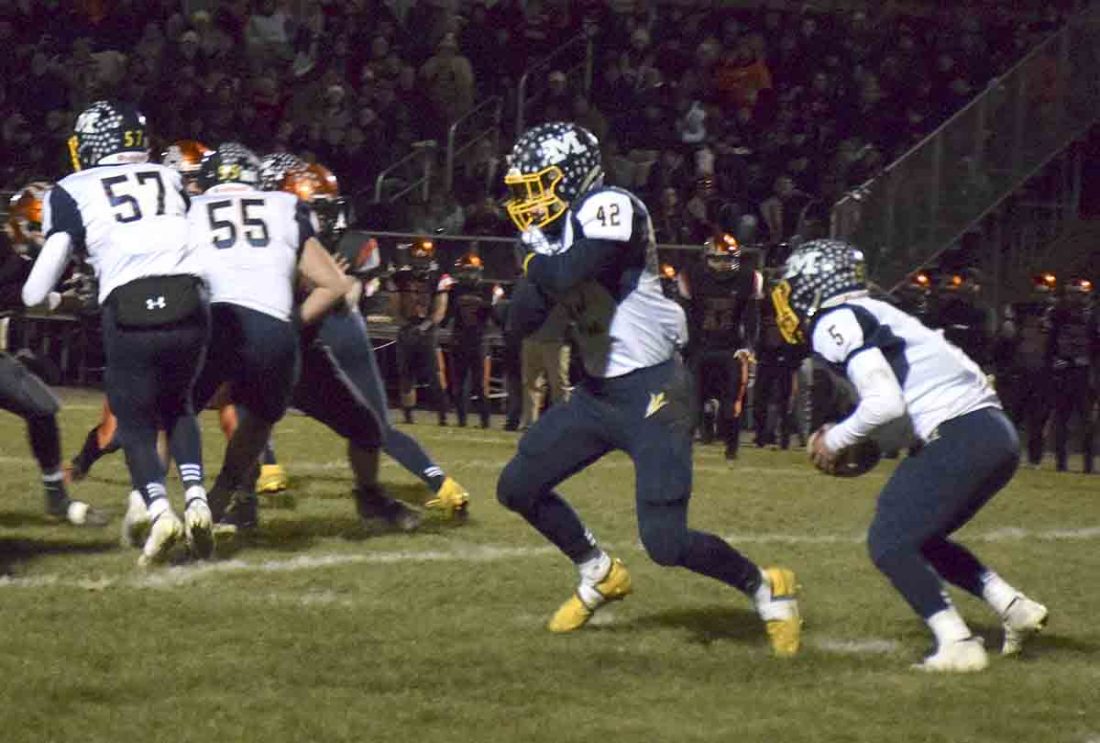 Schadl said his team was practicing that conversion play all week.

“I was supposed to roll out to the right and make them bite,” Schadl said. “I think their corner made a good play on it. It was man and he read it. He bounced off of him and made a good play.”

Williams told his players this one is going to hurt for quite a while. McDonald players were strewn over the grassy field in rural Lucas, feeling the temporary, insufferable pain of the defeat.

Ryder Dye and Tanner Kilbourne were the other two senior captains, along with Tucker and Lewis. This was a McDonald program that went 10-0, won the Mahoning Valley Athletic Conference title last season and upended Rootstown in a Division VI, Region 21 quarterfinal.

“It’s going to hurt for a while,” Williams said. “These seniors wanted it bad. They played well enough to win. They’ve had a heck of a career. You can’t ask any better for four kids to lead a football than the four we had.”

Schadl had 26 carries for 112 yards and three scores, while Tucker had six carries for 97 yards.

Tucker fought back tears after his final game in a McDonald uniform. The Blue Devils running back found holes and eluded the Cubs (9-2).

“Especially late in the game, I had to do everything I could to put this thing on my back,” Tucker said.

The Lucas tandem of the Ethan Sauder and Tommy Zirzow accounted for a bulk of the Cubs’ ball-control offense. They had 57 carries for 290 yards (Sauder with 27 carries for 148 yards, and Zirzow with 25 carries for 137 yards).

“They’re good runners,” said Williams, whose team ended the season 6-5. “It’s a difficult offense to defend. It’s hard to simulate. We did the best we could throughout the week of practice.

“Our kids left it all out there. That’s all we could ask.”

Lucas went three plays to start overtime as Sauder went from 9 yards out to cap the short series from the 20-yard line to take a 21-14 lead, prior to McDonald countering on the next series in overtime.

With McDonald leading 14-7, the Cubs countered in the fourth quarter as they went 10 plays in 89 yards, led by Logan Niswander’s 44-yard pass to Riley Mounts on third-and-5 from the Lucas 15 with about 6 minutes remaining. Sauder punched it in from one yard out with 3:45 left as the Cubs tied the game at 14.

Neither team could get much going in the remaining time of regulation.

McDonald had a third-and-11 with 8:31 left. Schadl found Tucker on a reverse. Instead of completing the turn in the backfield, he jetted up the middle of the Lucas defense where there was a sizable gap. The McDonald senior took off for a 60-yard gain to the Cubs’ 2. Schadl finished it off on the next play with the second of his three scores, with 8:10 remaining for a 14-7 lead.

The series before, late in the third quarter, McDonald started in good field position on its own 46. Lucas’ defense roughed up Schadl on a punt attempt with 42 seconds left in the third to put the ball at Lucas 40. However, the ball went back to midfield on the next play as McDonald was called for holding. The drive stalled, and Lucas took over at its own 30.

Williams, just like his team, is going to have problems getting over this loss as hugs were going around as rampant as running players were during the course of Saturday’s game.

“We had four good seniors that played their hearts out all year,” Williams said. “We were determined to have a successful year. We’ve got a big junior class and have a couple of good sophomores. They got 10 hard-fought games under their belt.

“You seen we’re battle tested. Kids laid it all out there. I couldn’t be any prouder.”