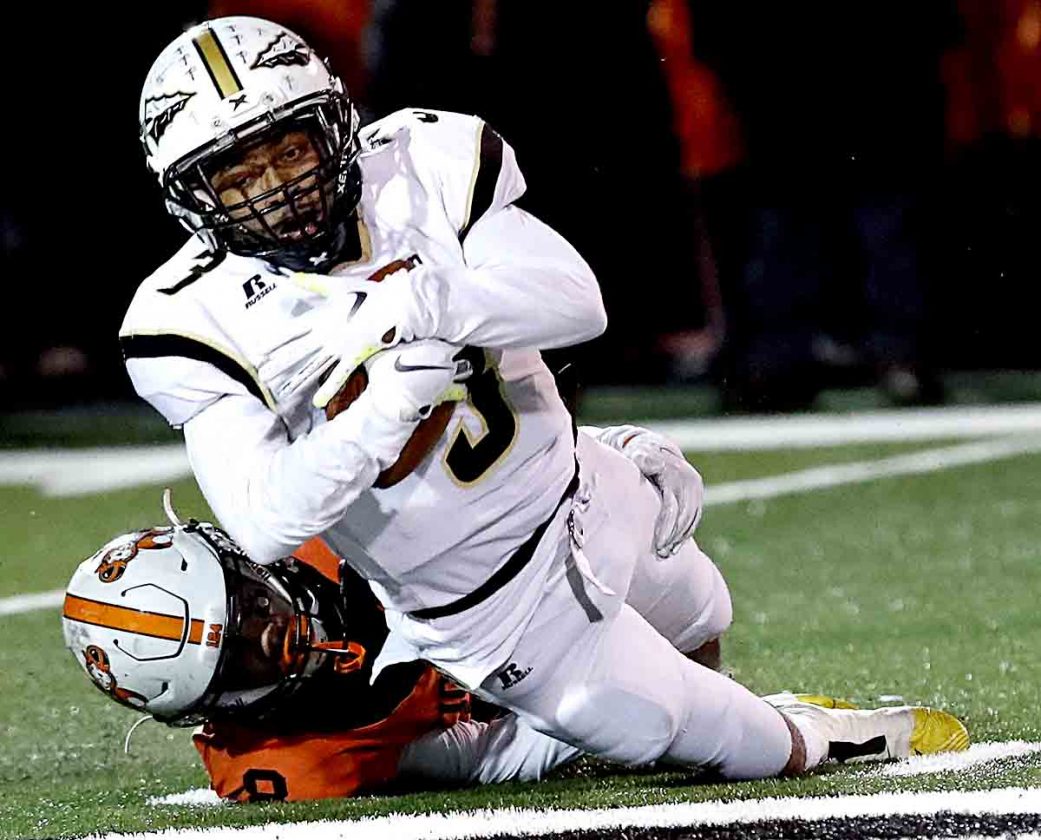 MASSILLON — The confidence of the Massillon Tigers extends beyond the field and all the way to the press box.

Late in the second quarter with the undefeated Tigers leading the Warren G. Harding Raiders by 27 points, the public address announcer informed the crowd at Paul Brown Stadium about ticket sales for the second round of the playoffs.

The confidence proved correct as the Tigers rolled to a 55-0 victory in the first round of the Division II, Region 5 playoffs. The win mirrored a 49-7 Massillon win over Harding in a Week 3 game of this season.

The Tigers (11-0) made an early statement when Terrence Keyes ran 75 yards for a touchdown at the 8:13 mark of the first quarter. A bad snap ruined the point-after attempt.

The Raiders, who finished with a 7-4 record, had two chances to tie or take the lead but failed to score both times. Jabari Felton recovered a fumble by Keyes at the Tigers’ 32. Consecutive penalties on Harding moved the ball back to the 43, leading to a punt that pinned Massillon at its 2. 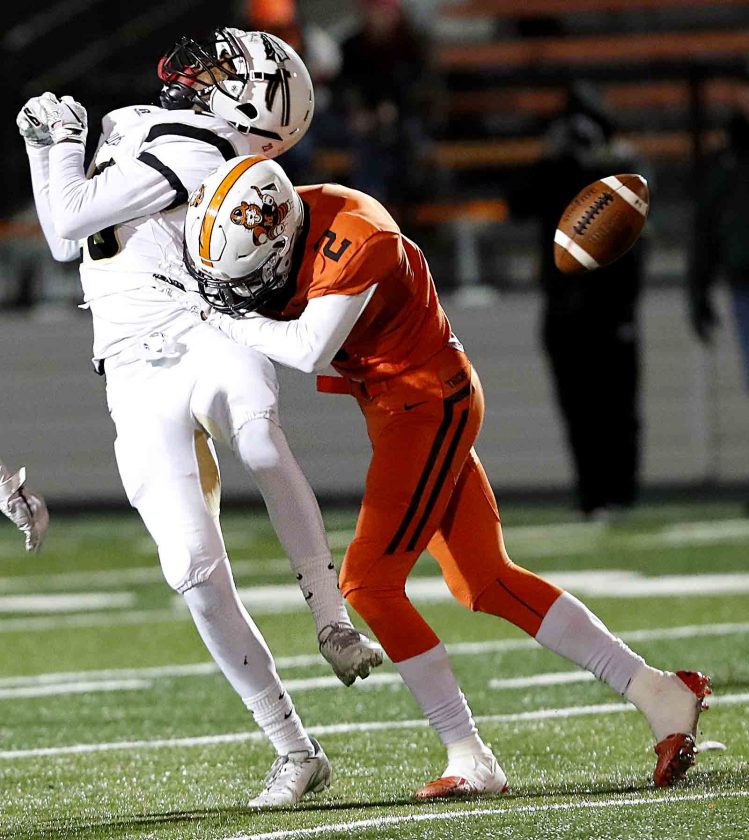 Harding’s defense then forced a punt on three downs. The Raiders assumed possession at the Tigers’ 37, but a high snap on first down pushed the ball back to the 48, leading to another punt.

It was all downhill from there for Harding. A 75-yard scoring run by Keyes extended the lead to 13-0. Quarterback Aiden Longwell connected with Jayden Ballard on a 58-yard scoring pass, and Zion Phifer ran 10 yards for a score as the Tigers took a 27-0 halftime lead.

“I’m at a loss for words right now,” Raiders coach Steve Arnold said. “I thought we prepared well, but you can’t make mistakes against an excellent football team. This is what you get when you make mistakes.”

The statistics showed the dominance of the Tigers, who led Region 5 in computer points. They had a 347-73 advantage in yards, including 207 on the ground compared to minus-26 for the Raiders. Keyes, a talented senior running back, finished with 196 yards on nine carries.

“They play in spurts offensively, and you can’t get caught up in trying to keep up with them offensively,” Arnold said. “Secondly, when you have an opportunity to score, you can’t have bad snaps and penalties.” 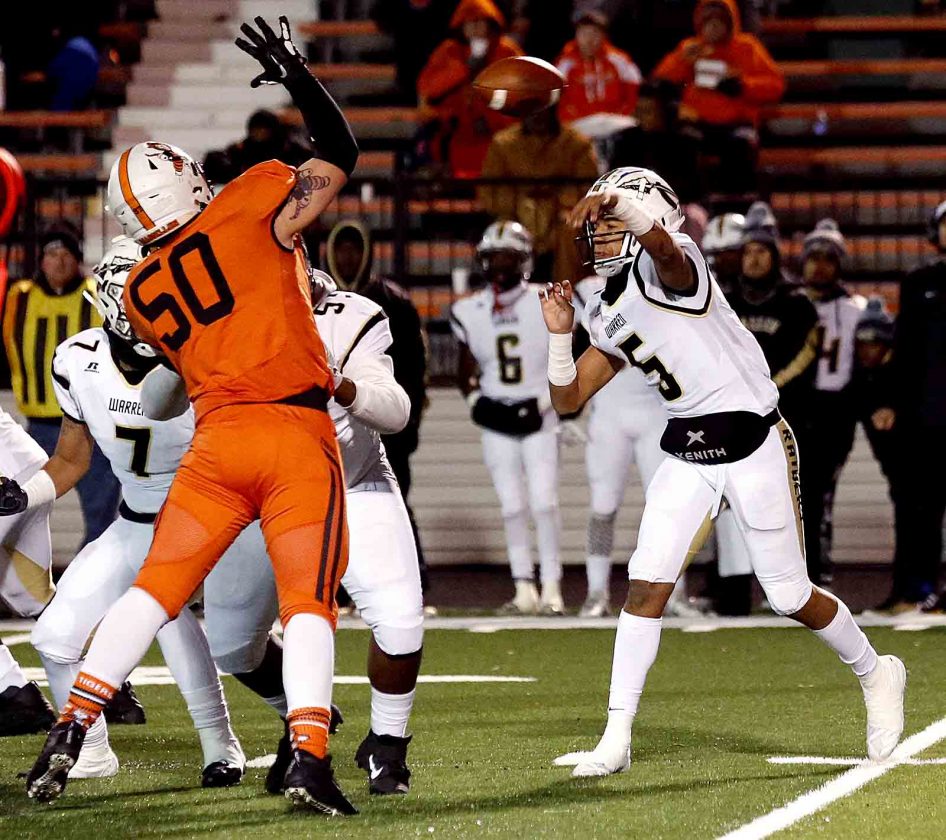 Harding earned the eighth spot in Region 5 with seven wins in the regular season. The losses were to perennial powers Massillon, Canton McKinley and Akron St. Vincent-St. Mary. The two defeats to the Tigers were the only lopsided scores all season.

After the game Arnold told the players about the importance of taking the next step in trying to reach the level the Tigers show regularly on the field. While it was a winning season for the Raiders, there was more that needed to be achieved.

“For my standard it was an above average season,” Arnold said after a few seconds to ponder the question. “Any time you get to week 11, you feel good about it. With only having three returning starters, I knew we were going to have ups and downs. I guess the good thing about it is we’ll have a lot of returning starters next year.”

A 3-yard touchdown run by Keyes and the point-after by Alex Bauer increased the advantage to 34-0 and moved the game to a running clock with 8:27 to play in the third quarter. Things went from bad to worse on the first play of the ensuing possession when Caiden Woullard recovered a Harding fumble and returned it 22 yards for a score as the lead moved to 41-0.

Harding quarterback Elijah Taylor fumbled when sacked on the first play of the next series and the Tigers recovered. The turnover led to a 4-yard touchdown run by Raekown Venson.

The struggles continued for Harding on its next possession when Ty Artis fumbled after hauling in a Taylor pass. Backup Tigers quarterback Zach Catrone connected with Eric Thurman on a 30-yard scoring play.

The Tigers, who are in search of their first state championship since the playoff system began in 1972, will play Massillon Perry in a round two game on Friday.

“I told (Tigers coach) Nate Moore to ‘go out and win the state championship on the field,’ “ Arnold said.