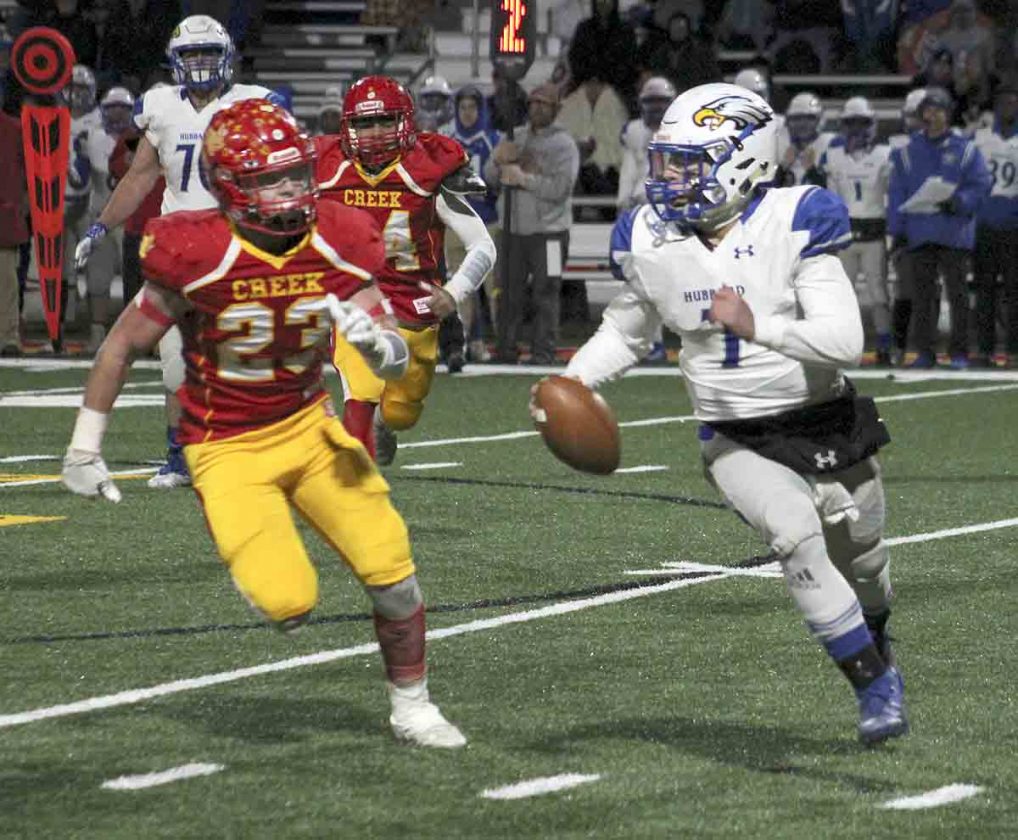 WINTERSVILLE — The wait is finally over and it ended with one fantastic finish.

“I can’t put into words how happy I am for that football team of my mine and for our entire school district,” Indian Creek coach Andrew Connor said after his Redskins improved to 10-1. “We’ve waited a long for time for this. To win a game this way, in this fashion, with all the electricity that went on in the fourth quarter — it’s one of those nights we will never forget here.”

Hubbard, which played for the regional championship in 2018, drops the curtain at 6-5.

Hubbard, which led 14-10 at the half, stretched its advantage to 21-10 on a third-quarter touchdown run by senior quarterback Cameron Resatar.

Creek sliced the deficit to 21-16 with 10:49 remaining on a 5-yard run by senior tailback Trevor Fante. Hubbard’s receiver bobbled the ensuing kickoff and Brandon Fleming fell on the ball in the Eagle end zone. Thanks to 12 points in 10 seconds, Connor’s club led 22-21. Both two-point conversion plays failed.

Hubbard started its next possession at its own 13. This time, Resatar lost possession of the football and Creek’s Garren Swickard recovered it at the Eagle 23. Six snaps later, Fante plowed over from 3-yards out. Brandon Hiles’ boot made it 29-21.

The Eagles, however, weren’t ready to quit. They marched 65 yards, consuming a little more than five minutes, to tie the score with 38 seconds remaining. Hubbard’s touchdown came on a 16-yard pass from Resatar to Thomas Wess. Resatar added the two-point conversion to knot the score.

Creek’s Jonathan Giusto then delivered another huge special teams play, returning the Hubbard kick 44 yards to the Eagles’ 46. Mazur found Sam Baksa for 15 yards on first down. After spiking the ball to stop the clock, Mazur burst through the Hubbard defense and delivered the game winner.

Resatar paced Hubbard with 111 rushing yards on 18 carries. He threw for 124, completing 12 of his 17 passes. Dean Thomas had eight catches for 75 yards. Sophomore running back Timothy Caffey collected 85 rushing yards before suffering an injury and missing the second half.