Howland has overcome plenty of obstacles

For a team that is now 20-0-1 and playing in its first final four, one would think that the journey wasn’t filled with obstacles and challenges.

However, that isn’t the case for the Howland boys soccer team, which has overcome some issues and also needed a 1-0 shootout win (4-2 in penalty kicks) last weekend against Notre Dame-Cathedral Latin to get to this point.

“We’ve had a few injuries and a lot of adversity throughout the year,” Howland coach Brian Stiles said. “Every step of the way, the kids kind of rose to the occasion. We’re hoping that goes on another week.”

For it to continue, the Tigers will need to get past the Lexington Minutemen on Wednesday at 7 p.m. at Barberton High School.

“I know with this squad, no matter what the challenge is, they’re going to rise up to it,” Stiles said. “The first thing we teach is that we love competition in our program. Every day is a competition because we have a lot of good players. A lot of these kids want to test themselves against the best players in the state. We’re looking forward to it.”

The Minutemen (22-1) were ranked fifth in the state in Division II in the final poll by the Ohio Scholastic Soccer Coaches Association. They have 12 shutouts on the year and have given up just 19 goals while scoring 126.

“When you get to this level, you’re going to play one heck of a team no matter who you’re facing,” Stiles said. “This one looks to have a stellar attack coming at us. I’m sure the defense isn’t any worse than the attack.

“I think they are pretty solid top to bottom. They have 15 seniors who have played together for quite a while. This is something they’ve been building towards. It’s going to be a great challenge for us.”

The Minutemen are paced by junior Ryan Parker, who led the team to a district title a year ago and was the Ohio Cardinal Conference and District Player of the Year.

The Tigers have their fair share of standout players who have helped produce the best season for any team under Stiles.

“I’ve coached for quite a long time,” he said. “I knew this team was a little bit different than all the rest. I made mention to another area coach early in the season, I think this team has enough talent to get to state. Then when we went through (losing) some really key players, I didn’t know if we could get that level back in time.

“I think a lot of them came back refreshed with a lot of energy compared to the guys that would have played 20 or 21 games. I do remember though saying that this could be the first team that goes to state. It was just something different in practice. We had a quicker speed than what I had seen from some of our other teams over the years.”

Howland has 13 shutouts on the year with just eight goals allowed. Centerbacks Peter Lerakis and Pano Gentis have had monster seasons for Howland, which has scored 71 goals on the year.

“Most of our high goal-scoring players are juniors,” Sperling said. “They’ve really found their footing. Jordan started off the year at striker and then he went back into the midfield. When we were going through having a lot of players going down with injuries, that held back his goal-scoring total.

“As we’ve gotten a little bit healthier and getting everyone used to playing together again, he’s been able to press forward a little bit more. I think he had three goals in the district final. He’s very deadly accurate in front of the net.”

Stiles feels confident in how his team will respond Wednesday night. They’ve been doing it all year when injuries hit and when they were sputtering in his opinion during the middle of September with other activities.

“I think it was at a point where we had three guys go down,” he said. “When this team was at full strength, this team was a state-level team. We kind of sputtered through 1-0, 2-1. I think that actually what happened was we got a little more depth because kids who might not have gotten as much playing time did. It kind of worked out for us, not that we wanted to go that way.”

The team beat South Range, which is playing tonight for an opportunity to reach its second state championship game in Division III.

They’ll need to play at that level to beat Lexington, which beat perennial power Bay to get to this point.

“We talked about this before we played CVCA, we just have to keep chasing getting better,” Stiles said. “We need to be the best team that we can be. When you get into these games, you can game-plan and do everything you want to do, but until you get into the game, it usually ends up how well you can adjust and how well the kids adjust to what needs to be done.

¯ KENNEDY 71, CANTON CENTRAL CATHOLIC 65: WARREN — The Eagles fired off a 22-point fourth quarter to come back ... 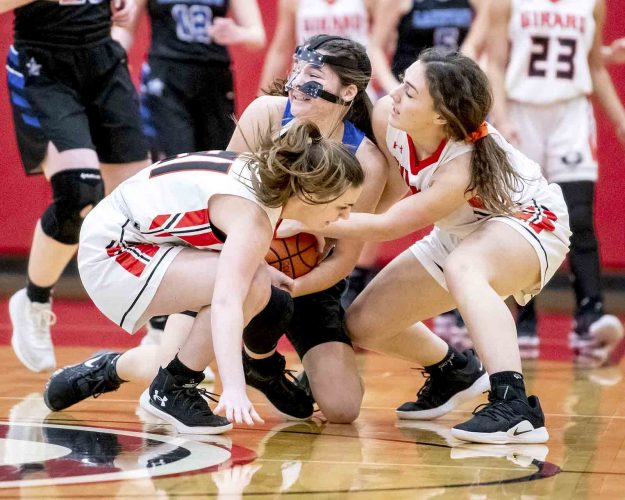