COLUMBUS — Sometimes the bounces go your way and sometimes they don’t.

It was the latter for the Howland High School boys soccer team on Sunday, as the Tigers lost 1-0 to Tipp City Tippecanoe in the Division II state championship at Mapfre Stadium in Columbus.

It was the first loss of the season for Howland, which finished 21-1-1.

“In a game at this level, against another great team, it usually comes down to one team taking advantage of a fortunate bounce or even to PKs,” Howland coach Brian Stiles said. “We can’t complain because we had a lot of those ricochets go our way this year. It’s just soccer and those types of things usually even out.”

The Red Devils, who finished 23-0-1, scored with 12:27 remaining. Andrew Baileys began the play with a throw-in and Keaton Jackson flicked the ball into the box. Howland tried to clear the ball, but Tippecanoe’s Aaron Davis blocked the clear, then fired a shot that deflected off a Howland defender past goalkeeper Lucas Brill. 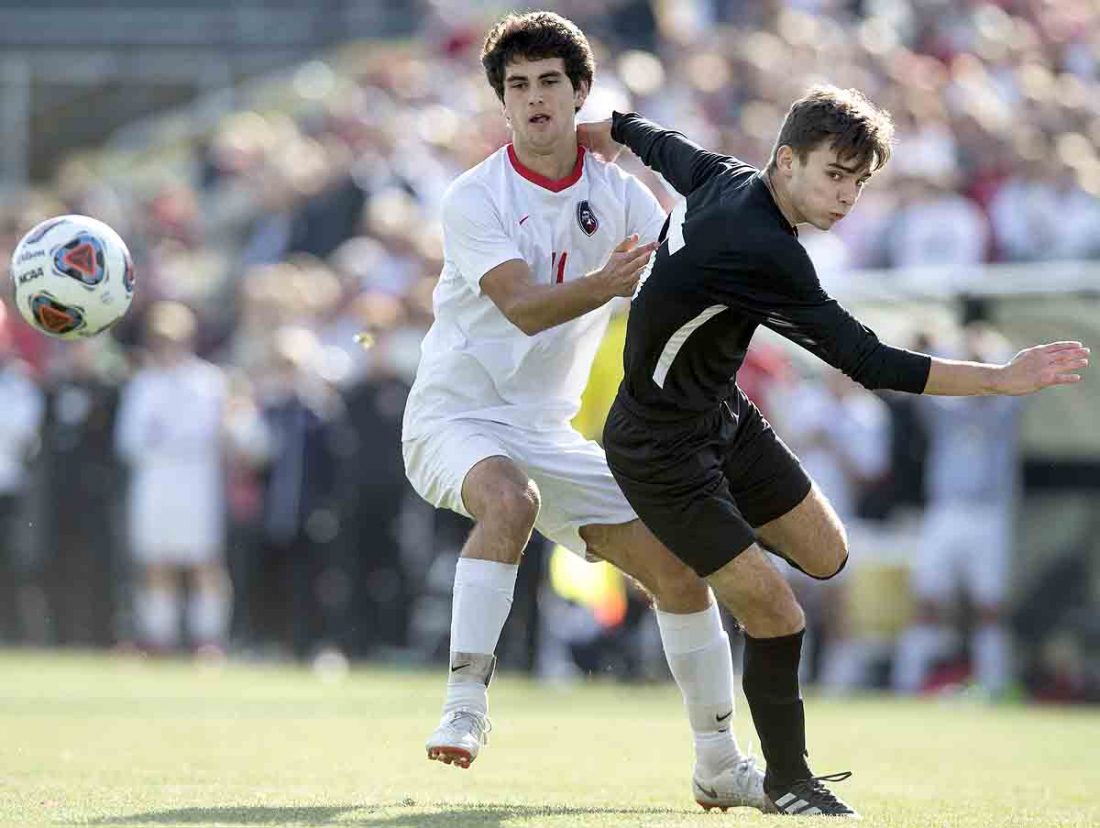 “We were kind of hanging on a bit and I would’ve like for us to get to overtime and see what happens from there. Coming in, we were fearful of their restart game because they were probably the biggest team we’ve seen at the Division II level. We knew if they kept throwing that ball into the box eventually something bad was going to happen.”

According to Tippecanoe midfielder Jake Rowland, the shot likely would’ve been right at Brill, but the deflection was the difference.

“We knew their throw-ins were massive,” Howland senior defender Peter Lerakis said. “Those guys are all big, can throw it 30 or 40 yards, and then they have height in the box that can get you. They’re great in the air. They got it into the 6-yard box, we tried to clear and it went right to (Davis) and his shot went off one of our guys.”

Howland applied extra pressure and had the ball in the box a few times in the final three minutes, but couldn’t take any clear shots.

“As easy as it was a 1-0 win for them, it could’ve been a 1-0 win for us had we gotten a good ricochet,” Stiles said. “When you win 21 of 23 games and never lose until the last one, it’ll be a lot easier looking back at the season and feeling good about it in a few days. But our guys are hurt right now. They certainly wanted this one today.” 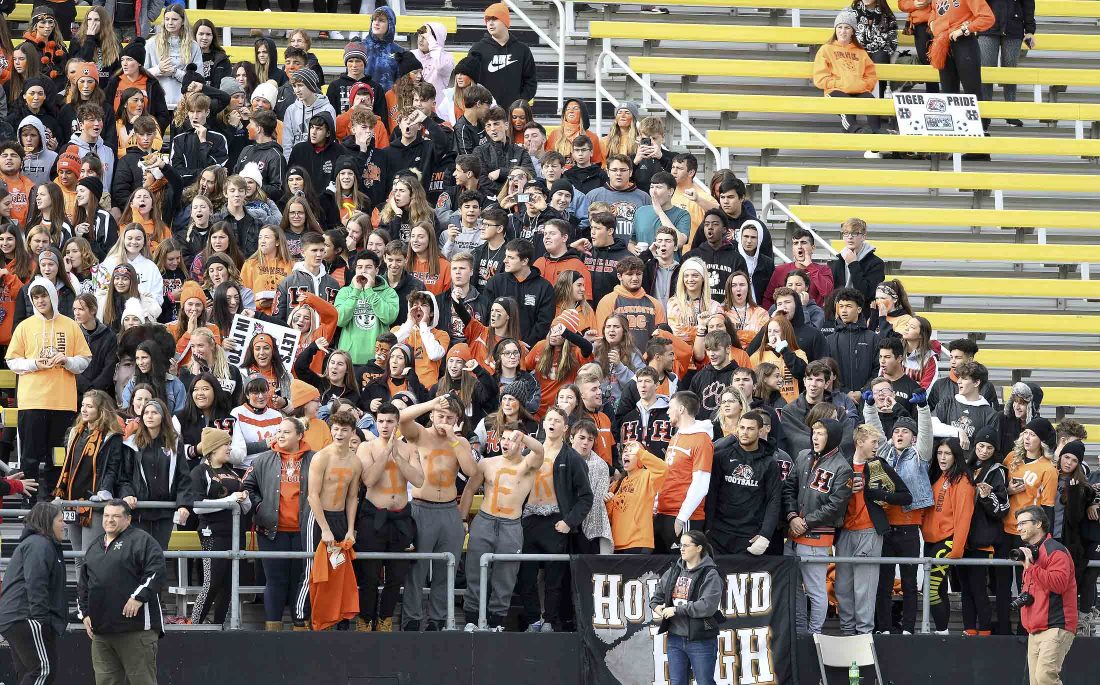 The Tigers were outshot 12-6. Brill and Red Devils goalkeeper Adam Trimbach both had three saves. Howland had a 5-4 advantage in corner kicks and Tippecanoe was called for 12 fouls while the Tigers made just six.

Howland will be hungry again next season, as this season was fueled by a loss to Hubbard in the district last year.

“We fell short in districts last year, so we didn’t just take one step forward,” Lerakis said. “We made it to regional, through regional and to the state championship match. It was a great year for the program, but we just fell short today against another great team. Still, it was an amazing season and an amazing feeling out there today.”

Lerakis was one of nine seniors on the roster. 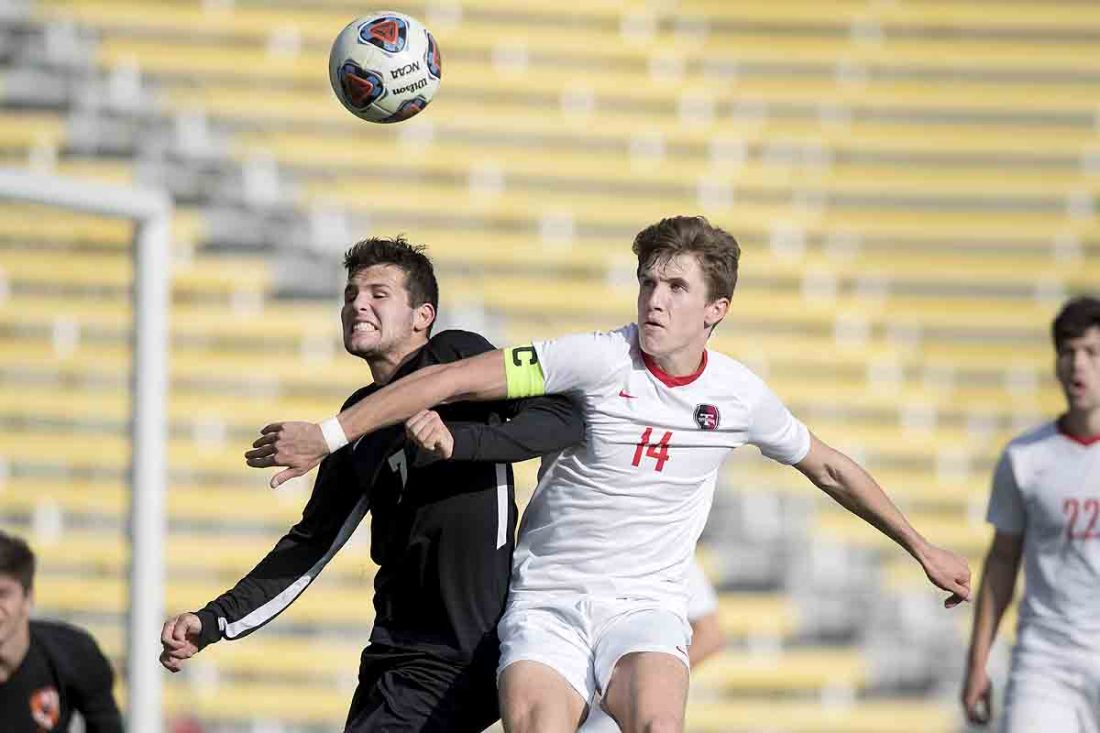 Correspondent photo / Robert Hayes Conor Burwell, left, of Howland battles a Tippecanoe player on a header atteempt in the Tigers’ 1-0 loss on Sunday.

“We worked so hard this year and it showed in the tournament,” said senior defender Pano Gentis. “I’m so proud of all the guys, all our seniors. We’ve got to keep our heads high. When you can get into a game like this it shows everyone in the community, especially the kids that are coming up, that there is hope. They can do this.

“Our area hasn’t had much success, but this year proves you can do it if you work hard at it. Once the success starts, you want to just keep building on that.”

Stiles remembers having a similar sentiment after the 2017 season.

“We talked about this in 2017, when they knocked down a barrier and we got to a regional,” he said. “Those seniors built new dreams for us. Well, now this senior class built new dreams for us moving forward. It would mean one more win and maybe a perfect season. Those are extremely big dreams, but at least now we see those dreams can be realistic.”

All in all, playing in a state final should be a very positive event this year, according to Stiles.

“Where else would you rather be,” he said. “This is the ultimate goal — playing the last day of the year in a championship game with two undefeated teams going at it.”