Newton Falls stopped by Dalton in 3 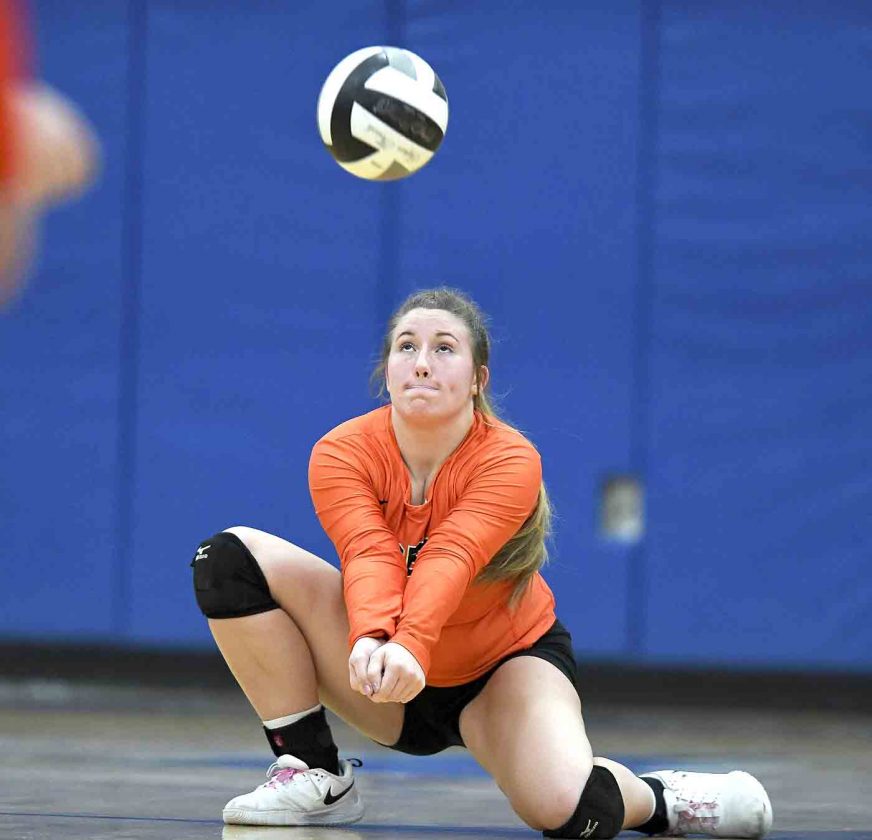 Correspondent photo / Robert Hayes Atlanta Spahlinger of Newton Falls digs the ball out during the third set of the Tigers’ 3-0 loss to Dalton in a Division IV regional semifinal at Uniontown Lake.

UNIONTOWN — The Newton Falls Tigers volleyball team has had hitters like Gabby Kline and Izzy Kline over the past few years. Those teams had undefeated seasons and played for district titles.

But it wasn’t until this season when they moved down to Division IV that they were able to play in a regional tournament for the first time since 1991.

Unfortunately, their season ended Thursday night against the Dalton Bulldogs in a 3-0 sweep in a Division IV regional semifinal at Lake High School.

“I’m as proud as I can be of them,” Newton Falls coach Kristina Baker said. “They had a great season. The nerves were there, but they were excited. We tried to put together what we could.”

Elizabeth Barreca, Breeana Hutson, and Courtney Hankins led a team with 831 kills between them. 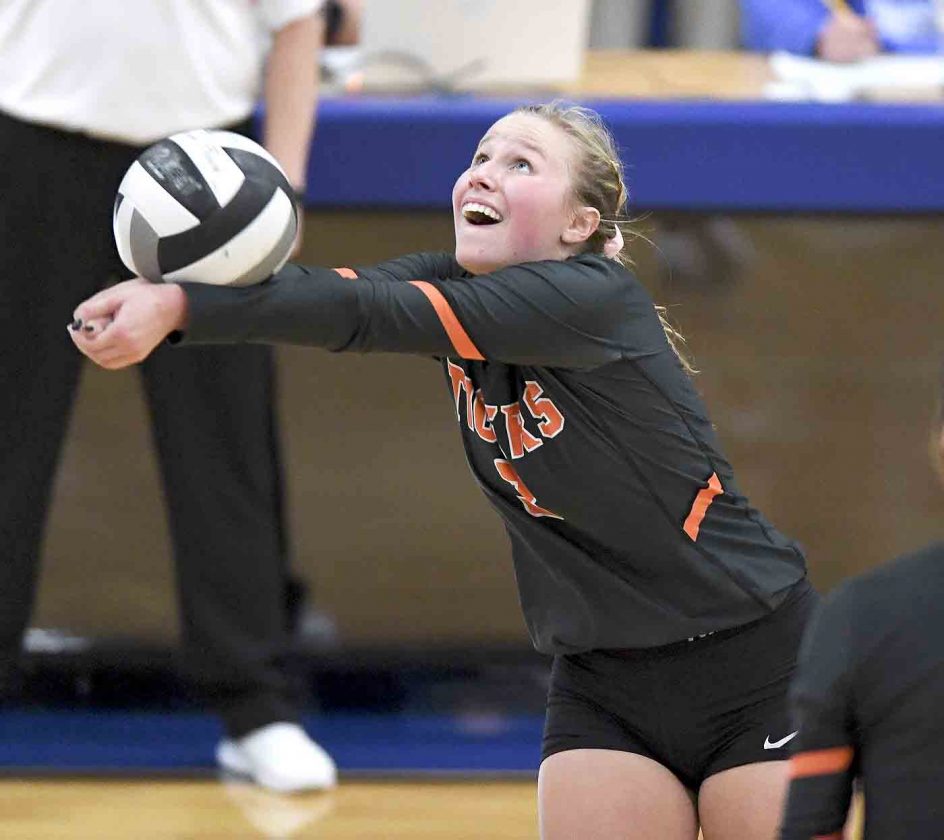 Correspondent photo / Robert Hayes Senior Allison Sembach of Newton Falls passes to a teammate Thursday during the third set of the Tigers’ loss to Dalton at Lake High School.

“I’ve had three solid hitters we’ve depended on all year,” Baker said. “There were moments where we had some hits, but then there were some unforced errors.”

Those kills were down on Thursday as Barreca finished with seven kills and Hutson and Hankins added six and two, respectively.

“We had our moments, but then we had a couple of moments where we got caught up in the moment,” Baker said. “It’s just a shock when you are out there in this environment. Our everyday volleyball games aren’t like this. It’s a whole different environment. 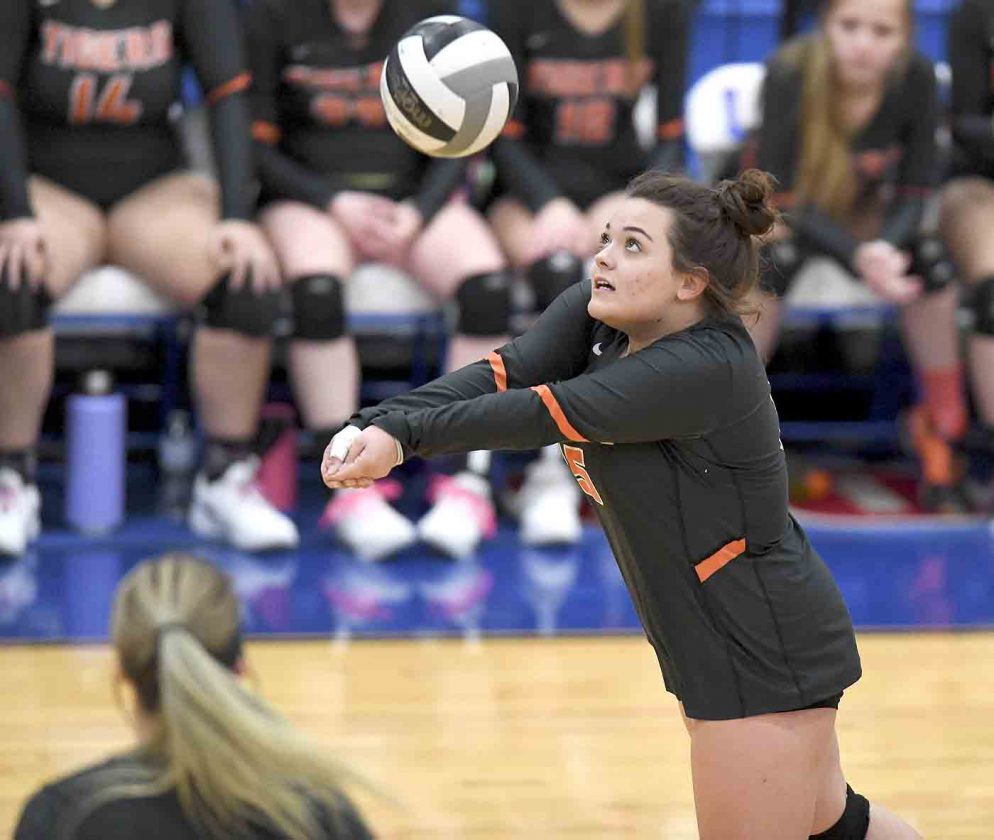 Correspondent photo / Robert Hayes Senior Keaghan O'Connor of Newton Falls passes to a teammate Thursday during the third set of the Tigers’ loss to Dalton at Lake High School.

That momentum carried over into the second set as the Bulldogs jumped out to a 10-0 advantage to win the set 25-14.

Those runs were the Achilles heel all night for the Tigers (18-8) as they played even with the Bulldogs at times, but always seemed to have to play catch-up.

“We just couldn’t pull those moments together,” Baker said.

Dalton coach Allison Hostetler credited the speed that her team plays with for contributing to the success they had.

“All year long, we’ve had a fast offense,” Hostetler said. “A lot of teams we’ve played, they don’t seem to be able to keep up. I thought they did a great job of stopping some of our hitters. We did a good job of not letting down.”

Dalton’s middles played tough and even when Newton Falls was within 15-13 in the final set, the Tigers couldn’t sustain the pressure to get over the hump.

“We got a little bit tense back there,” Hostetler said. “Our passing is usually pretty great. It took us a while to really settle into it. Once we were able to really control, that usually starts our offense. You have to pass before you can attack the ball. Then our hitters are really able to shine.”

The Bulldogs were able to battle back and closed out the set on a 7-3 run and will advance to play the Monroeville Eagles in the regional final.

“I thought they were really scrappy,” Hostetler said. “They weren’t letting any of the balls drop to the ground. If something was going to go down, we had to make sure we kept watching. They did a good job of continuing to go after the ball.”