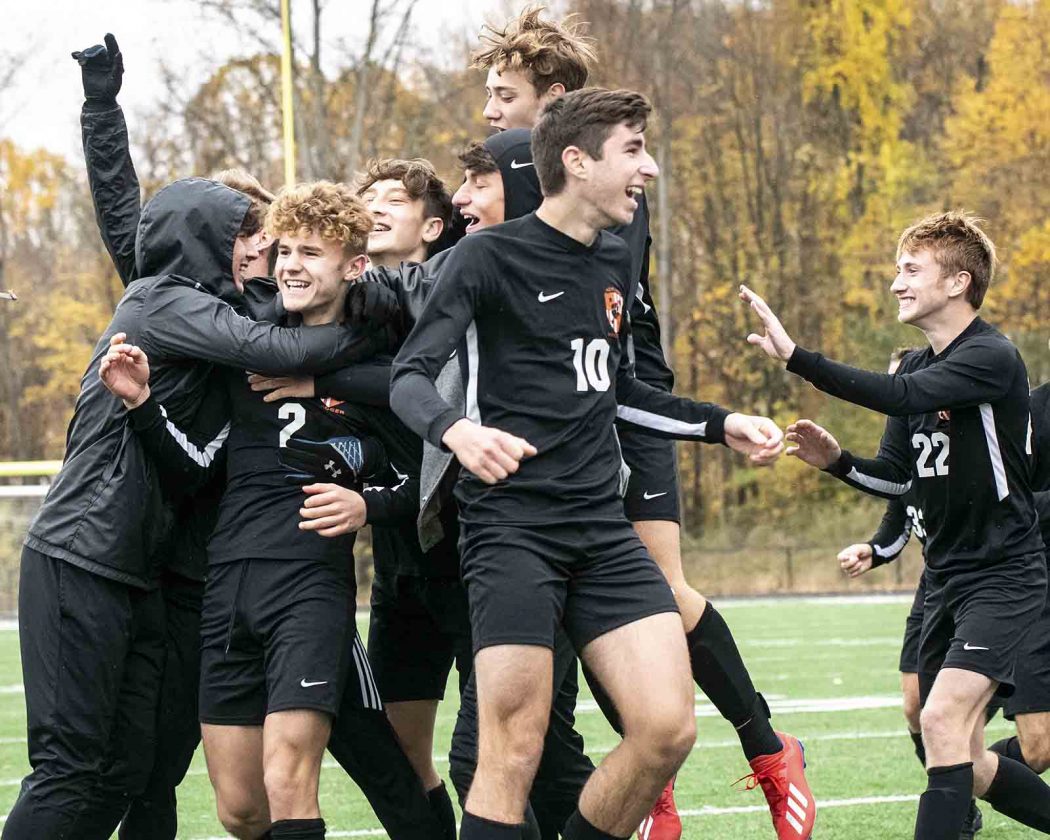 Correspondent photo / Dianna Oatridge Howland’s Jordan Sperling (2) is mobbed by his teammates after scoring the winning penalty kick against Notre Dame-Cathedral Latin in the Division II regional final on Saturday at Streetsboro.

STREETSBORO — After playing 110 minutes of scoreless soccer at Quinn Field, it came down to penalty kicks to see who would win the Division II regional final between the Howland Tigers and the Notre Dame-Cathedral Latin Lions.

In the end, the Tigers outlasted the Lions 4 to 2 in penalty kicks to win 1-0 and advance to the Final Four for the first time in school history.

“We’ve never gone this far,” Howland coach Brian Stiles said. “We’ve been really good for quite a while. I think we were just caught being the smallest team in Division I. Now, we’re Division II, everyone sees what kind of quality soccer we’ve been playing.”

The Tigers also became the first Trumbull County boys or girls soccer team to make it to the state final four.

“It feels great,” Stiles said. “It’s great for the program. We feel we are getting lucky with these penalty kicks. I love it. I’m excited for the guys.” 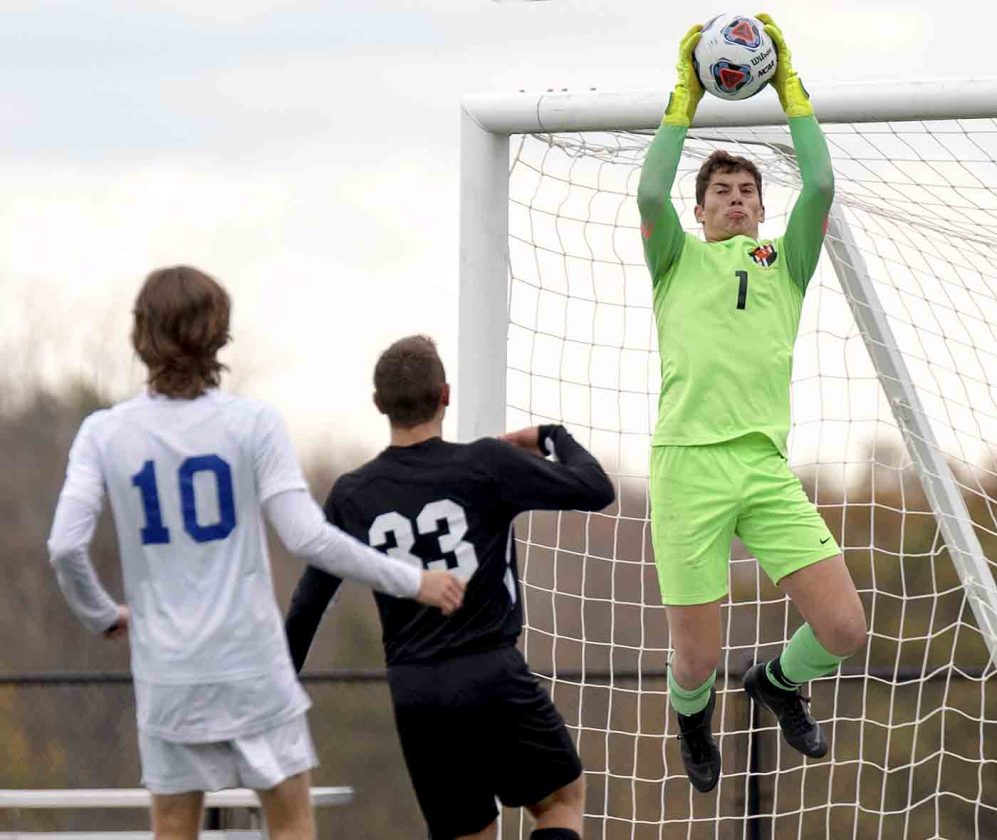 Goalkeeper Lucas Brill came up strong with three saves in the first half. He had 10 for the game.

“He’s had a great year,” Stiles said. “We see it in practice every day. We know how good he is. It didn’t really surprise me. He’s just an outstanding player.”

Howland continued to have near misses throughout the second half.

In soccer, there are 50/50 balls and that seemed to pertain to the Tigers’ shots all afternoon. 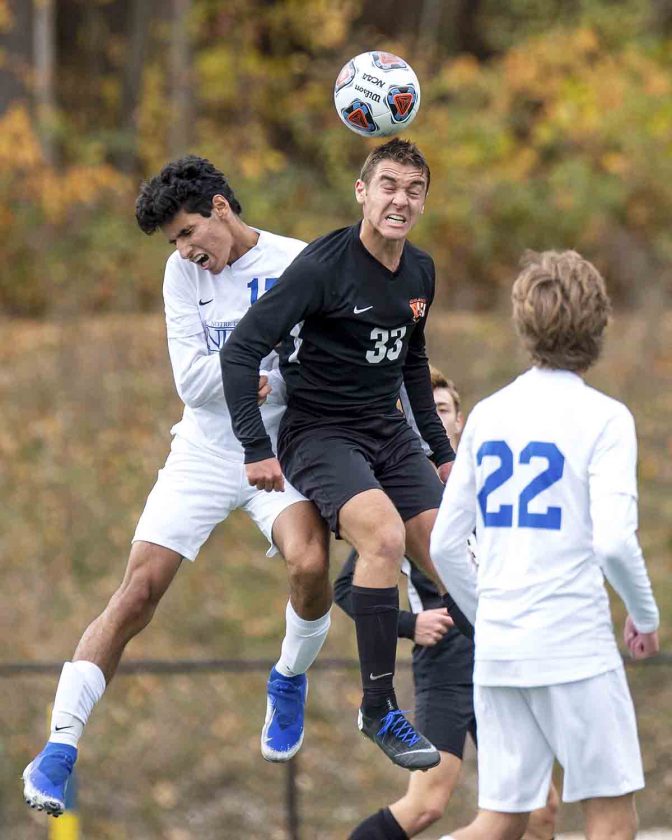 In a three-minute stretch, Howland had three shots nearly go in. Instead, the game stayed scoreless.

“We didn’t have our best game today,” Stiles said. “We just seemed to get out of our game plan a bit. A lot of that is a credit to NDCL. They came out and were physical with us. They really took the game to us.”

Still the Tigers held their own even though they played nearly 30 minutes of the second half 10 against 11 after a player received a red card.

“That’s a gut-check there,” Stiles said. “This team has overcome any obstacle. That was a big one today and they came through.

“So, I’m thinking at some point, we were going to take our shots when we could get them. We almost got one. The goalie for NDCL made a great play. For the most part, we were thinking towards the end of the second overtime, that penalty kicks were our best option. 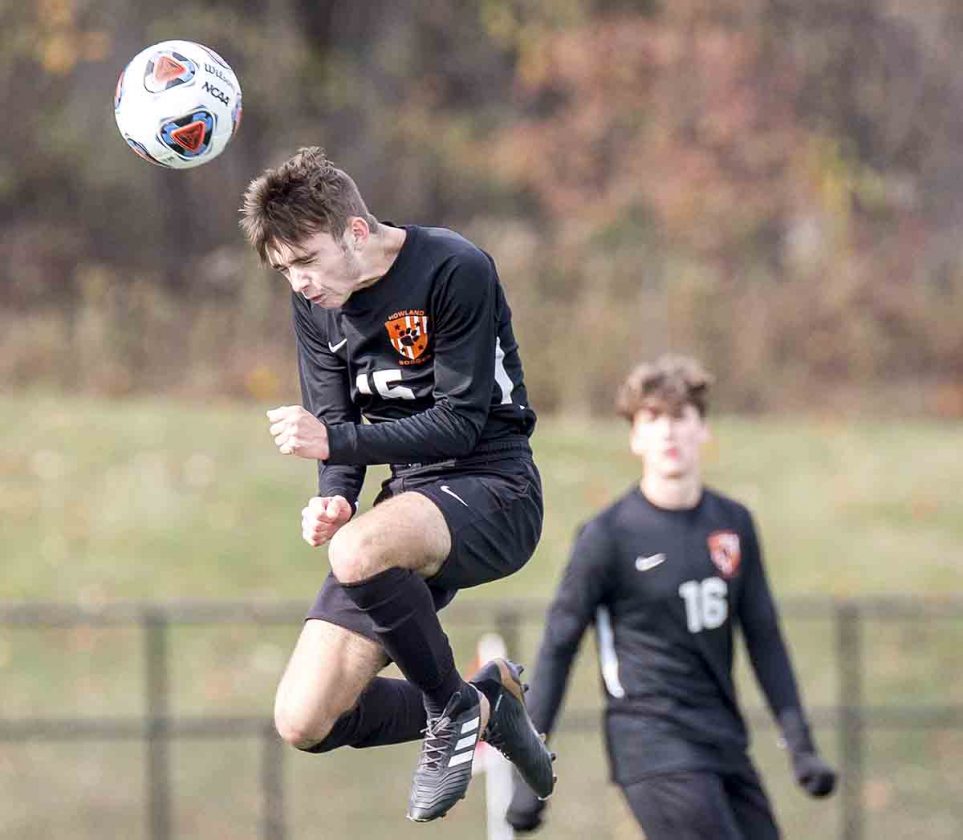 In this first overtime session, the Lions had four shots on goal while the Tigers’ one attempt was wide right.

Tthe Tigers had two shots on goal while the Lions had none in the second overtime.

In the penalty-kicks session, Brill blocked shots from Emilio Spetic and Eric Echanove while, Pano Gentis, Gabriel Altawil and Austin Stassinis got goals to make it 3 to 2 Howland with Jordan Sperling up to either send the Tigers to the final four or to see if Brill had another save in him.

“When we get into penalties, I try to stay as focused as I can,” Brill said. “I try to let people see that fire in my eye to get them a little nervous, a little scared. I feel like I did that. I got them nervous. I could read them. I read them a few times.”

With Sperling up, his kick got past Garrett Sah and the two-hour marathon was over. 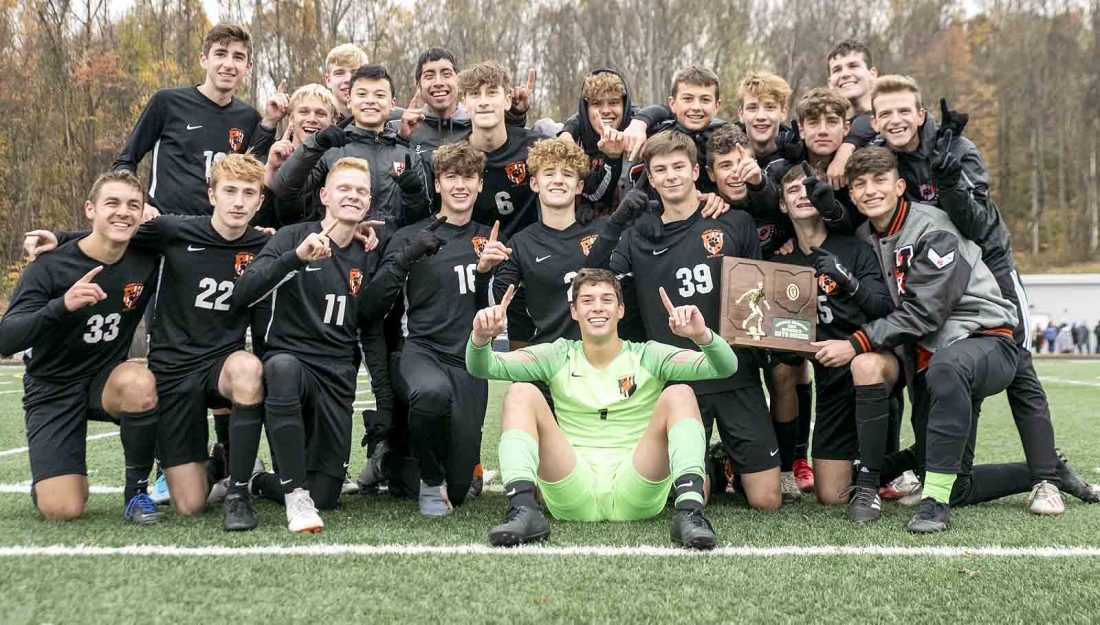 “That’s why we kept fighting,” Sperling said. “We understood we had to survive. We had so many chances in front of the net, we came up short. In the long run, we finished the game. Everyone buried their’s and our keeper had a pair of great saves. I just happened to be the last one to take it.”

Howland will either play Lexington or Lima Shawnee on November 6 at a site to be determined.

“I’ve never dreamed of anything like this,” Brill said. “My goal this year was to win District. We’re going above and beyond. When I say Final Four, it hits me that we are in the Final Four. It’s amazing.”

“These kids have definitely given us a season to remember,” Stiles said. “Hopefully, there is a little more to write for this book.”