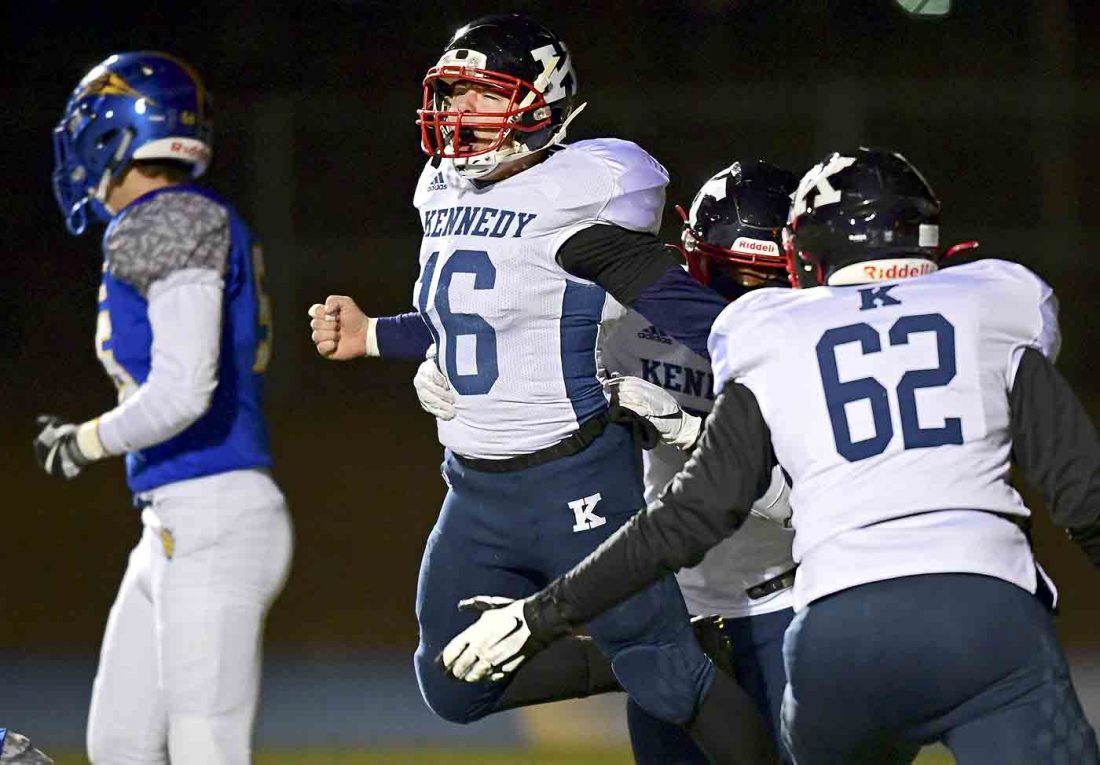 Blustering winds combined with bitterly cold conditions made for a miserable night to be throwing the ball around Independence High School’s Alumni Field.

Apparently no one told that to John F. Kennedy’s Christian Marantis.

The strong-armed senior threw for two first-half touchdown passes and was on point from start to finish as the Eagles slowly picked apart Independence, 41-7, in a Division VII, Region 25 first-round matchup.

“I just thought our quarterback played lights out tonight,” JFK coach Jeff Bayuk said of Marantis. “He made some throws tonight where I was just astounded. He really threw the ball well.” 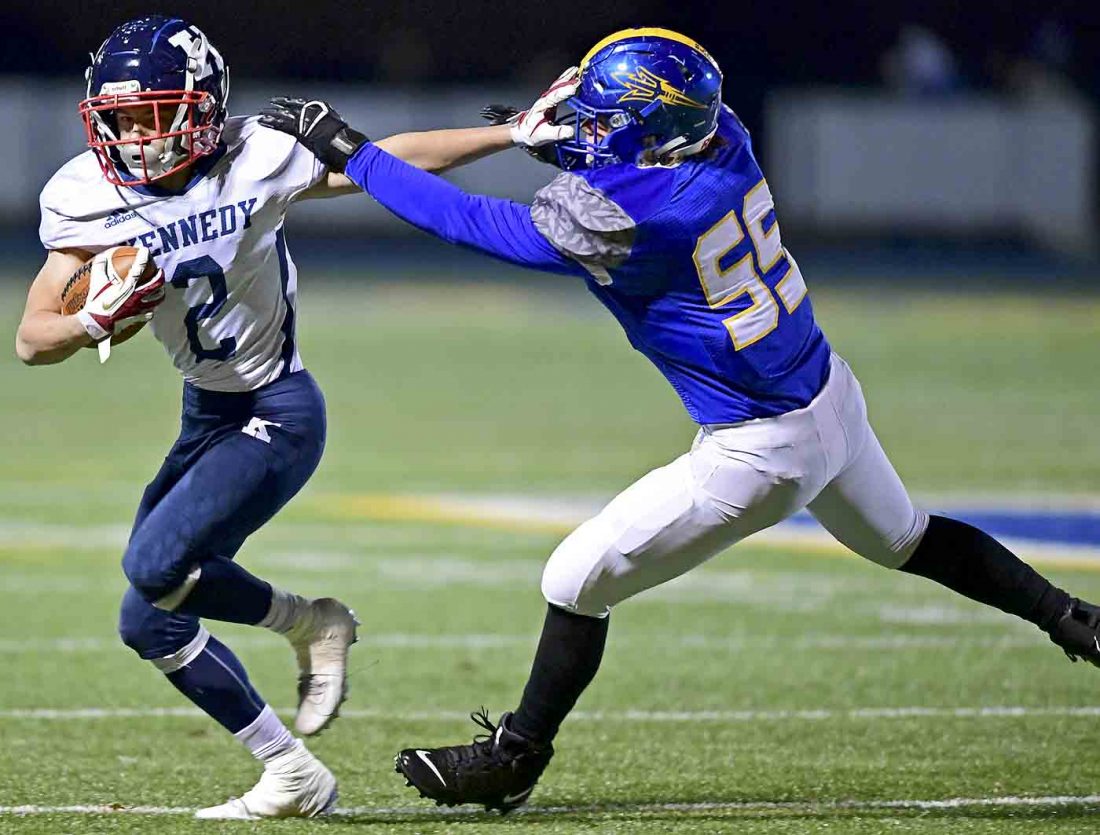 Marantis had plenty of help from his friends, too.

While he completed 9-of-14 passes for 152 yards, two TDs and zero interceptions, running back Jesse Likens ran for 163 yards and three TDs. Do-it-all receiver/running back/quarterback Cameron Hollobaugh added six receptions for 62 yards and one TD catch, and he also ran the ball (often as a “Wildcat” QB) for 35 yards and one TD on eight carries.

Then there was the defense, which held the Blue Devils (7-4) to 33 yards rushing on 20 carries. The Eagles (8-3) harassed Independence quarterback Michael Tommer most of the night and slowed down an offense that came in averaging 30 points per game.

“We did a good job of limiting what they could do,” Bayuk said. “They didn’t run the ball very well … And our pass rush was good with just our front four, so we knew they had to get (the ball) out of their hands quick, so then we could overplay things, lock up on receivers and do a little bit more of that stuff.”

Marantis and offense took care of the rest. 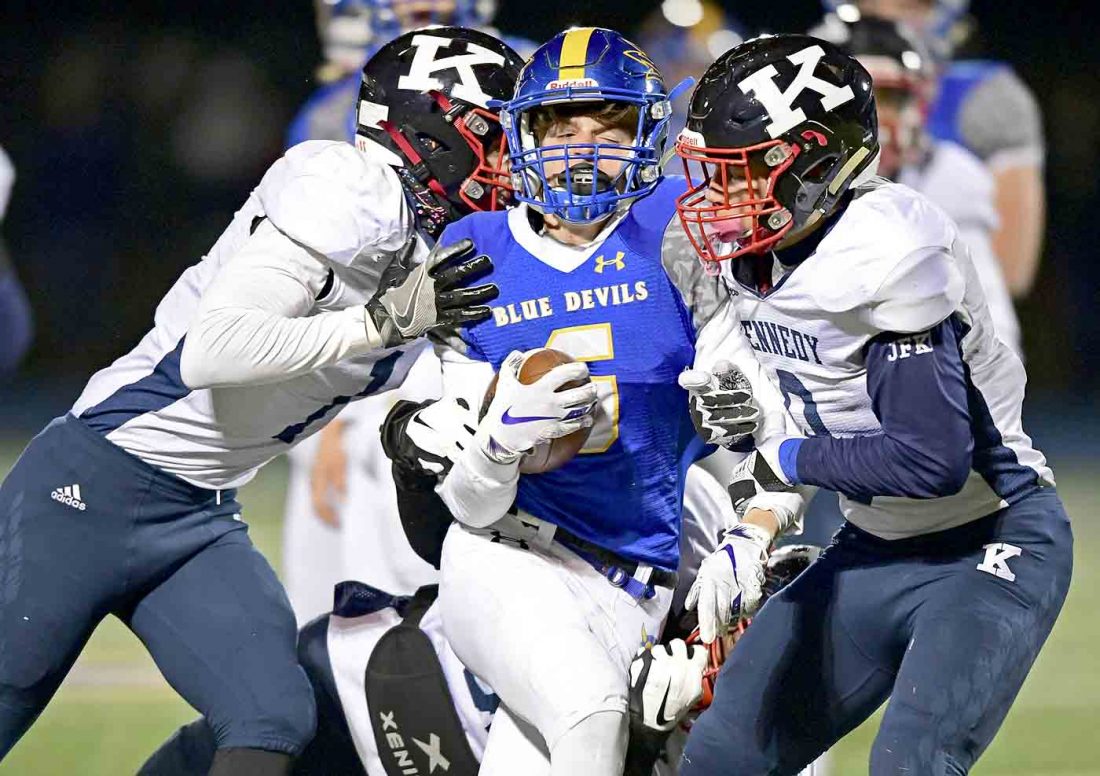 JFK started the game with great field position after forcing a three-and-out and taking over at the Blue Devils’ 34. Likens scored just four plays later on a 19-yard run. After a long drive by Independence didn’t result in any points, the Eagles responded with a long drive of their own. This time, Marantis capped it with a perfect pass to Gabe Green, who dove into the end zone for a 20-yard TD and a 14-0 lead.

The Blue Devils, who threw numerous different screen passes throughout the game, got one to work to perfection as Hommer slipped a throw to Kyle Zygmunt, who made a man miss and went 77 yards for a TD.

JFK took over from there. Marantis scrambled and launched a pinpoint pass on the run, but the ball was dropped in the end zone. He wasn’t fazed. On the next series, he fired another perfect pass on a slant route by Hollobaugh, who reached out and snagged the strike for a 13-yard TD late in the first half.

“I got used to it,” Marantis said of the conditions. “We’ve been building up all week to do this, so it kind of was just there. It all came together.”

It sure did, especially in the second half.

That’s when Likens started to get loose. He had touchdown runs of 5 and 59, the second one putting JFK up, 34-7, and essentially sealing the victory late in the third quarter. Hollobaugh added a 7-yard run for the final score of the night.

“We’re just thrilled with the way (Marantis) played tonight,” Bayuk said. “He ran the ball a couple times when we needed it, and Jesse Likens and Cam Hollobaugh, they’re two guys that people have to worry about, so we’re very pleased with the way our offense performed tonight.”

The Eagles may need an even better performance next week.

They host top-seeded Cuyahoga Heights (9-1), which has defeated JFK in the playoffs each of the last two seasons. The Redskins have won three straight regional titles (one in Division VI) and have been state runners-up twice in the past three years.

“We’re familiar with them,” said Bayuk, who led the Eagles to a state title in 2016. “We know all about them. They’re a great program. They have great athletes and great coaching. It’ll be a mountain to climb, but we’re here, so we might as well get the rope out and start climbing.”