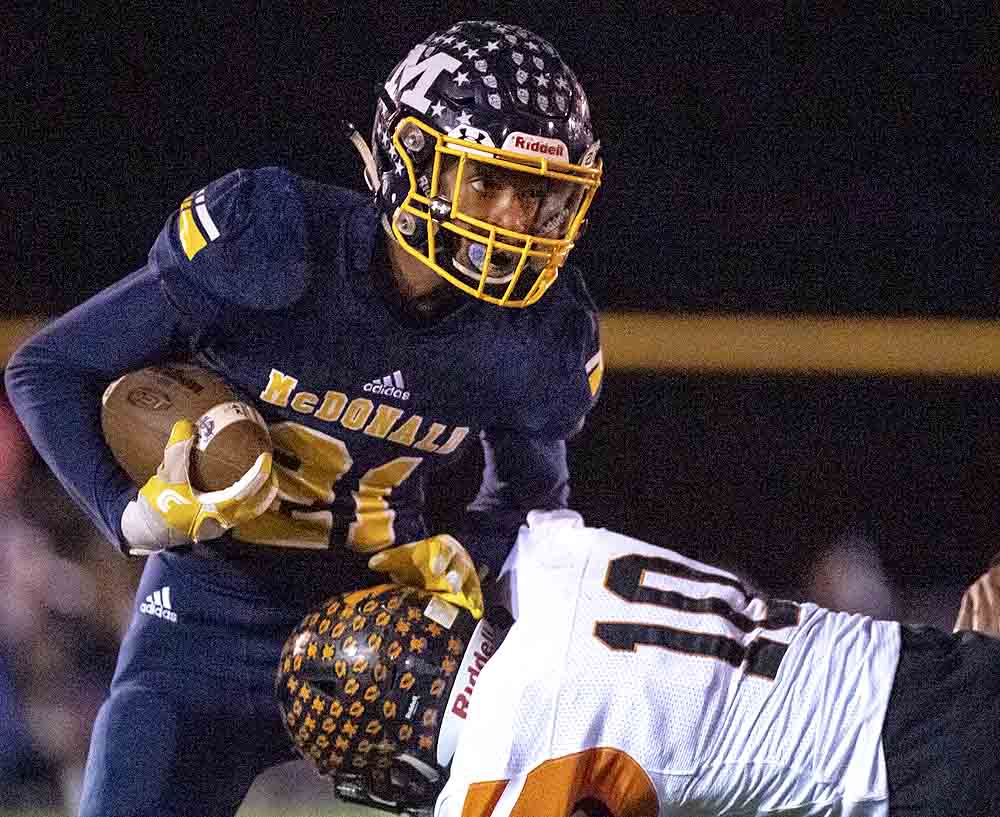 Correspondent photo / Dianna Oatridge McDonald’s Dominic Schadl, center, rushes for yardage with the Springfield defense in pursuit during their game in McDonald on Friday night.

McDONALD — The 2018 football season couldn’t have played out much better for the Springfield Tigers, with the exception of one little detail.

While a 9-1 record looked great on paper, there was no playoff berth awaiting at the end of the run.

This season, the Tigers set out to change that bit of misfortune. With a 38-21 win over the McDonald Blue Devils in a Mahoning Valley Athletic Conference game Friday, the Tigers secured a 10-0 regular season that resulted in a first-place finish in the Division VI, Region 21 computer standings.

“Our seniors were talking about it the whole offseason, being 9-1 and not making it,” Tigers coach Sean Guerriero said. “This region is tough. It’s an accomplishment to be on top of that right now. I give a lot of credit to our seniors. They’ve led these kids all offseason. It’s good to be able to see the kids achieve some of the goals they set for themselves.”

There was also a feeling of satisfaction on the Blue Devils’ sideline despite the loss. McDonald finished the regular season with a 6-4 record but is expected to earn a berth in the Division VII, Region 25 playoffs. 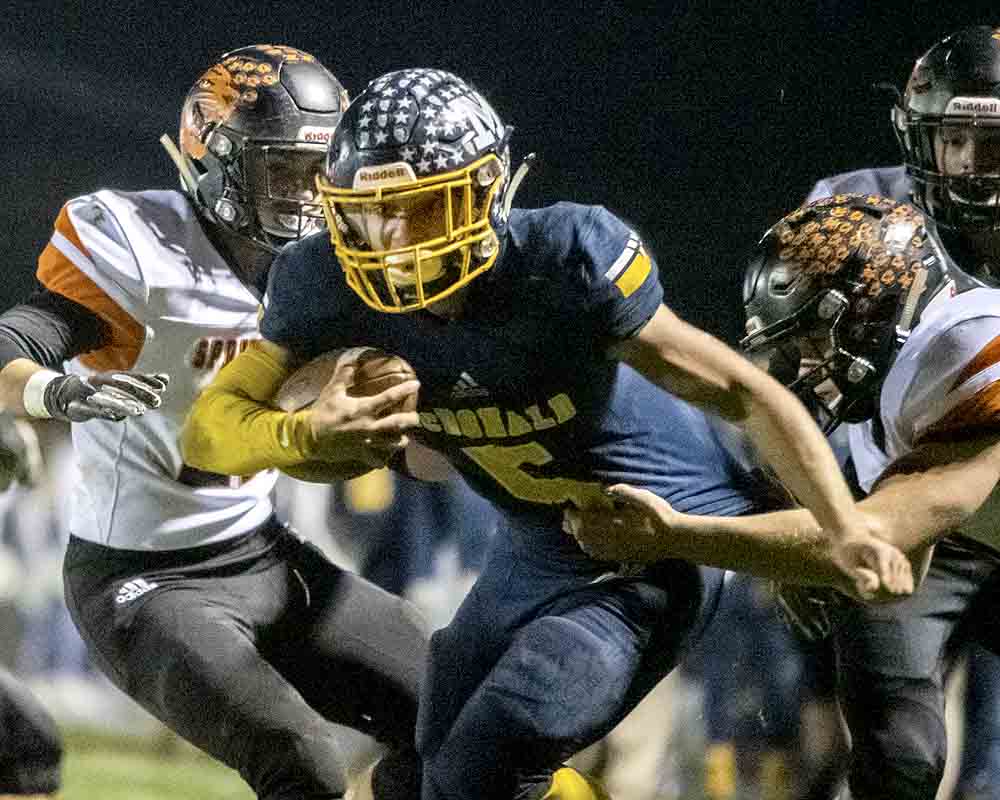 Correspondent photo / Dianna Oatridge McDonald’s Dominic Schadl, center, rushes for yardage with the Springfield defense in pursuit during their game in McDonald on Friday night.

It’s quite an accomplishment for a team that lost its first two games and three of the first five. Coach Dan Williams lost eight starters on each side of the ball from last season’s team that went undefeated in the regular season and finished 11-2.

“People didn’t think we’d be playing in Week 11, I’ll tell you that much,” Williams said.

The Tigers, who clinched the MVAC crown with a 7-0 record, took control with a 10-play, 68-yard drive on their first possession. Garrett Walker capped the drive with a 4-yard touchdown run, and Clayton Medvec’s extra-point kick put Springfield ahead for good at 7-0.

The Tigers went on to open a commanding 24-7 halftime lead. Guerriero was able to successfully utilize a balanced ground attack, mixing in some passes by talented sophomore quarterback Beau Brungard.

“When it gets cold like this you want to be able to run the ball,” Guerriero said. “Offensively and defensively we have to get them off the field. We definitely did a good job on both sides of the ball. At this point you want to limit your mistakes and try to get the kids running to the football defensively.”

A 14-yard scoring run by Austin Tindell extended the Tigers’ lead to 14-0. The Devils answered with a 12-play drive that resulted in a 24-yard touchdown pass from Dominic Schadl to Cameron Tucker. The point-after kick by Tanner Kilbourne cut the deficit to 14-7.

The Tigers took a 21-7 lead on a 2-yard scoring run by David Duvall and Medvec’s kick. Medvec added a 28-yard field goal on the final play of the first half.

Springfield used more than half of the time in the third quarter to march 50 yards on 11 plays to extend the lead to 31-7 on a 4-yard pass from Brungard to Evan Ohlin. The Devils made it 31-14 on a 7-yard scoring run by Tucker.

The speedy Walker turned the right corner on a 30-yard scoring run for the Tigers late in the final quarter. McDonald (5-2 in the MVAC) finished the scoring on a 38-yard run by backup quarterback Logan Hawk.

“That’s one good football team there,” Williams said of the Tigers. “That’s one of the best I’ve gone against in my 20-year career when I look across the board with their line and defense and their skilled kids.”