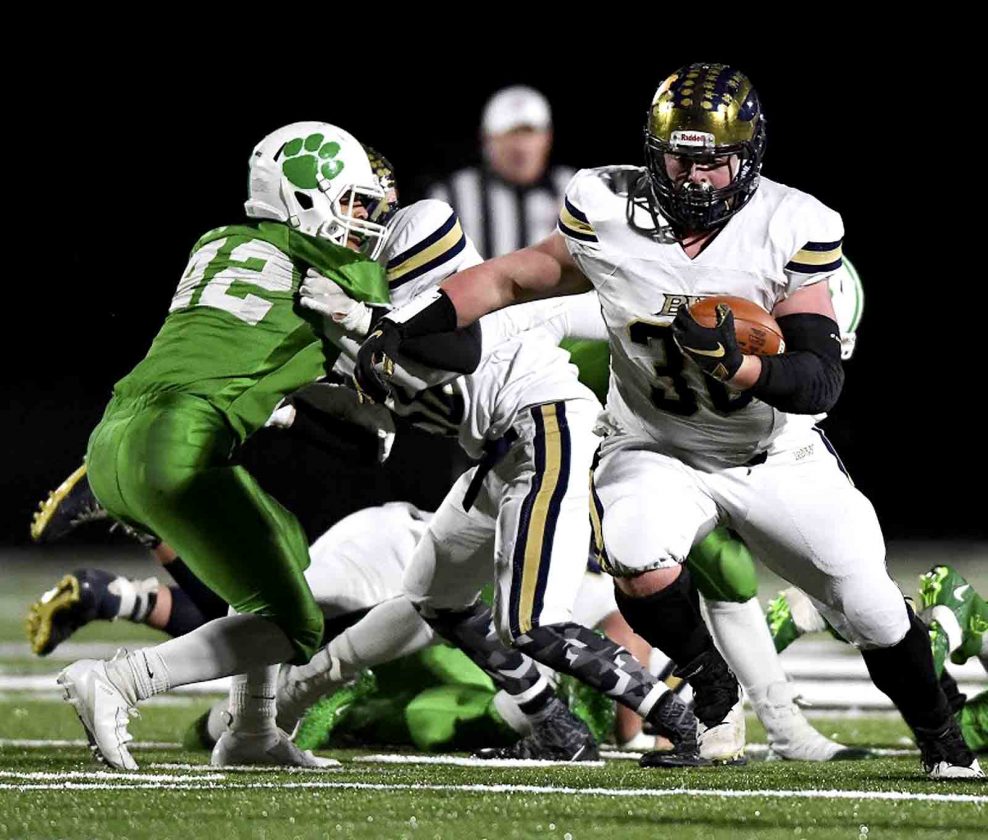 However, the seventh-seeded Warriors couldn’t sustain the offensive prowess in the second half and never were able to corral the second-seeded Wildcats, who used a three-touchdown second half to post a 49-28 win.

“They have a very good offense, and it’s tough to get the ball off them because they ball-control so well,” Brookfield coach Randy Clark said of Mogadore. “Our kids played their tails off, but couldn’t get a stop or turnover against a very well-coached and disciplined team. If you can’t get the ball from them, it’s hard to win. One offensive possession can put you behind the eight-ball.”

That’s exactly what happened for the Warriors, who finished 7-4.

With the scored tied at 28 at intermission, Mogadore took the second-half kickoff and drove 63 yards in nine plays, with 6-foot-4 receiver Nathan Stephenson hauling in a 9-yard pass from quarterback Will Popa in the left side of the end zone to take a 35-28 lead. 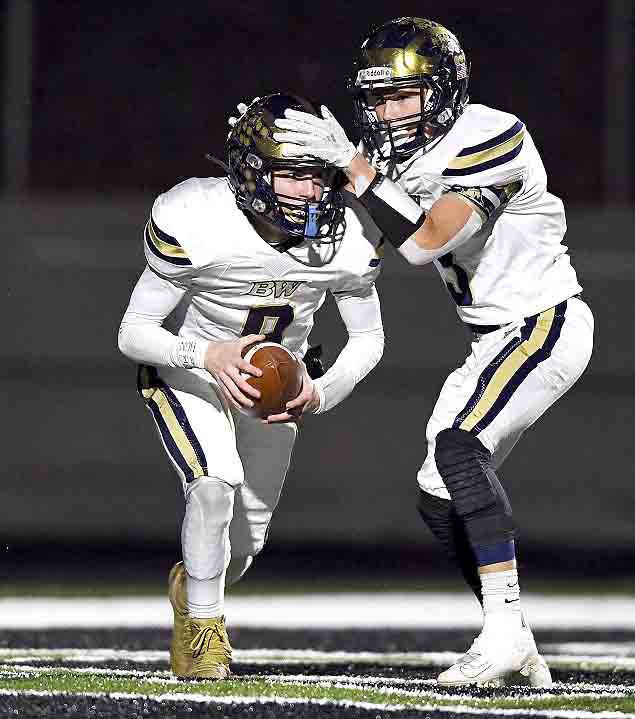 Brookfield had traversed 62 yards in six plays in only 34 seconds to score the tying points just 4 seconds before halftime. But quarterback Haden Gibson was injured in the drive and could not grip the ball well enough to throw it much in the second half.

“Scoring before halftime gave us a lot of momentum, but Haden hurt his throwing hand at the end of the half there when he hit it on the back of one of our guy’s helmet,” Clark said. “That’s why we couldn’t throw the ball much in the second half and that allowed (Mogadore) to just focus on stopping our run game. They were loading the box and we didn’t have our usual balance on offense because of the injury.”

On Brookfield’s first possession of the second half, it drove to the Mogadore 10-yard line before Tyler Briggs was stopped short on a fourth-and-2 run.

Mogadore then methodically marched 90 yards in 13 plays, eating 5:40 of game clock and taking a 42-28 lead with 9:10 left in the game. The Wildcats converted a fourth-and-2 play at the Brookfield 42 as Tyler Knight found a crease and darted 21 yards. Four plays later, Dylan Jones scored on a 2-yard run.

In desperation mode in its seventh playoff appearance, Brookfield tried a trick play on its next offensive snap, as Briggs took a pitch from Gibson and threw downfield. It was intercepted and set up Mogadore’s final touchdown when Nick Skye scampered down the home sideline 37 yards to paydirt with 8:09 remaining.

In Brookfield’s last possession, the Warriors drove 77 yards but fumbled on the Mogadore 5-yard line, and the Wildcats ran out the clock.

“There were a couple of turning points and that fourth-down stop was the biggest one,” Mogadore coach Matt Adorni said. “We knew they were a great offensive team. We didn’t stop them very often. We finally got some turnovers late, but we struggled to stop them.

“That Briggs kid is a load to handle. We also got a little luck there go our way when their quarterback was hurt late in the first half. That changed the game a little bit, but that’s part of this game.”

Briggs rushed 23 times for 201 yards and two touchdowns and completed a 28-yard pass to Gage Emery that helped set up the late first-half touchdown. Gibson ran 17 times for 130 yards and was 8-for-14 passing for 98 yards. He was just 2-for-3 for 22 yards in the second half.

Brookfield scored on four of its five first-half possessions. In the second half, the Warriors’ three possessions ended with downs, an interception and a fumble.

Mogadore scored on seven of its eight possessions. The Wildcats did not have a turnover and never punted. The only possession in which they didn’t score was the final one.

“I was a little worried it would end up like a Big-12 type of game, you know, 63-56 or something,” Adorni said. “Our line did a great job opening things up, and I think we had several big plays on third and fourth downs.”

Skye ran 23 times for 170 yards for Mogadore, which improved to 10-1 and will play Beverly Fort Frye (11-0) in a regional semifinal next Friday. Knight added 79 yards and Jones had 47 yards on three attempts. Popa was 6-for-8 passing for 104 yards and Stephenson had four catches for 71 yards.

“We had trouble covering that out route to their big receiver,” Clark said. “But I couldn’t be prouder of our kids. They fought and clawed all year and worked their tails off. I’m so proud of all 34 kids.”