Back to the postseason 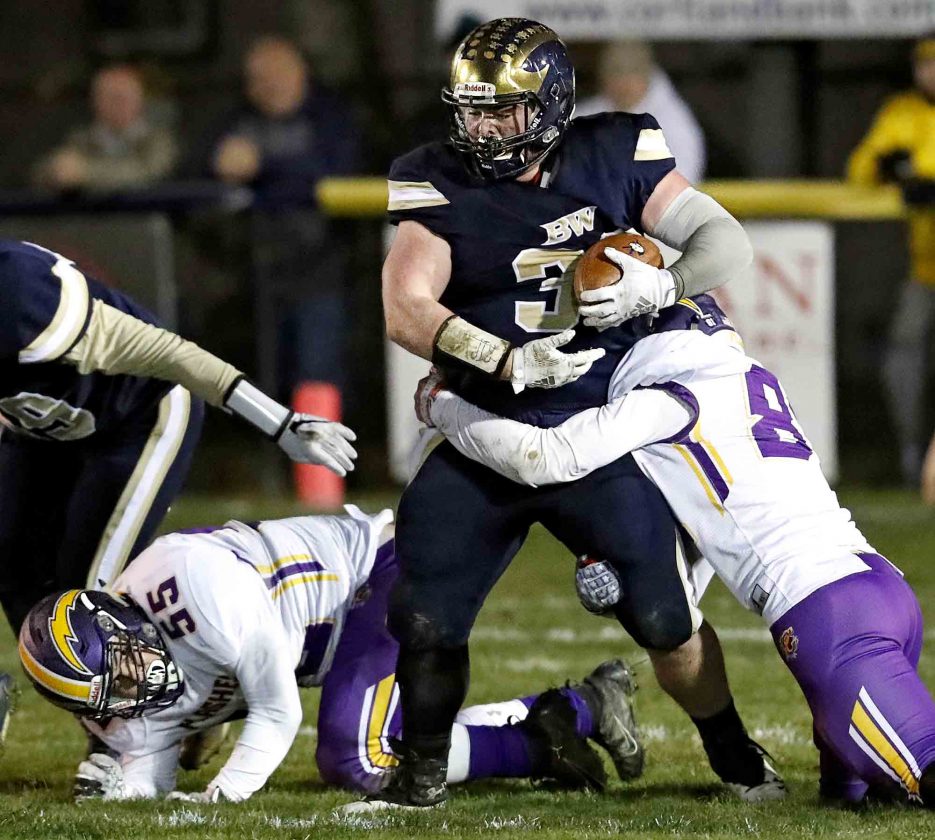 The seniors on the Brookfield High School football roster began thinking about the playoffs a long time ago.

As impressionable middle-school students, they were paying attention to the successes of the high school gridders.

On Saturday, they will be making memories of their own and giving young males within the community some fuel for thought and future aspirations as they will play at Mogadore in the first round of the Division VI, Region 21 playoffs.

“This has been a goal of ours since middle school and we’ve been working hard to make it happen,” said senior outside linebacker Connor Filipovich. “We’ve been going after this for a long time now.”

“Everyone has been looking at our class and thinking by the time we were juniors or seniors, we were going to make something happen,” said senior quarterback Hayden Gibson.

The Warriors will be making their seventh playoff appearance. This is their first since consecutive postseason berths in 2011-15.

“This group has never been to the playoffs, so this is very big to them,” said coach Randy Clark, who is in his 15th season. “As coaches, we’ve been here several times. It’s our job to keep (the players) grounded and let them know what to expect.

“But, you know, we treated last week like it was a playoff week because we needed to win to get in. The kids responded well and I’m sure they will respond well this week.”

The Warriors are coming off a 33-0 home win over Champion that clinched a playoff spot and the All-American Conference, Blue Tier championship. They are 8-2 overall seeded seventh. Mogadore, which is 9-1 and seeded second, will be making its 33rd appearance. The last time the Wildcats did not qualify for the postseason was 1998.

“Mogadore is a good football team and have been in the playoffs 30-some times,” Filipovich said. “So they’re one of the blue-bloods of Ohio High School football. They like to run the ball. They’re about 70-percent run. They have a big tight end and they have pretty good size on the line. Their running backs are pretty quick and they have a good fullback. We just need to go out and play our game and get a win.”

“Early in the season, everyone was talking about our big running back, Tyler Briggs, and our quarterback, Hayden Gibson and giving them a lot of credit for our success,” Clark said. “They’ve been great, but I was telling anyone who would listen that our defense was going to be very good at the right time. Our defense runs well; our defense hits well. We’ve got a lot of athletes on that side of the ball and they love to make contact.”

Brookfield is allowing 17.8 points per game, but just 12.6 in the last eight weeks. The Warriors’ defense struggled early in a 35-28 win over McDonald in the opener and a 49-28 loss to Springfield in the second week.

“Our defense started out slow, but we’ve come a long way and we’ve played very well, especially in the past few weeks,” said Filipovich, who leads the defense with nine tackles for loss and five sacks. “Shutting out Champion, who was 7-2, shows what we can do. That was big for us.”

Patrick Reardon, another outside linebacker, leads Brookfield with 8.1 tackles per game, followed by middle linebacker Matt Burns at 6.9 per contest. The Warriors have posted two shutouts. Their other loss was to Columbiana 24-23 on Oct. 11.

Mogadore hasn’t posted a shutout and is allowing 18.1 points per game, while Brookfield is scoring 40.4 points per outing.

“We feel our offense can move the ball on the ground or through the air and having balance makes us tougher to defend,” Gibson said. “I trust our linemen a lot. They’re doing their job on run plays and pass blocking. Ethan McWilliams has been solid for three years up front and Pat Reardon is very strong, too.

“Last week was great. Everything came together in one game and it was our final home game. It was a great finish to the regular season, but we’re not done yet. We’re happy to be in the playoffs, but we have a lot left to do the way we’re thinking right now. (Mogadore’s defense has) good size, and their middle linebackers fly around and have good speed, so we have to have a great week of practice and stay focused like we have all season. We’ve had great practices all season and I think that’s been the difference this year.”

The Warriors are thankful to Liberty, which has offered its turf field to the Warriors for playoff preparation.

“We’re fortunate that Liberty is being good to us and allowing us to use their field,” Clark said. “That’s special, since our field is basically just mud. We can get a lot more accomplished here on the turf than we can in the mud. Plus, we’ll be playing on Mogadore’s turf and we’ve only played once on turf all year.The turf should allow us to take advantage of our speed and quickness. We play fast and that shows up more on turf.

“I watched film on (Mogadore) for between 24 and 40 hours over the weekend. They will try to pound you and then jump to a spread. They use three or four running backs and their quarterback throws a nice ball. They’re very well-coached and, defensively, they run to the ball. We’re excited to play them. I think we’ll be ready.”