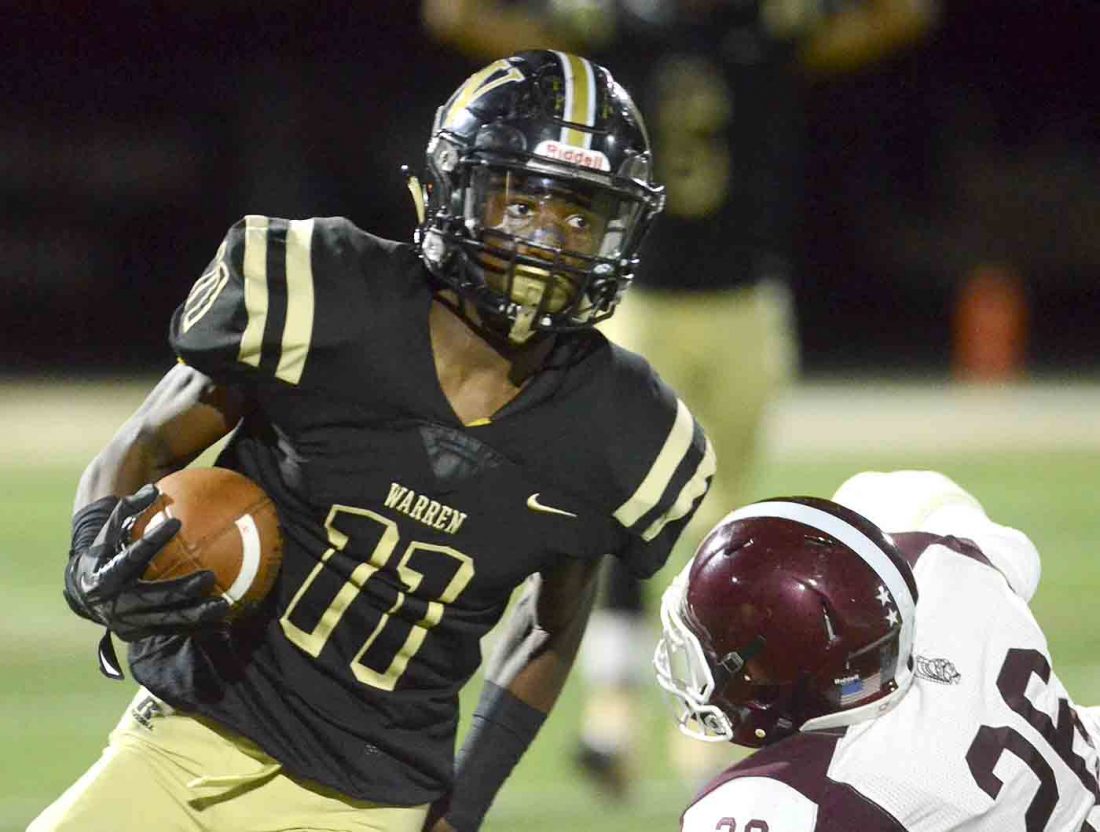 WARREN — It was a big game that featured an even bigger comeback. It took two overtime periods to decide the outcome of the Harding-Boardman clash at Mollenkopf Stadium Friday night. The Raiders let a 21-point fourth-quarter lead slip away, but managed to come away with a 44-38 victory.

The Spartans nearly pulled off the huge rally after three fourth-quarter touchdowns. Harding entered the fourth with a 35-14 lead before the comeback unfolded.

On third-and-13, Boardman senior quarterback Zach Ryan scrambled and threw a wild pass that was nearly picked off. The Spartans were forced to try a field goal but the Raiders were offside.

After the penalty, Spartan coach Joe Ignazio decided to go for it. Ryan hit junior tight end Ty Ventresco for an 8 yard touchdown and it was 35-21.

After a Harding punt, Ryan had a quick strike TD pass of 34 yards to junior receiver Cam Thompson. Boardman was now within a touchdown at 35-28. 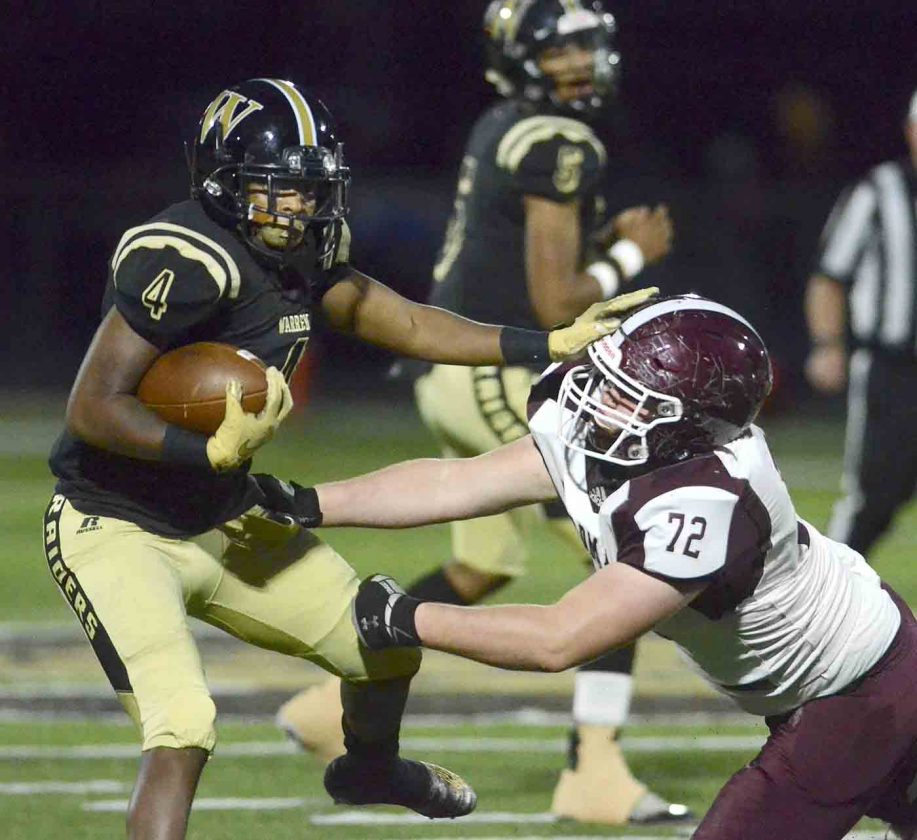 The Raiders got the ball and, on third-and-3, a handoff up the middle didn’t pick up the first down. On fourth-and-1, Harding coach Steve Arnold decided to put the game in the hands of his defense and punted the ball to Boardman.

It was a good move by Arnold as senior linebacker Jasier Graham had a big sack for a 12-yard loss. Graham helped up Ryan after the play. The Spartans were forced to punt and senior Connor Miller got off a huge boot down to the 10 yard line.

That change of field position led to Boardman knotting up the score. Boardman forced a Raider punt and got the ball on the Harding 36-yard-line. The Harding defense almost saved the game but Ryan had a trick up his sleeve.

On fourth-and-10, Ryan picked up a first down on a QB keeper. With 31 seconds remaining in regulation, sophomore running back Sean O’Horo pounded it in from 1 yard out to tie the game at 35.

Harding got the ball first in overtime and each team scored a field goal in the first session. Boardman got the ball to begin the second overtime. 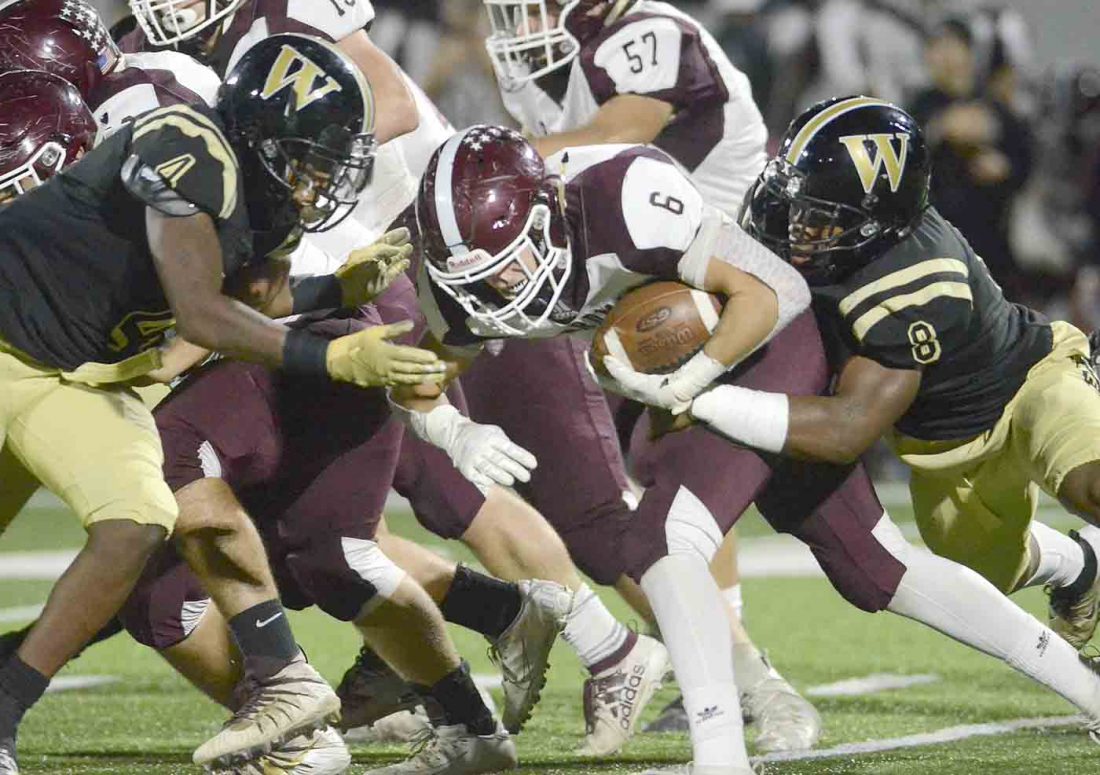 Raider senior Jarriel White delivered a crucial sack pushing the Spartans back to a fourth-and-21. Boardman was unable to pick up the yardage and Harding got the ball.

Harding senior Marcus Brown’s strong running let the Raiders escape with the victory after his game winning 3-yard touchdown run to close it out.

Boardman struck first to begin the game and led 7-0 after Ryan’s 45-yard TD pass. The Raiders bounced back and scored on the ground and through the air to take a 14-7 lead into the second quarter.

Junior Elizah Smith gave Harding a 21-7 lead after his 38 yard touchdown run down the right sideline. Ryan hit senior Tyler Peterson on a big pass play but he was intercepted on his next attempt. Senior Jamel Anderson made a beautiful play on the ball to grab it in the end zone for the Raiders.

Senior Ty Artis displayed an artistic style of play as he made nifty moves on a touchdown drive. His 3-yard TD tun with 47 seconds left until halftime put the Raiders up 28-7.