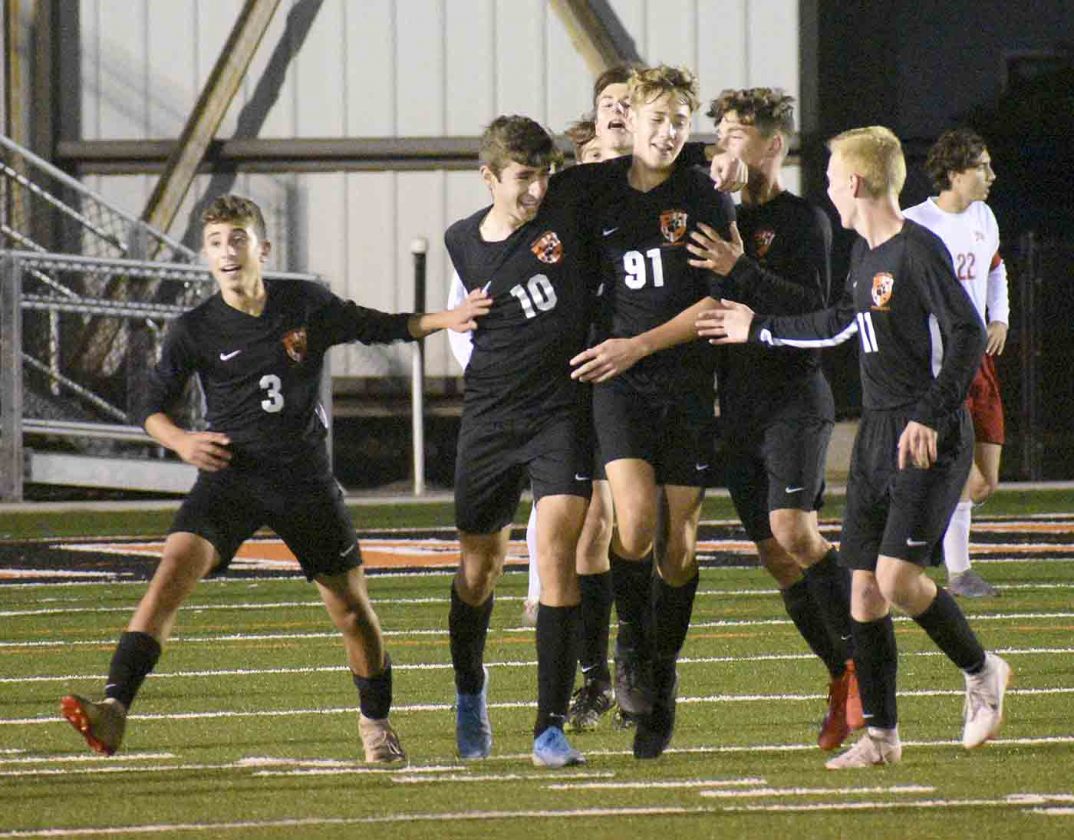 Staff photo / Brian Yauger The Howland Tigers celebrate after midfielder Pano Gentis’ goal in the first half of their 1-0 victory over Canfield on Tuesday night.

HOWLAND — Howland completed its undefeated season with a 1-0 win over Canfield, the team that kept them from a perfect 16-0-0 season.

“We always know Canfield is going to bring one heck of a game to us, and they did it again tonight,” Tigers coach Brian Stiles said. “They have a heck of a team over there.”

The Tigers last went undefeated in 2010 on their way to a district title.

Even though they went undefeated this season, Stiles knows the challenges aren’t over yet. Everyone starts fresh in the tournament and anything can happen.

“It (going undefeated) means that we met 16 challenges, and won 15 out of 16 which is good,” Stiles said. “We’re going to get back to work tomorrow and realize that everyone starts 0-0 with the playoffs coming up.”

Howland went into the game with the league title locked up, but that didn’t change their intensity. They wanted to come out and beat the team that held them to a 0-0 draw earlier in the season.

“It felt sweet,” Tigers midfielder Pano Gentis said. “We got a good win. We didn’t play our best, but we got the job done and that’s all that really matters.”

A little more than 10 minutes in the game, Gentis got them on the board with the only goal of the night. Gentis embraced the baseball mentality, kept his eye on the ball and it worked in his favor.

“I saw the ball, and I went into it,” Gentis said. “Thankfully it ended up in the back of the net.”

Despite the loss, Canfield coach Christian Silvestri is proud of his team’s performance and knows that this loss didn’t discourage them.

“There’s definitely things we could work out,” Silvestri said. “We didn’t get many opportunities and when we did, we didn’t hit the ball right and stuff like that. The boys are happy even after a loss. They know Howland is a state-ranked team, so to hold them to a tie, then a 1-0 game speaks volumes about my team.”

The Tigers head into the tournament as the top seed in the Division II Niles District facing the winner of West Branch and Niles. Canfield opens the tournament with Girard and is hoping they have a round three with Howland.

“Hopefully we get these guys again in the finals,’ Silvestri said. “It’ll be a great game.”

Something to be excited about for Howland fans is the fact that the Tigers will be able to play their true starting 11 during the tournament. Howland has had bad luck with injuries and has only run its best lineup a handful of times during the year.

“We’ve had so many injuries this year that we really haven’t had a chance to get our starting 11 on the field,” Stiles said. “I think they’ve only played together three times out of 16. I think this next week and a half will be a good opportunity to try and get everybody back and start getting some rhythm as well.”

Overcoming the injury bug and still coming out undefeated means a lot to the Tigers, who feel like they still have more to accomplish.

“I feel that we’ve gone through a lot of adversity this season,” Gentis said. “We just proved that we’re one of the best teams in the area and we have a chance to do big things this year, so hopefully we can do that.”