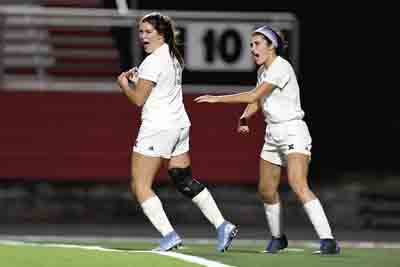 Correspondent / Robert Hayes John F. Kennedy’s Caitlyn Condoleon, left, and Alissa Scattino, right, celebrate after Condoleon scores her second goal in the first half. She ended the match with all four of the Eagles' goals in a 4-2 victory over Ursuline.

Correspondent / Robert Hayes John F. Kennedy’s Caitlyn Condoleon, left, and Alissa Scattino, right, celebrate after Condoleon scores her second goal in the first half. She ended the match with all four of the Eagles’ goals in a 4-2 victory over Ursuline.

Correspondent / Robert Hayes Liana Pagano of John F. Kennedy looks to try and control the ball during the first half of her team’s 4-2 win over Ursuline at Campbell Memorial Stadium on Monday.

CAMPBELL — The third time was the lucky charm for John. F Kennedy against the Ursuline Irish.

Ursuline got the best of the Eagles twice in the regular season, but JFK found its revenge Monday in a Niles District Division III girls soccer semifinal at Campbell Memorial High School, 4-2.

JFK’s Caitlyn Condoleon came through with all of the team’s goals. 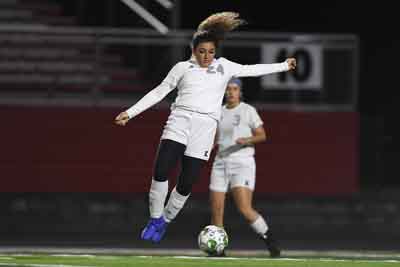 Correspondent / Robert Hayes Liana Pagano of John F. Kennedy looks to try and control the ball during the first half of her team's 4-2 win over Ursuline at Campbell Memorial Stadium on Monday.

“It’s kind of a lucky thing, but you’re kinda annoyed because then we kinda found all their secrets and tricks and stuff. We know that Taylor (Tomlinson) is a huge freaking brute force for them, so we kind of had a floater kinda stay with her –kind of get in her head a little bit, kind of break her down. I mean their defensive line too is pretty strong, so we just focused on where maybe some of the faster kids weren’t. We kinda capitalized on that. It was actually better playing them three times because we were definitely prepared.”

Condoleon felt it was a team effort.

“Honestly this was a game we’ve been preparing for as a team,” she said. “Ursuline was our rival this year. We played them twice before. We came up short both those times, so tonight was big for us. Big win for us.

“We worked very hard to get that win, especially in team effort, communication. Just working on ball movement in general. We believe in ourselves, and we executed greatly.”

She found the net twice in the first half, then a third time in the opening minutes of second half. After being injured on a slide tackle that yielded a yellow card for Ursuline, Condoleon needed help walking off the field and looked like her evening might be over.

After being sidelined for a part of the second half, she came back in to score her fourth goal with 15:01 left in the match.

Condoleon was excited to score coming off the injury.

“Honestly, it felt really good,” she said. “Usually if I get hurt, I step back a foot. I kinda take my time, pass to my teammates, try to get them an opportunity and stuff like that. It felt really good knocking in that fourth goal, especially in this kind of game.”

“When she got hurt, I was more upset because she’s also a basketball player and she’s a senior this year,” Zoccole said. “I would have hated for her to go out like that, but she has recurring knee problems. I went out and I saw her. I know she wasn’t going to sit on the bench for long.

“I let her sit and rest it up, but I knew she was going to come in and make something happen. She always does. I ask her for a goal and she gives me four.”

The Fighting Irish (10-7) didn’t go down without a fight. Freshman Maria Fusillo would score twice in the second half they started chipping into the Eagles lead.

Ursuline coach Roy Schmidt knows the difficulty of beating a team for a third time.

“This season was a great season,” he said. “I’ll tell you this, it’s hard to beat a team three times. We had them twice in the regular season and we beat them. They just played excellent tonight.”

Schmidt is also appreciative of what his two seniors have done for his program — Tomlinson and Lucia Rohrbaugh.

“They’re going to be horribly missed,” Schmidt said. “It’s been a pleasure to have both for four years. It’s going to be tough to see them go.”

Condoleon is ready to play for a district title.

“We fell short in the district final last year, so we are here to put it all together to win,” she said. “We’re going to practice like we’ve never practiced before and put our season on the line again. (We’re going to) play and execute and play to the best of our potential and believe in ourselves. I’m proud of us. I believe in us.”