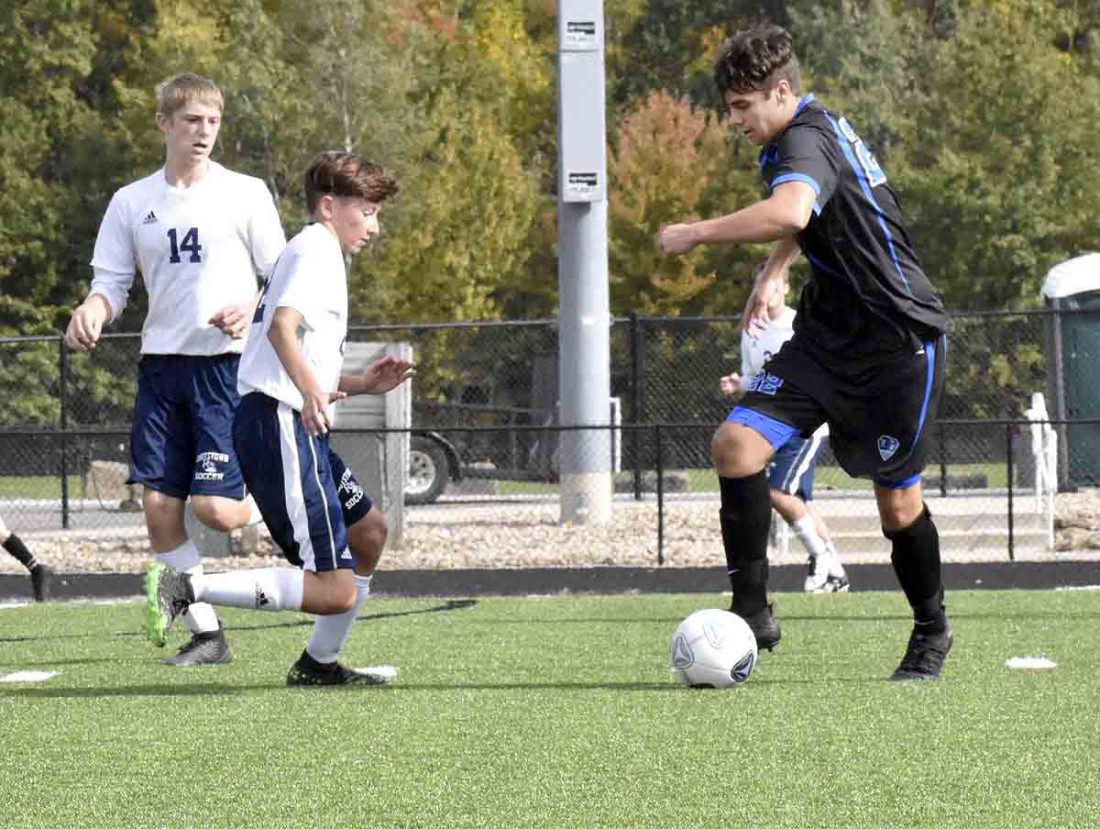 Staff photo / Brad Emerine Lakeview’s Blake Stockton dribbles past Rootstown defenders in the second half of the Bulldogs’ 6-3 home win in a Division II sectional final.

CORTLAND — After getting a little wake-up call, members of the Lakeview High School boys soccer team made sure they weren’t going to be late for the dance.

With homecoming festivities later Saturday night, the Bulldogs broke a 1-all tie with five consecutive goals in the second half en route to a 6-3 victory over sixth-seeded Rootstown in a Division II sectional final.

The third-seeded Bulldogs also didn’t want to be knocked out of their postseason dance, and the second-half flurry pushed them into a district semifinal Tuesday at second-seeded Poland.

“We started too slow in the second half and (Rootstown) made us pay with a goal in the first 30 seconds,” said forward Jason Busefink, who had a pair of goals and an assist. “It got our attention, and we got (the goal) right back and that really energized us.”

Lakeview, which improved to 11-6, dominated possession in the first half but led just 1-0 thanks to Busefink’s penalty kick conversion.

After Lakeview made the Rovers fetch the entire first half, Rootstown attacked much of the second half, especially after Drake Duncan had tied the score at 39:33.

Busefink’s vision set up an easy assist to Thomas Spencer at 37:05 as Lakeview regained the lead and began to pull away. Dylan Sarko’s header off a corner made it 3-1 at 32:38, and Busefink’s second goal at 26:23 pushed the lead to 4-1.

“We came out a little flat because we had dominated possession in the first half, and they got the early one to tie it, and that forced us to refocus,” Lakeview coach Scott Smith said. “I was happy with our initial response, but not pleased with the way we played late.”

That’s because after Nick Dorma scored at 21:45, and Brier Roper found back of the nets at 11:51, the Bulldogs got a bit greedy in their counters.

Rootstown, which finished 12-5-1, got a goal from Michael Farcash at 11:02, and an excellent individual play by Evon Martinez made it 6-3 with 6:11 remaining.

“It’s our mindset to keep scoring,” Busefink said. “Everybody on this team can score, and everybody wants to score. Who wouldn’t? It’s the best feeling in the world. But with everyone hungry and wanting to get into the act, that leaves some openings defensively and that allowed (Rootstown) to tack on a few at the end.”

Smith said it’s tough to ask his players to sit back and play defense with a lead.

“It’s hard for us because that’s not our style,” he said. “We’re used to countering, attacking and maintaining our aggressiveness. But that does tend to leave us vulnerable at times. Honestly, though, we don’t play well when we do sit back because we’re just not used to that style of play.”

That’s the same style that Smith and the Bulldogs expect to face at Poland.

“They like to dominate possession like we do,” he said. “They also do well in counters, so it’s two teams with the same approach and the same goal, to reach the district final.”