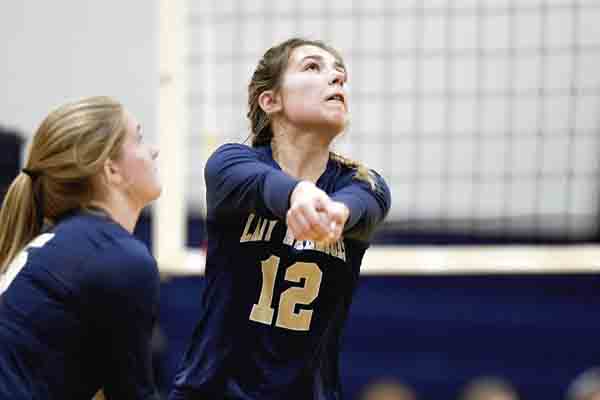 BROOKFIELD — The volleyball season is slowly winding down, and preparation for postseason play is in full swing.

Monday night’s match between the Brookfield Warriors and Springfield Tigers pitted the two teams against each other in a non-conference matchup, as both schools were looking to make tweaks before tournament play begins later in the month.

“We’ve been plagued with injuries all season off and on, so as soon as we get one girl back, we seem to lose another,” Jones said. “We got Jennie Stitzel back tonight, her sister (Carly Stitzel) is kind of out, so it was good to come in here with her back as a senior, providing some leadership, and helping (Lauren Ranelli) and (Lyndsey Smith) out on the floor, and it was nice.”

“To come out, ready to go, that I think was our biggest thing,” she said. “Those last two games, every game we got better. It’s just we had to wake up.

“So, I think that’s the number-one thing we have to take away from this, is come out expecting a good team.”

Hiner said seeing some non-conference teams late in the season is a positive.

“I think that helps us because since it’s so late, that means it’s close to tournament season, and that gets us ready for whatever team we end up seeing during tournaments,” she said.

Stitzel wants to work hard going into the postseason.

“I am definitely going to work on my passing because I’ve been out for so long,” she said, “but other than that, just hitting the open spots, especially for some of the tournaments plays. They’re very good at defense.”

“I think myself personally, I just want to try to keep my sets where everyone wants them, and as a team, I think we just need to keep up the communication,” she said.

The return of Stitzel was big for the Tigers.

She posted six kills and three aces and was excited to be back on the court,

“(It felt) very good, it was good to see everyone work together,” Stitzel said. “Just being with my team again really excites me, especially my senior year. We only have a couple games left, and being with my senior friends, it was very fun.”

Ranelli, another senior for Springfield (14-3), knows that having Stitzel back is huge.

“I think our communication helped us, and obviously it was fun to have one of our senior leaders (Stitzel) back,” she said. “She’s a positive asset to our team, and it’s great to have her back.”

Jones felt that teamwork was key to victory Monday night.

“These girls have played together for a while, and I have three great leaders in my seniors,” she said. “Just seeing them pull together and keep these young girls excited about volleyball and working hard.”