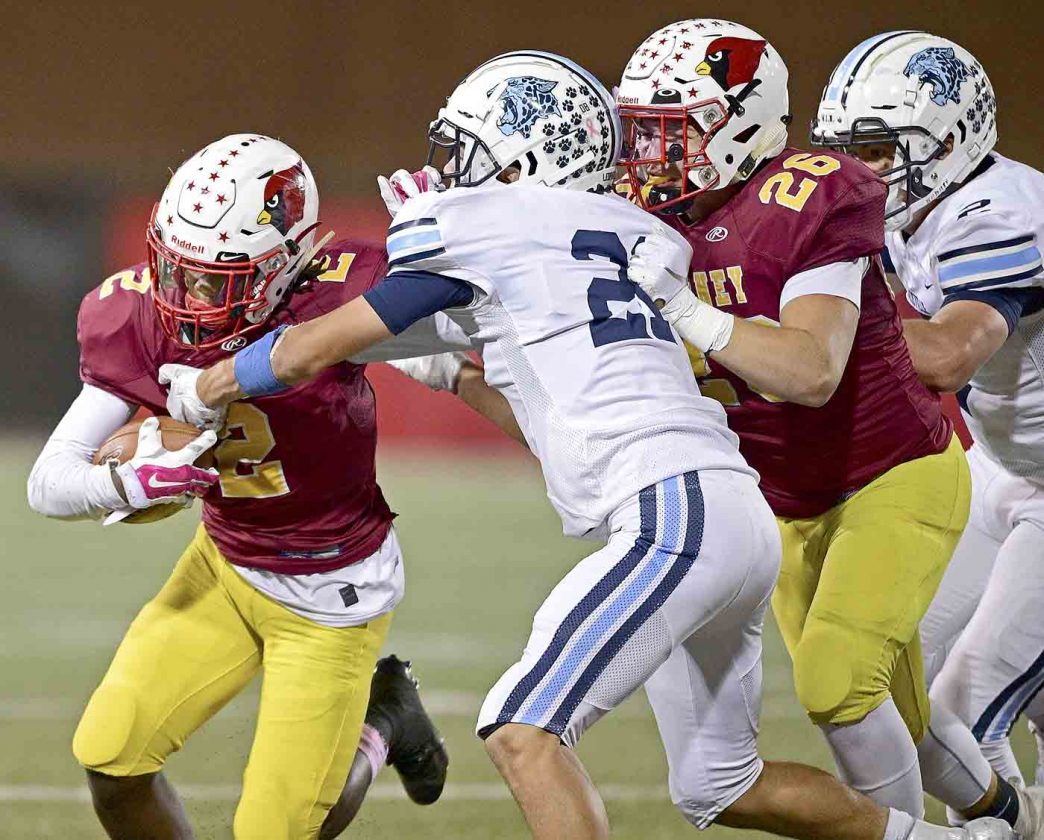 Correspondent photo / David Dermer Mooney’s Michael Santisi runs through Louisville’s Hunter Selander during the first half of their game Friday nigh at Stambaugh Stadium.

YOUNGSTOWN — A valiant effort from Cardinal Mooney fell short as the banged-up Cardinals dropped a 20-14 loss to Louisville in two overtimes Friday night at Stambaugh Stadium.

It was a difficult loss for Mooney, as it failed to score four times in the red zone, including both overtime possessions.

“They all hurt, but in this one we failed to take advantage of several opportunities there,” Mooney coach P.J. Fecko said. “But as far as the computer points, every loss hurts the same, whether it’s the first week or this week.

“We were in a tough spot and I thought our quarterback (Walter Sweeney) did a pretty good job considering the situation. He was a receiver until Monday. He’s our fourth quarterback because of injuries.”

Mooney, which fell to 4-3, was ranked sixth in the Division IV, Region 13 computer standings entering the weekends. 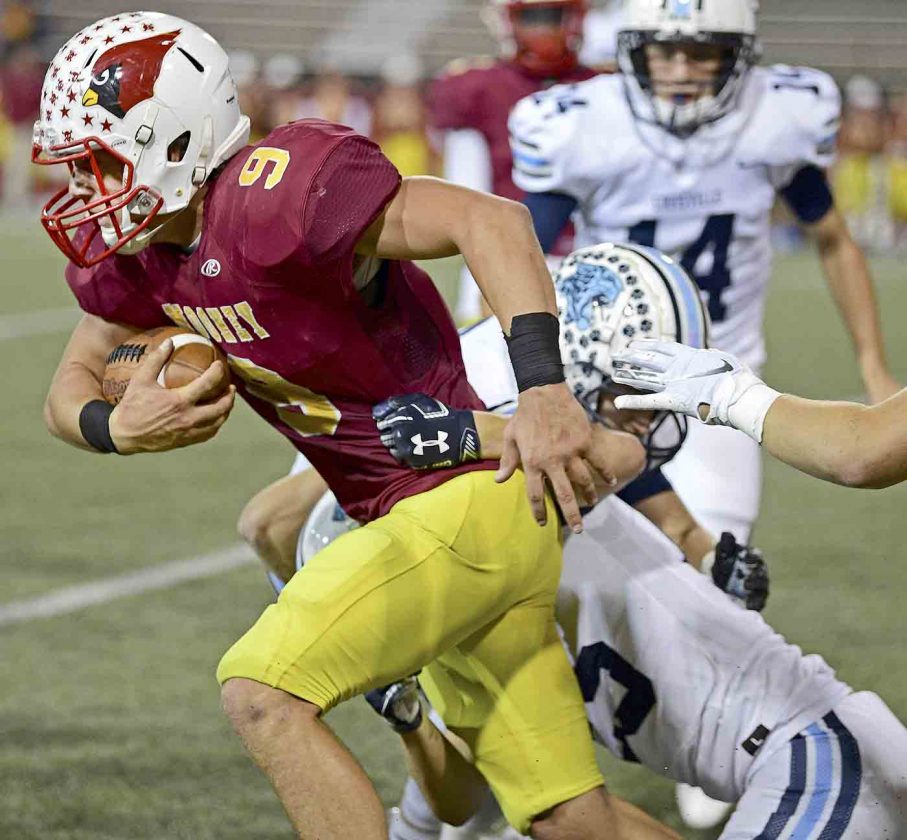 Correspondent photo / David Dermer Mooney's Michael Santisi runs through Louisville's Hunter Selander during the first half of their game Friday nigh at Stambaugh Stadium.

The score was 14-all entering overtime and the Cardinals went on defense first and stopped Louisville on four downs. They were aided by a pair of high shotgun snaps over the head of quarterback Colton Jones.

With all the momentum, Mooney ran the ball three times for two yards and Brian Philibin came on to attempt a game-winning 35-yard field goal. But the ball bounced off the right upright and the teams headed for a second overtime. It was Philibin’s third miss of the game, as earlier attempts from 29 and 26 yards failed.

In the second extra session, the Cardinals had the ball first and reached the Louisville 4-yard line, with the aid of a 12-yard pass from Sweeney to Devon Jenkins. But two QB sneaks left the ball at the 1 on third down and Sweeney fumbled on the next play trying to push the ball across the goal line.

The Leopards needed three rushes to place the ball at Mooney’s 7, where it faced second-and-goal. Davis Burick bulled in on the next play for his third touchdown of the contest. His first two scores were pass receptions from Jones, who threw for 238 yards.

Zy’ere Jones was magnificent in the loss. The Mooney running back ran 40 times for 216 yards and two touchdowns.

“He was terrific and he’ll probably sleep easier than the rest of us tonight,” Fecko said. “I thought our defense also played well against a tough passing team and our offensive line did a nice job stepping up.”

The Leopards led 7-0 at halftime as Jones threw a 27-yard touchdown pass to Burick on a fourth-and-11 play. Louisville lined up and quickly snapped the ball before Mooney seemed set and Burick run a simple seam route and was wide open.

Mooney tied it with Rogers’ 3-yard run, but Louisville responded quickly with a 61-yard touchdown pass from Jones to Burick.

Mooney tied it at 14 with three seconds left in the third quarter on Rogers’ 23-yard gallop up the middle of the field, before a scoreless fourth quarter.