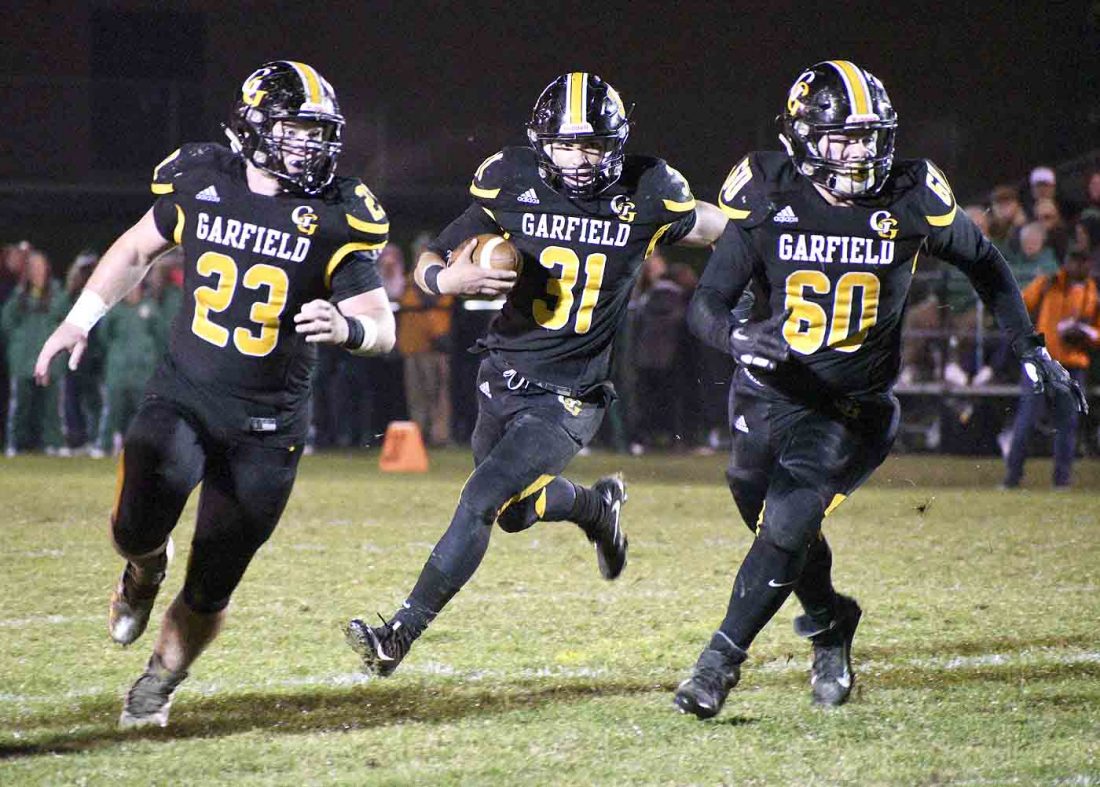 Staff photo / Brian Yauger Connor Hrubik, center, runs downfield with Jarrod Peters, left, and Shawn Barber blocking for him along the way on Friday in Garrettsville.

Staff photo / Brian Yauger Connor Hrubik, center, runs downfield with Jarrod Peters, left, and Shawn Barber blocking for him along the way on Friday in Garrettsville.

GARRETTSVILLE — When facing a perennial powerhouse like Moga-dore, mistakes have to be kept to a minimum.

Unfortunately for Garfield, it made a few too many, dropping the contest, 39-21, for the G-Men’s first loss of the season.

“The kids played hard, the kids played well, but at the end of the day, we made more mistakes than they did, and they’re hard to stop,” Garfield coach Mike Moser said.

Neither team got on the scoreboard in the first quarter, but Wildcats quarterback Will Popa threw a touchdown pass to Nathan Stephenson just 5 seconds into the second quarter.

Garfield, which has been known for its rushing attack, tied the game at 7 through the air, with Brody Swigonski throwing a pass to Jared Simon on a fourth-and-5. 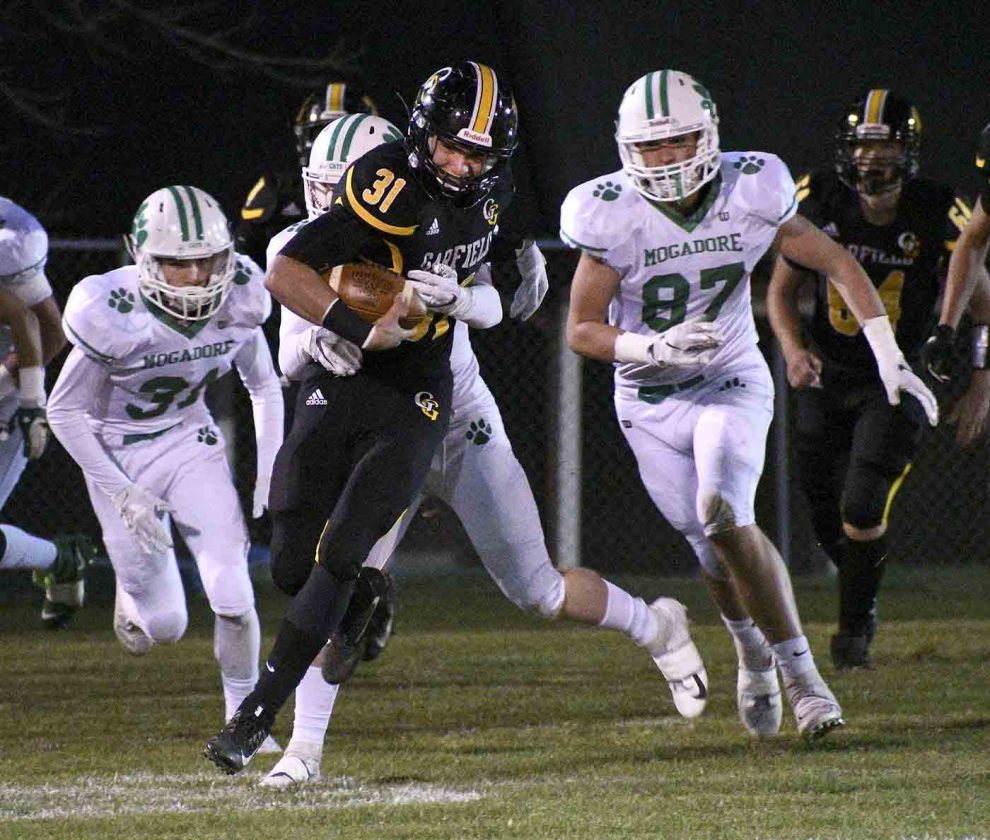 Mogadore responded right away, with an eight-play, 93-yard drive that ended with a touchdown rush from Tave Constantine.

Despite having all the momentum on their side, Garfield turned the ball over on downs with less than a minute left setting up the Wildcats in G-Men territory.

With 17 seconds remaining, Popa threw up a ball down the sideline that was caught by Stephenson to set up Mogadore in scoring position. On the next play, Popa hit Constantine through the air to give the Wildcats a 20-14 lead going into the break.

“We left a couple out there in the first half,” Moser said. “We let them score again right at the end of the half when it was 14-14 and it took a little bit of momentum away … It’s high school football, it’s not going to be perfect all the time. Credit goes to Mogadore. It’s not what we didn’t do. It’s what they did.”

The Wildcats continued to carry the momentum in the second half, forcing a three-and-out on Garfield’s opening possession. After a huge rush to set Mogadore up in scoring position, Nick Skye took it 19 yards to paydirt to go up 26-14.

“Once they got the momentum going, we were patching holes, dropping guys getting hurt,” Moser said. “We’re trying to patch everything and do the best we could… When the opportunities were there, they closed the deal, made some plays and we dropped a few.”

Within three plays on the following drive, Garfield threw an interception, Mogadore fumbled the ball and lost possession, and then Connor Hrubik scampered in the end zone to score for the G-Men.

Unfortunately for Garfield, that would be the last touchdown they scored. Mogadore went on to score two more and came out with the win. Despite the loss, Garfield made an impression on their conference rival.

“That’s a very good football team,” Mogadore coach Matt Adorni said. “They have a lot of good football players that poured their hearts on this field tonight.”

While the loss stings, the G-Men have another tough opponent up next in Crestwood. The Red Devils are coming off a 20-18 loss to Rootstown, so both teams are eager to rebound. First, however, Garfield (7-1, 2-1 Portage Trail Conference County Division) is going to let the loss sting to give them some fuel.

“We’ve got a lot of ball left to play,” Moser said. “If we’re lucky enough to get in the postseason, this will be something we look back on, and hopefully it’s a distant memory. It’ll hurt tonight, but we’ll use a 24-hour rule like we always do. We’ll let it hurt for 24 hours, and then we’ll start getting ready for Crestwood next week.”