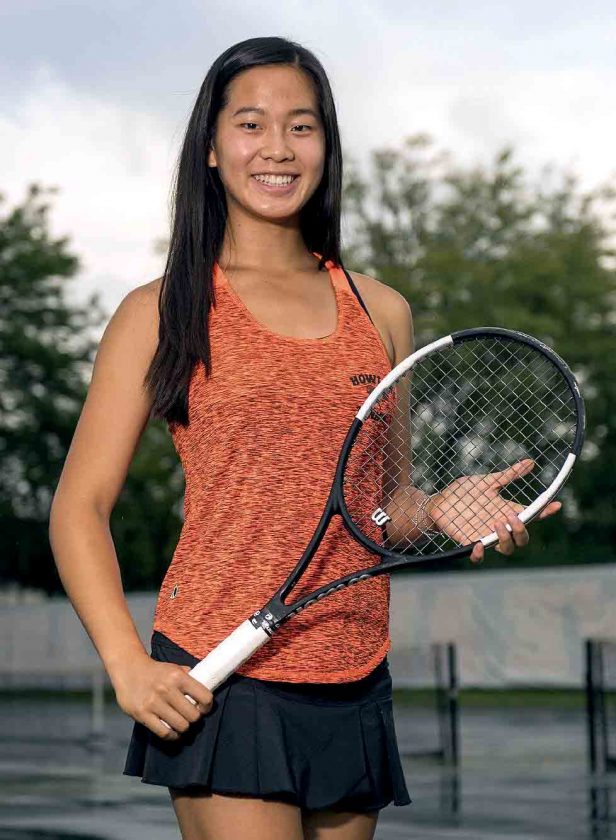 Kate Li had an illness last week, but it didn’t stop the Howland junior girls tennis player from claiming a four seed for today’s Division I Akron District at Springside Racquet and Fitness Club.

“She defied a lot of expectations based on being ill and whatnot with just her performance last week,” Howland coach Jerry Young said.

For her, this sport is a mental game.

“I’m going to try to focus on trying to get any distracting thoughts out of my head,” Li said.

Young believes in mental preparation and execution. Overconfidence or distractions can play into pitfalls in this sport.

“The mental game is so significant that it can change everything,” Young said. “Going into a match, whether they’re ranked in the state, won state, at the end of the day, it comes down to you versus yourself. Then, it’s your opponent. That’s why we’re hopefully optimistic with Kate (today).

“She’s growing as a player and a student-athlete.”

Serves to the left or right which might be out of reach or even one that is short, it’s no problem for Li.

“I’ll manage to get to them,” she said. “I would run them down no matter how hard they are.”

So, Li might be down 3-0 in a set. No worries. She can make the adjustment.

“I do a mental evaluation of what happened those first three games, what I’m doing wrong, what their strengths are,” she said. “I try to take out their weaknesses and take a different strategy if that can break through their momentum. I try to employ that if it works.”

It’s a matter of execution for the Howland junior, something she’s been doing all season for the Tigers.

“Kate’s mental game is exceptional,” Young said. “She has the uncanny ability to shut out a lot of things, which even adults can’t do sometimes. I’ve been able to witness it, just shut out other opponents, spectators and anything. She goes into her own little world on the court. It’s pretty magical to experience it.”