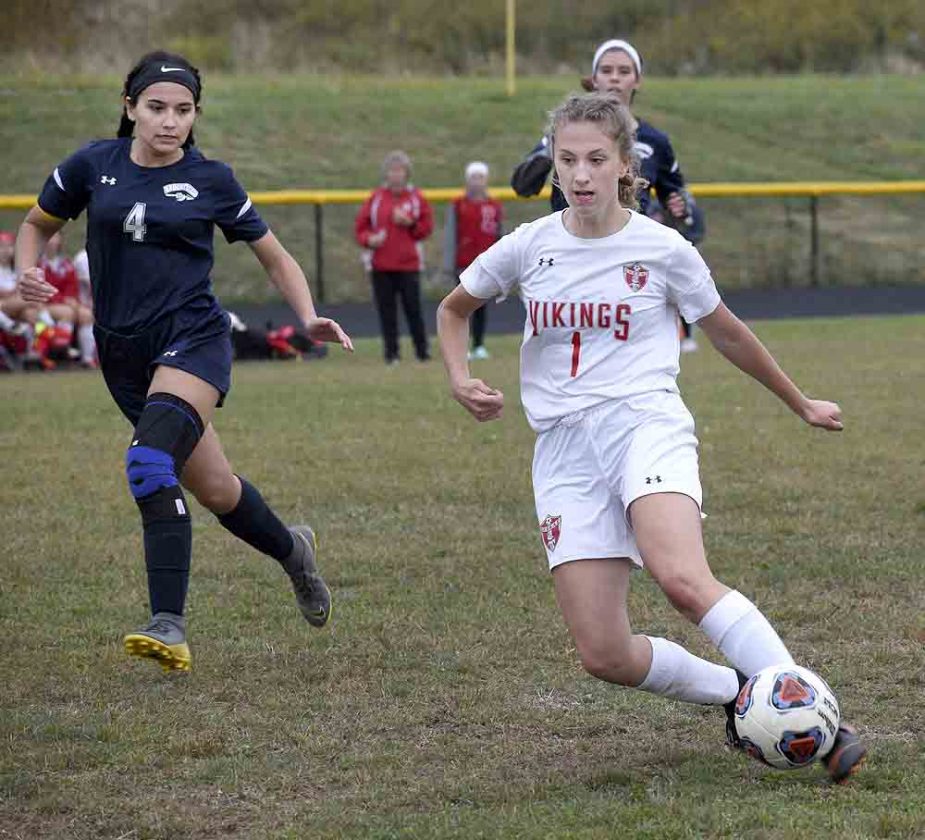 BROOKFIELD — After the first meeting this season between Brookfield and LaBrae, Vikings girls soccer coach Diane Downey was just happy to get the win.

In the second meeting however, Downey was much more content with her team’s performance, with the Vikings coming out with a 10-1 victory on Monday.

“(After the first game against Brookfield) I told them that they know we need to continue on,” Downey said. “We need to keep scoring, we need to play stronger defense. We’ve definitely worked really hard and hopefully we continue on.”

LaBrae may have had the next 10 goals, but it was Brookfield who got on the board first. Dru Gerace snuck a shot into the net to give the Warriors their only lead of the day early.

“We definitiely didn’t come out like we needed to,” Downey said. “I didn’t feel like we were very focused.” 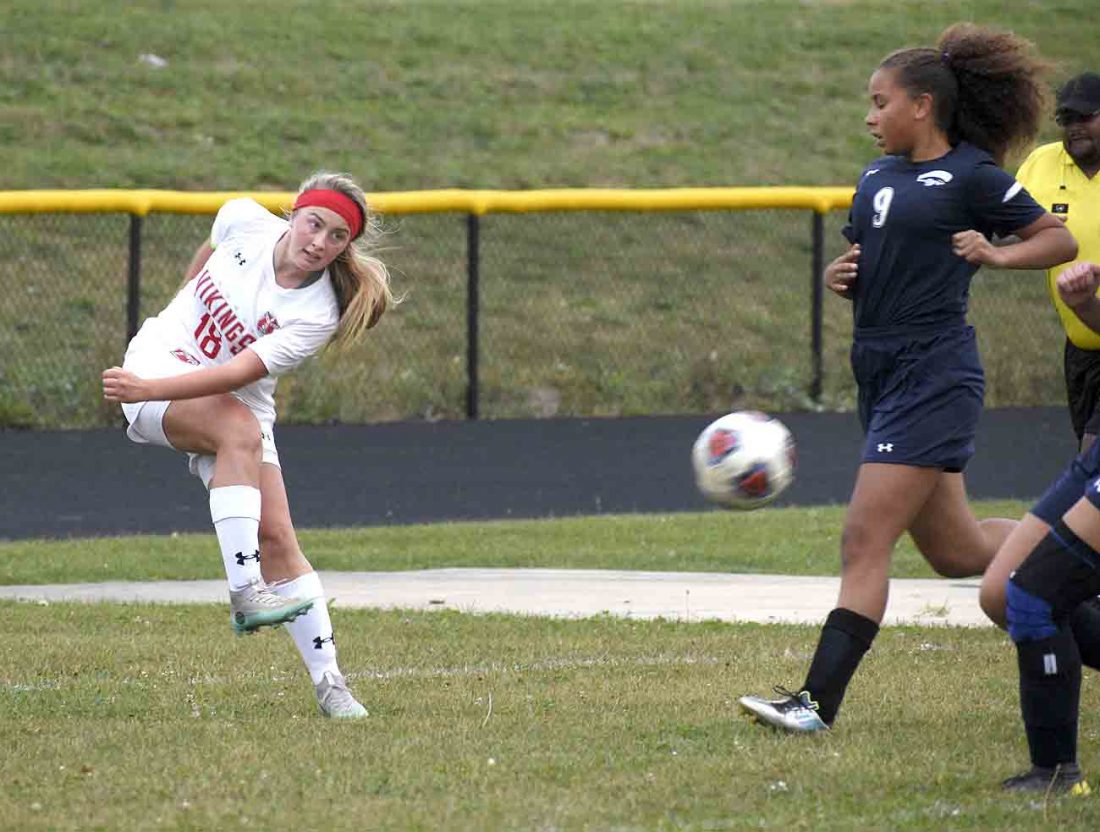 Staff photo / Brian Yauger LaBrae’s Paige Wilson, left, fires a shot at the net as Latesha Love of Brookfield attempts to step in and block it.

The Vikings were playing down one of their strongest players, so they needed to make some adjustments.

“My freshman (Laura McCoy) who scored a hat trick against this team the first time is out sick right now,” Downey said. “Since she wasn’t here I changed my lineup. I had a feeling that we weren’t going to gel very well in the beginning, but then we started turning it on.”

Briley Daniels did her part, scoring five goals for the Vikings. Aryana Hartman and Emma Jones both scored in the first half. Along with Daniels’ two, the Vikings went into halftime with a 4-1 lead.

Some new names had a chance to play for LaBrae and score. Ava English, Maggie Guy and Nadia McCoy all scored in the second half. Downey was visibly excited on the sidelines when her girls who haven’t had the chance before, had the chance to get a shot in the net. 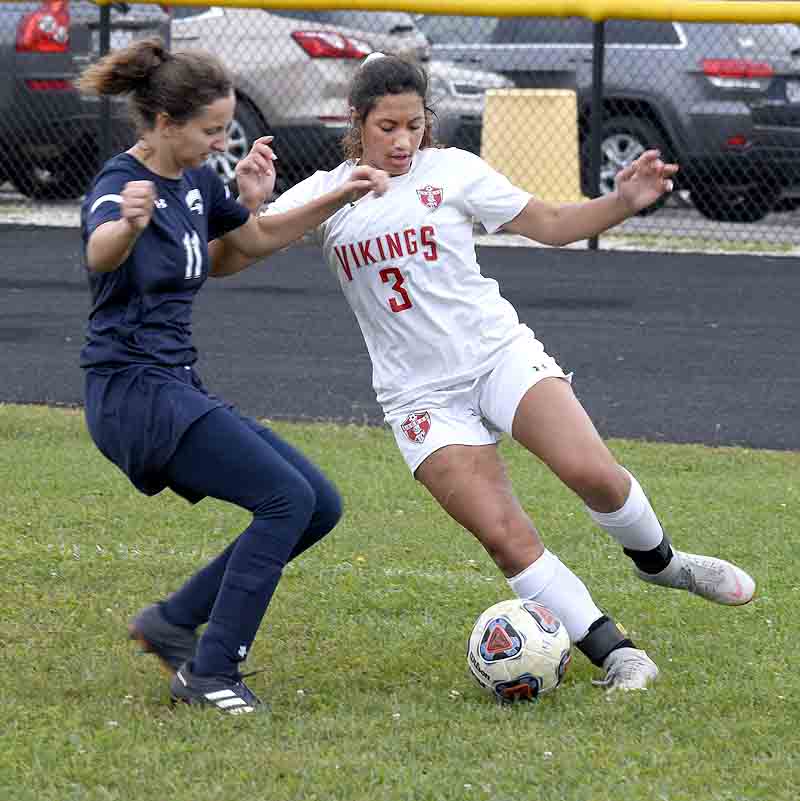 “I had some girls that haven’t scored before get an opportunity,” Downey said. “Maybe they’ve scored or maybe they haven’t scored many goals, so it was nice to see different girls be able to score.”

For the first time in Downey’s 13-year tenure with the program, LaBrae (11-2, 10-0) claimed the league title in huge fashion. Second-placed Champion has five wins.

“This is the first time in my 13 seasons with the program,” Downey said. “To become league champs is a great feeling.”

On top of that, the Vikings have a plus-65 goal differential over their opponents.

“We’re having a great season, I’m really happy with it and the girls are doing well,” Downey said. “We’ve had a couple losses where I think we could have done a bit better, but overall I’m very happy. We have a good offense going and we’re still working defensively and not giving up as many goals.”

LaBrae has two more games this week. They host Maplewood for their home finale and travel to Garrettsville to end their regular season against Garfield.

“Garfield is going to be a tough game for us,” Downey said. “I’m absolutely looking forward to that. It’ll be a good challenge to get us ready for the tournament.”

The Vikings are the top seed in the Division III Niles District bracket. They’ll host the winner of Valley Christian and Brookfield.