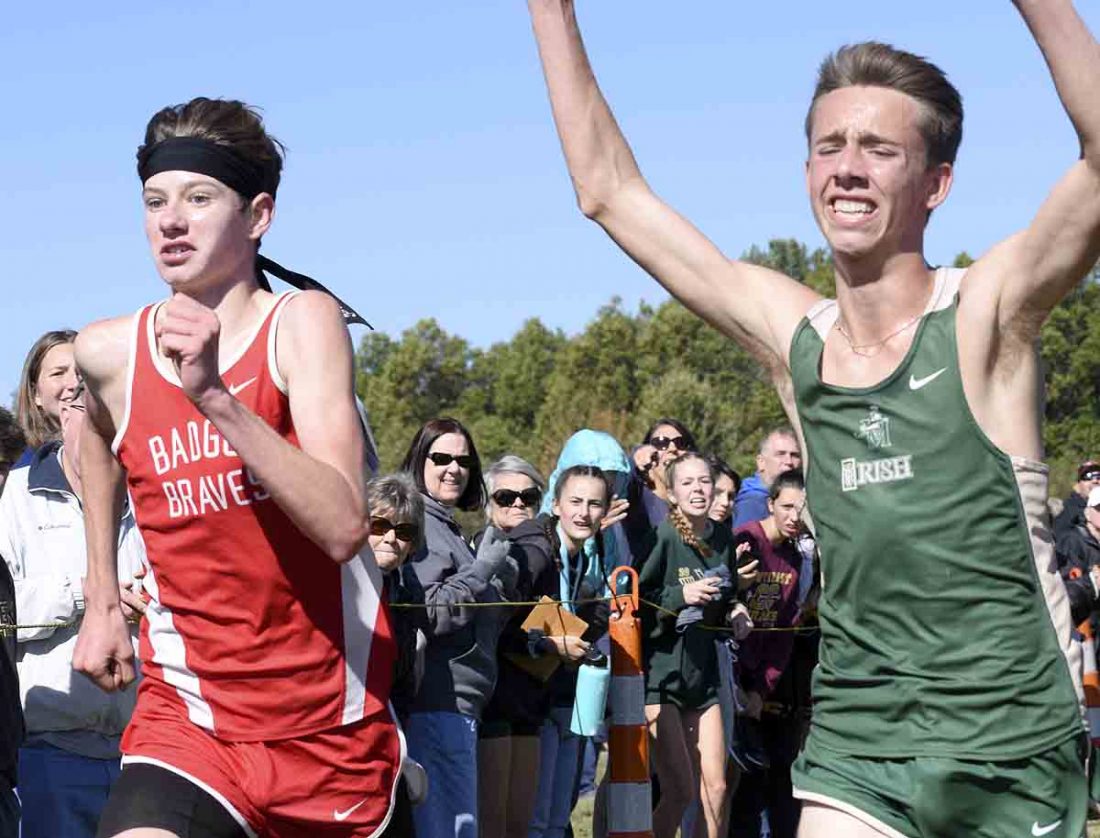 BAZETTA — Coming down the homestretch at the 2019 Legends Cross Country Meet were Badger’s Lincoln Hopkins and Chase Powers of Akron St. Vincent-St. Mary. The two were in a dead heat, but it looked like Powers had the victory.

As Powers stretched his arms out in supposed victory, Hopkins extended one final effort and crossed the finish line two-tenths of a second before his opponent for the victory.

Hopkins had a slow start, but picked it up at the right time.

“At the beginning I went off slow and I was like 50th or 60th,” Hopkins said. “Then throughout the whole race I tried to catch people and it just felt like the momentum of catching people was helping me. At the end, I knew I could get him (Powers), so the last 800 meters I kicked it in and gave it my all.”

That extra effort paid off for Hopkins as one thing was in his mind during that final stretch. 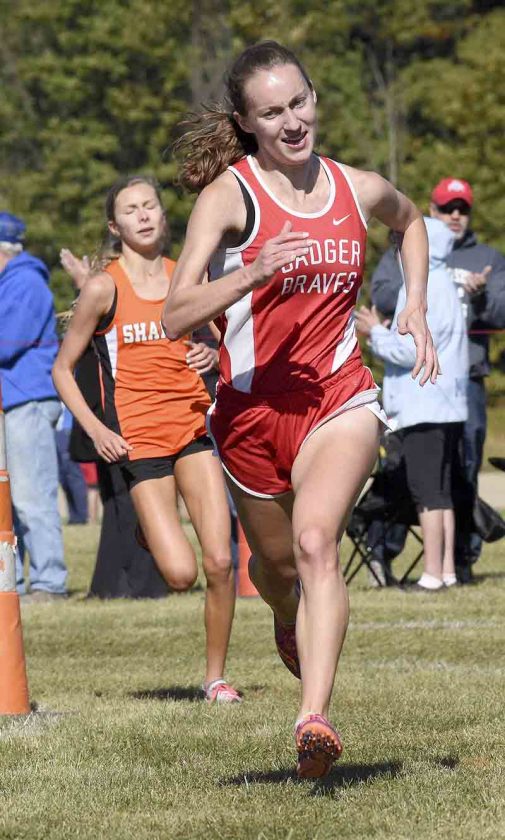 “I was just trying to catch him,” Hopkins said. “I was going all out, as fast as I could. All the way to the finish line.”

As a team, the Braves placed sixth. Jacob Zahoransky finished not long after his teammate, finding himself in 10th place. Jarrett Wildman finished 58th and Clayton Jablonski finished 75th. The Braves ended with a total time of 1:28:54.2

Defending state champion Miranda Stanhope battled a cold but powered through to finish in second in the girls race behind another St. Vincent-St. Mary runner, Theresa Hagey.

“I haven’t been too sick, but I’ve had a cold and been feeling pretty sluggish and tired this week,” Stanhope said. “I’ve just been trying to get through my training and getting some solid work. It wasn’t exactly how I wanted it to go, but I’m working with what I have.”

While not overjoyed with the result, Stanhope was glad to battle back after a rough start.

“I was pretty content with my race,” she said. “It didn’t go exactly how I planned it to, I didn’t get a very good start and I had to take some energy to work back up to the front pack, so I was feeling tired midway through the race. But I hung in there and put on some surges and tried to stay with it.”

McDonald had the top area team in the girls race, finishing in second with Maplewood right behind in third and Mineral Ridge in ninth. Anna Guerra was the fourth-place finisher, falling behind Gianna Labbiento, who came from Sharon. Bella Wolford, who finished 21st, medaled, and Sela Jones finished just on the outside of the top 25, placing 26th.

Later on in the afternoon, Howland had a strong performance in the large school meet, placing second as a team. Freshman Megan Hipple was the fourth-place finisher, running a 19:04.4. Teammate Maria Dellimuti wasn’t far behind, finishing seventh with a 19:19.3. Elenie McNally (12th) and Molly Yasnowski (18th) rounded out the medalists.

With the tournament starting and prior success for the Braves, Badger is looking forward to seeing how the rest of the season plays out.

“The team is doing really good this year,” Hopkins said. “This is the best team my school’s ever had. We’re so excited to see if we have kids go to state.”