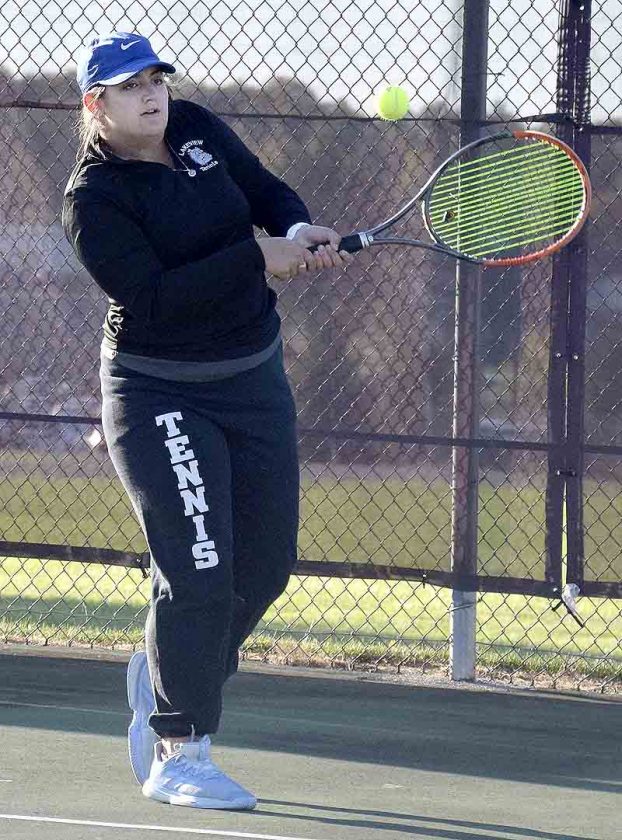 BOARDMAN –The brisk breeze moved through the corridor between the barrier separating the upper part of the Boardman High School athletic complex and the five caged tennis court on the other side.

The 40-degree weather made most shiver during the semifinals and finals of the Division II Boardman Sectional girls tennis tournament Saturday morning.

Lakeview’s Laura Garvin, the top seed in the sectional, appreciated the break from the humidity experience during Monday’s matches. She took advantage, beating fourth-seeded Cardinal Mooney’s Marissa Landers in the semifinals, 6-4, 6-2 and Struthers’ Daniella Mendel, 3-6, 6-3, 6-0 in the singles final.

Ursuline’s doubles team of top-seeded Anna Morgione and Emma Thornton rolled through the competition to beat Poland’s Ally Andrews and Adeline Schweers in the semifinals, 6-2, 6-1, and third-seeded John F. Kennedy Caitlyn Condoleon and Sophia Zamarelli, 6-2, 6-1 in the final.

“As soon as we play, I’ll be fine,” Morgione said before her semifinal match.

Andrews and Schweers beat Struthers’ Renee Leonard and Emily Vo in the third-place match, 6-2, 6-4, while Condoleon and Zamarelli beat Leonard and Vo in the semifinals, 6-3, 6-0.

The singles and doubles are seeded one through four for next week’s district in Akron based on their finish Saturday.

DIVISION I: Howland’s Kate Li is a four seed at next week’s Division I district in Akron.