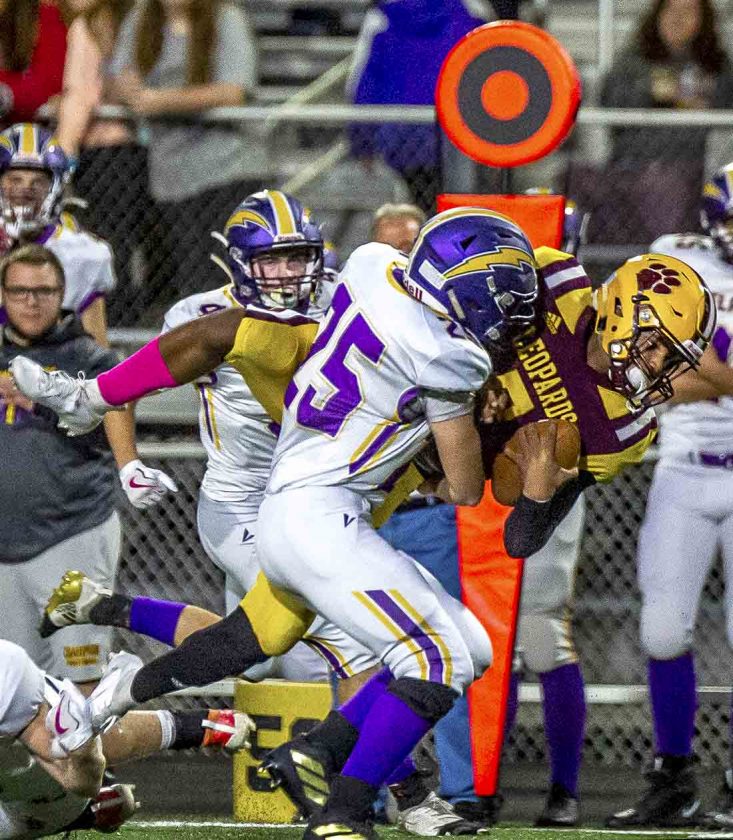 LIBERTY — An observer in the football press box at Liberty High School Friday was surprised by the large turnout of fans that made the trip from Champion to support the Golden Flashes.

Except for a section devoted to the Flashes’ marching band, most of the visitor’s side was full. It looked like a scene from Firestone Stadium in Akron when the Flashes softball team was winning one of its nine state titles.

The football team has certainly caught the attention of the Champion community, many of whom watched the Flashes power their way to a 25-6 win over the Leopards in an All-American Conference Blue Tier game.

“It feels amazing,” offensive tackle Zach Scher said. “The whole community is here. Everyone knows who we are now. It hasn’t been like this for a very long time.”

The Flashes, who entered play sixth in the Division V, Region 17 computer standings, have a 6-1 record and a 3-0 mark in the conference. They’ve won six straight since a 7-6 loss to Warren John F. Kennedy in the season opener. 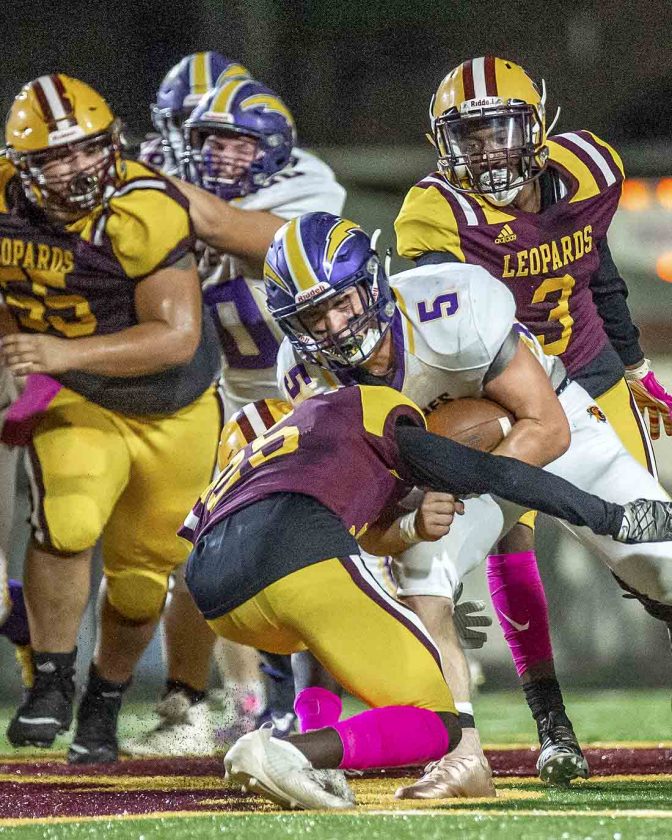 The latest win was accomplished with sheer strength in the trenches on both sides of the ball. Offensively, the Flashes rarely went with their spread set, with coach Tim McGlynn utilizing a power package to set up the running of junior Austin Willforth. The defense played well up front, allowing only a fourth-quarter touchdown on a 29-yard scramble by Liberty quarterback Daveyon Williamson.

“We knew they were going to be stout up front,” McGlynn said.

“Everybody is going to play their best game against us. If we can just weather the storm and keep doing what we can do, we’re going to continue to do that.”

Willforth ran for 59 yards and a 2-yard touchdown on 26 carries before sitting out a good deal of the second half with an injury. Willforth also scored on a 24-yard pass from quarterback Nick Stahlman.

The Flashes’ power attack is fueled by the work of center Parker Paniagua, guards Levi Grimes and Logan Ainsley and tackles Scher and Christ Brooks. Tight ends Nate Holt and Will Skebe add to the blocking scheme.

“It’s a very mental side of it where we have to go in and pound the ball,” Scher said. “They know what we’re going to do, and we’re still going to do it.”

The Leopards are 1-6 and 1-3 in the conference. They had two turnovers in the first half along with a short punt. A snap over the punter’s head in the third period set up Champion at the Liberty 8.

“Against any team, whether it be Champion or whoever, you can’t give them short fields and expect your defense to dig ourselves out,” Leopards coach Chester Allen said. “We’re not the ’85 Bears. We’re trying to do things the right way and put guys in position. Sometimes it’s difficult.”

Stahlman capped an 11-play, 43-yard drive with a 1-yard sneak for the game’s first score. An offside penalty against the Leopards on the conversion play moved the ball to the 1, setting up another sneak by Stahlman to push the lead to 8-0 in the second quarter.

Gotti recovered another fumble on the Leopards’ next possession. Starting from the Liberty 31, the Flashes increased their lead to 18-0 on a 23-yard field goal by McDermott as time expired in the half.

The high punt snap by the Leopards led to Willforth’s 2-yard scoring run and a 25-0 lead. The Leopards avoided a shutout when Williamson escaped the rush and ran for a score. The big play on the drive was a 35-yard run by Donte Venters.