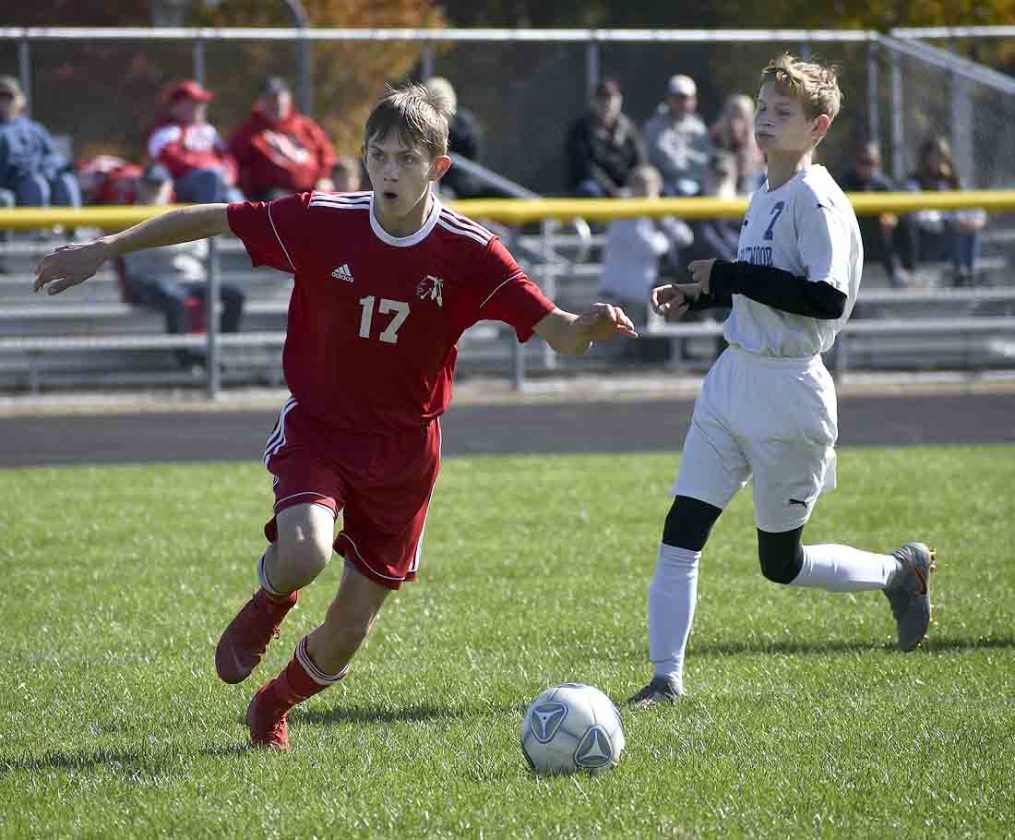 Staff photo / Brian Yauger Luke Springer (17) of Badger looks for an open teammate as Eddie Morse of Maplewood trails the play. The Braves beat the Rockets on Saturday.

VERNON — A common cliche among coaches is how hard it is to beat an opponent three times in a season.

Badger did just that Saturday when it took down visiting Maplewood, 9-0, in a Division III sectional bracket final.

“It was a well-played game,” Badger coach Justin Deraway said. “We were able to hold possession pretty well throughout and we had opportunities that we took advantage of.”

The Braves scored three goals in the first 10 minutes. Junior Max Wilson fired the first one past the Maplewood goalkeeper five minutes into the game.

Luke Springer buried the next two within two minutes of each other, forcing the Rockets to rotate players. Despite the changes, the Braves kept rolling, scoring twice more before halftime.

“You always want to start the tournament off with a good game at home,” Deraway said. “Maplewood played really well all year. Once we got up on them, they started to move some people around. I think they were getting some younger guys some playing time.”

Wilson scored once more at the midway point of the first half and Ethan Luchette’s goal made it 5-0 at intermission.

Badger tacked on two more goals in first 10 minutes of the second half, with Luke Ritch and Bryan Chaverria doing the honors. About five minutes later, Jack Springer made it 8-0.

“Luke has been scoring for us all year,” Deraway said. “He’s kind of the guy we look towards when we need to get on the board.”

Luke Springer was the team’s regular-season scoring leader, with 26 goals. While not being the only reliable scorer on the roster, he’s someone Deraway can rely on.

“Luckily with our team, we have a number of guys that can put them in the back of the net,” Deraway said. “His brother (Jack Springer) does a really good job, the center mids do too, when they get up into the attacking zone. Luke is definitely someone that we look towards.”

On the back end, Badger goalkeeper Dylan Miller posted his 12th shutout. As time on the clock ticked away, the Rockets began to ramp up the pressure, leading the Braves’ defenders to rally and make sure Miller kept his sheet clean.

“That’s always something our defense strives for,” Deraway said of the shutout.

The Braves will play Andrews Osborne in a Division III Gates Mills District semifinal on Tuesday. Badger defeated Andrews Osborne 2-1 in last season’s sectional final. Despite not seeing the Phoenix this season, Deraway knows his team is in for a challenge.

“I haven’t been able to get up there to see them, but I know from past experiences that they’re going to play a good, physical style of soccer,” he said. “They play excellent soccer up near Cleveland and it’ll be a good game.”