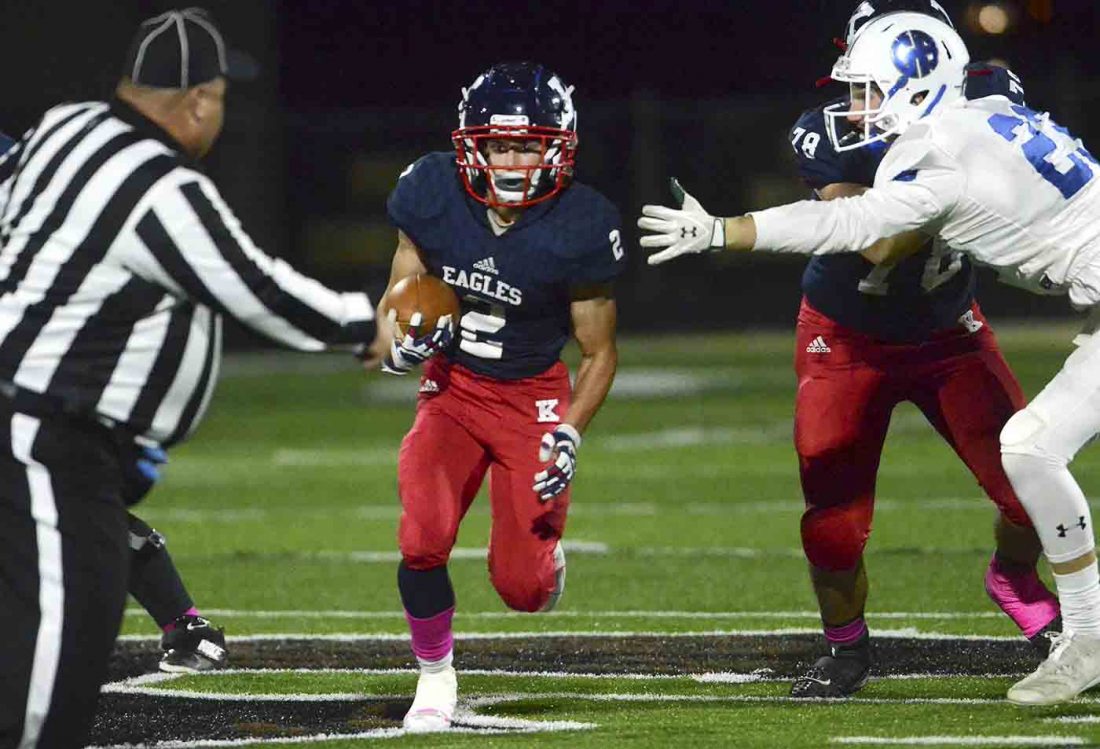 Each of the two ran for more than 100 yards in the Eagles’ 35-13 North Coast League, White Division victory over Gilmour Academy. Yet no one wanted to talk about the running backs following an impressive come-from-behind win in which JFK (5-3) dominated the second half.

“As the game went on, our line, I can’t give them any more credit, they just kept wearing them down, and they couldn’t stop us,” said Likens, who ran for 171 yards and three touchdowns. “We had a pancake (block) every play. I mean, I scored three (touchdowns), but that’s all because of them. They pounded the crap out of them.”

Overall, the Eagles overcame an abysmal start to run for 296 yards and five TDs.

JFK fumbled on its first offensive play of the game, and Gilmour (4-4) scored from 9 yards out on the ensuing play for a 7-0 lead. The Eagles turned the ball over two more times in the first quarter, including an interception that was returned to JFK’s 26-yard line. 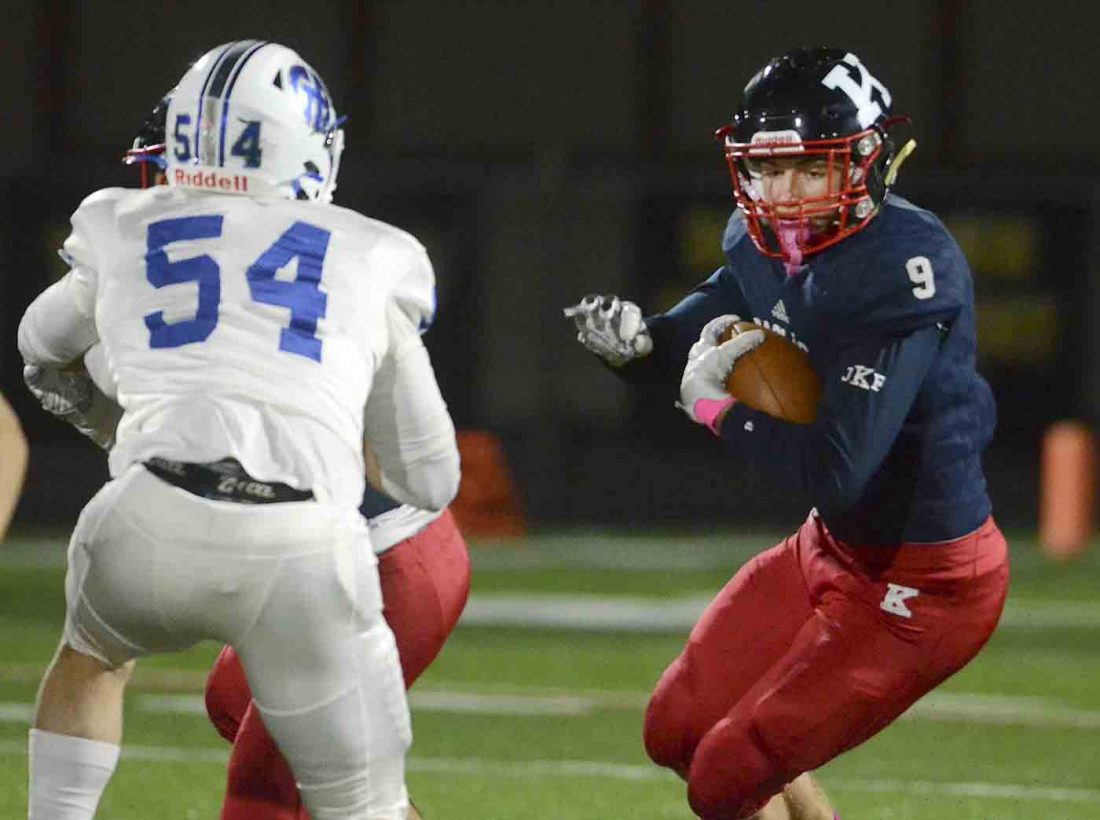 The defense was up to the task, though. JFK blocked a field goal attempt after stopping Gilmour on three plays following the interception. The defense didn’t allow a first down until late in the first half and kept the Eagles in the game until its offense came around.

“We had a great week of practice,” JFK coach Jeff Bayuk said, “and we came out in the first quarter and looked like we hadn’t practiced all week. …

We turned the ball over three times in the first quarter, and you can bury yourself (doing that), and we fought our way out of it. Our defense kept us in it until we could get up 14-7, and I’m just real proud of the effort they gave.”

The speedy Likens tied the game at 7 with a 47-yard run off the left side with 9 minutes, 8 seconds remaining in the second quarter. The Eagles went up 14-7 late in the first half. Christian Marantis threw a slant pass to Gabe Green, who made a defender miss and raced 64 yards down to the 3-yard line. Hollobaugh scored on the next play.

Bayuk and the Eagles were still rather upset with how they played going into halftime. 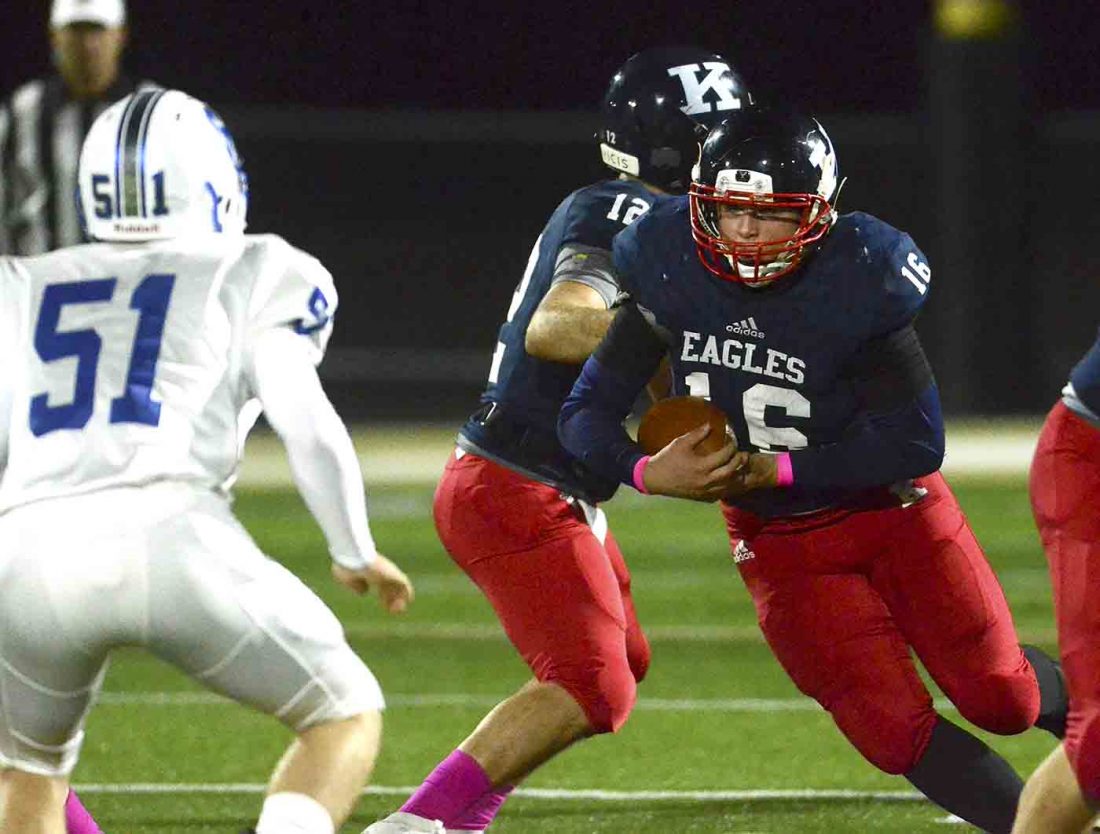 “We had pretty nice talk at halftime about how we’re supposed to be playing football when we have the K on our helmets,” Bayuk said. “They came out and did a great job in the second half, made no doubt about that on the opening drive and then the rest of the half.”

That’s when the offensive line took over.

A group made up of Patrick Valent, Scott Mintus, Eddie Kiernan, Will Toth, Earl Hill and Jaylin Turner dominated the line of scrimmage and opened up gaping holes for Likens and Hollobaugh, who added 109 yards and two TDs on 15 carries.

With the line clearing the way, the quickness of Likens combined with the power of Hollobaugh was too much for Gilmour to handle. Likens busted loose for a 45-yard TD on the Eagles’ first drive of the second half, giving JFK a 21-7 lead, and Hollobaugh added a 4-yard TD run a few minutes later to essentially seal the victory.

“That’s a nice 1-2 punch to have,” Bayuk said. “Jesse, who’s an elite sprinter, and then Cam who gives you that power and he’s difficult to bring down … And in the second half, the line really established itself.”

The win was a big one for a JFK team that has been a bit inconsistent this season. While they’re positioned well in the playoff picture and have some key wins over Champion and Campbell, weekly improvement is what has been missing for the Eagles.

They hope Friday was a turning point.

“We’ve been waiting for this game to come where we can turn the corner,” Likens said, “and finally, through the second half of this game, we turned that corner, and that’s what we need going toward the playoffs.

“We’ve been inconsistent, even with our practices, but this week we finally had consistency where each day we got better and practiced hard.”