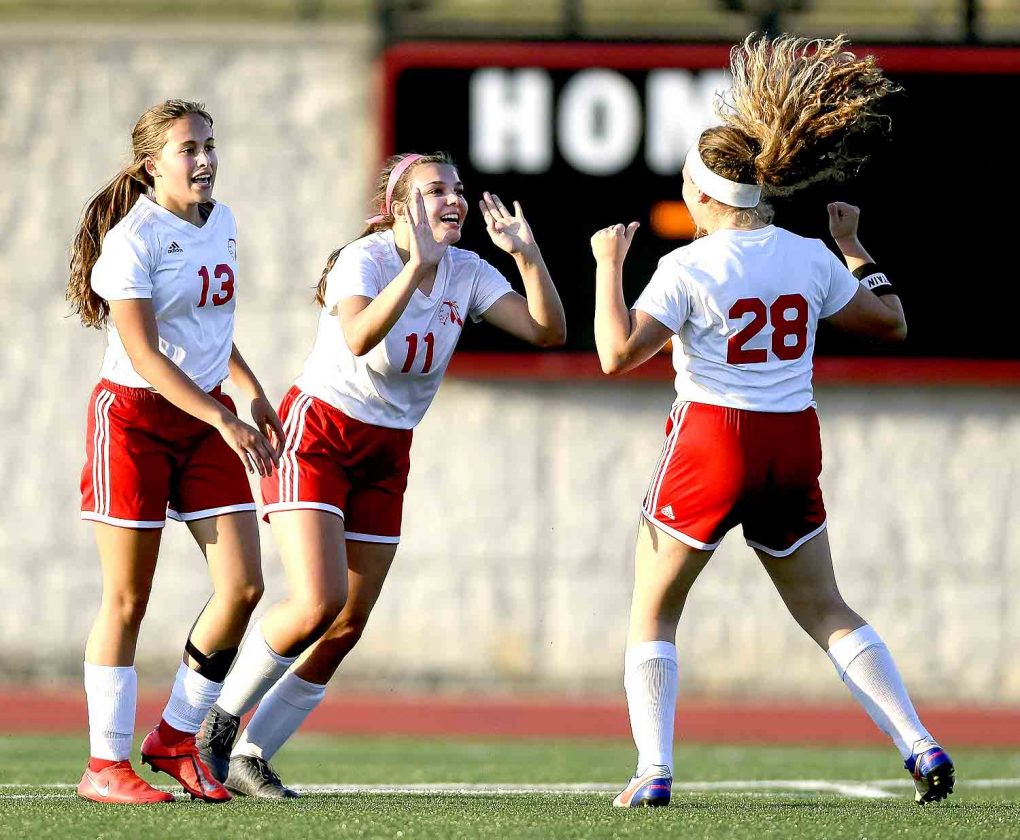 YOUNGSTOWN — What started off as a back-and-forth battle between the Ursuline Fighting Irish and Badger Braves turned into a second-half rout on a warm night at Youngstown State University.

Ursuline came out on top with an 8-2 win over a worn down Badger team.

“We might not be a big squad, but we’re solid.” Ursuline coach Roy Schmidt said following his team’s victory. “The girls played well, actually they played too loose in the first half. We were working on some things, we have a goalkeeper injury we’ve been working with, and wanting to give her a little time, so then the backup came on.”

Badger came into Tuesday’s game with a roster plagued with injuries, and Braves coach Kenneth Donaldson knew that his team was going to have to battle harder.

“They (Ursuline) played really well. Unfortunately, we were down a few of our starting players, so we were out there the whole time with some of our normal second string.” 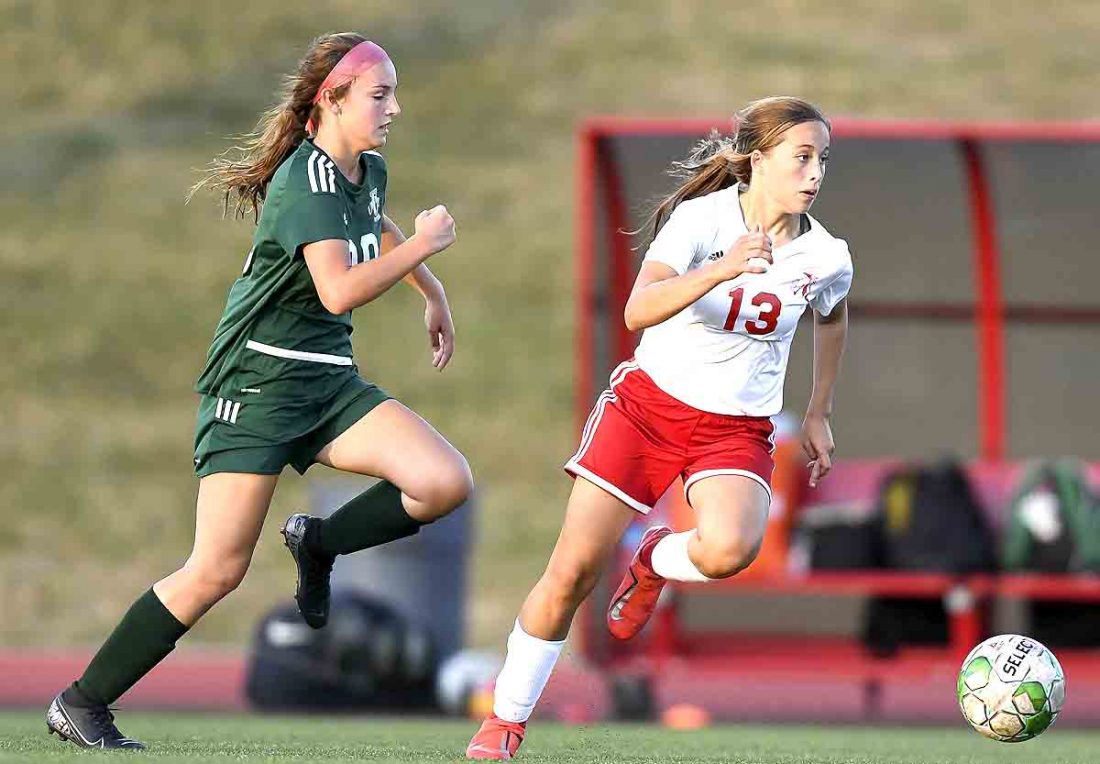 Ursuline came out of the gate firing, as Olivia Puhalla got the Fighting Irish on the board early with a goal. She was quickly followed by Taylor Tomlinson, who scored to make it a 2-0 game within the opening minutes of the match.

The Braves (3-2) wouldn’t back down so easily. Eve Flowers’ goal cut the deficit in half before Tomlinson struck back and her second goal pushed the score to 3-1 in favor of Ursuline.

Badger answered back with a goal late in the first half off the foot of Kristen Louma to make it a 3-2 match going into halftime.

Ursuline then scored five consecutive goals in the second half, while also shutting out Badger to compete the 8-2 win.

“As far as when we were open, we were trying some, not necessarily new, but some offensive tactics that we used when we were playing in other games,” Schmidt said. “We wanted to see how far we can push that, and apparently we can do pretty well with it. 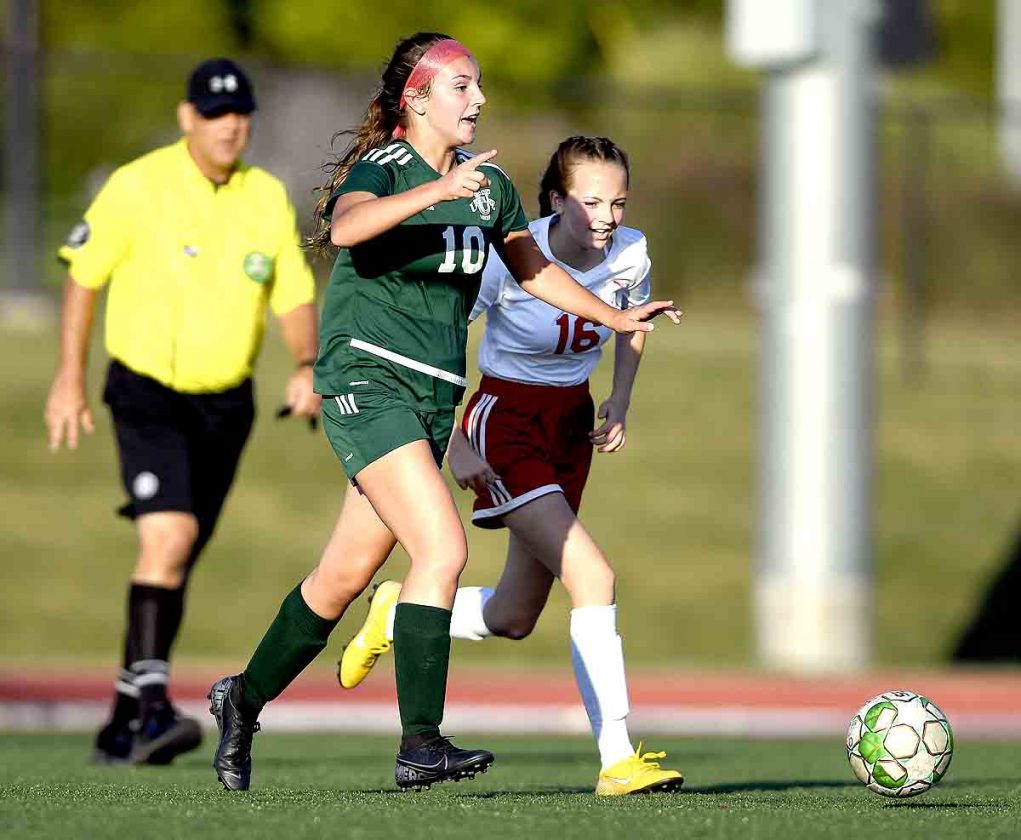 Correspondent photo / Robert Hayes Cara McNally (left) directs Ursuline while being pursued by Ally Penn (right) of Badger. McNally had a goal and four assists in her team’s 8-2 win over the Braves.

“But instead of just continuing on in that manner, we figured, well let’s start doing some different things, try players in new positions, and having some numbers on the bench I was able to do that.”

Tomlinson’s performance was stellar, as she ended her night with a total of four goals. She credited her teammates following the game.

“Just the teamwork behind it, being able to get those through balls up, there was communication, everything, all of that, it was really just a whole team effort,” she said.

The Fighting Irish (5-3) have had success, and Tomlinson has seen her team improve through the first part of the season.

“Since our first game in the season, we’ve struggled sometimes and we do four practices a week, so it’s really just something that we work on at practice,” she said.

“We talk at the beginning of every practice on some stuff we need to work on, and then we focus that practice, or at least one of those practices, on one of those key items.”

Cara McNally also had a solid performance offensively, as she chipped in with a goal and four assists for the Irish. McNally had a plan going into the match.

“(I was) just really looking for my teammates, because that’s a big part of the game, and when I’m not open, I know that other people are obviously open,” she said. “So I just really try to look for them, and try to get them to go on their runs.

“We knew we were playing pretty slow in the first half, we knew we were better than that. At halftime we kind of talked, we cleared up what needed to be cleared up. We needed to communicate more and I think we executed that in the second half.”

With Badger’s roster being short, some of their backup players saw playing time, which Donaldson thinks can be helpful.

“Having the younger players out there, getting some playing time was definitely a plus for us. I foresee us giving a better run when we play them (Ursuline) at our home,” Donaldson said.

“It’s amazing, I’m a senior, so these past two years have been harder for me, my freshman year was kind of like this, but this team is one of the best ones we’ve had in my four years here,” she said. “It’s been a blessing to get them (goals), especially in my final year, and have a successful season like this.

“I know that there’s some games that we have rivalries against. We’ve never beat some of these teams, and it’s like, it puts a little extra fire in my step, especially with the team that we have this year.” 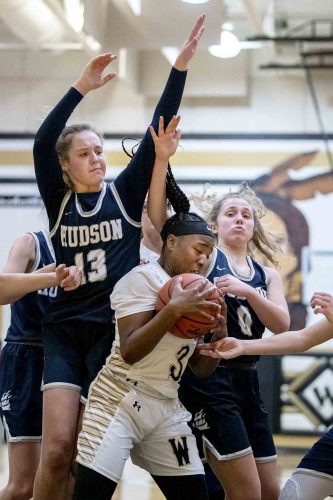