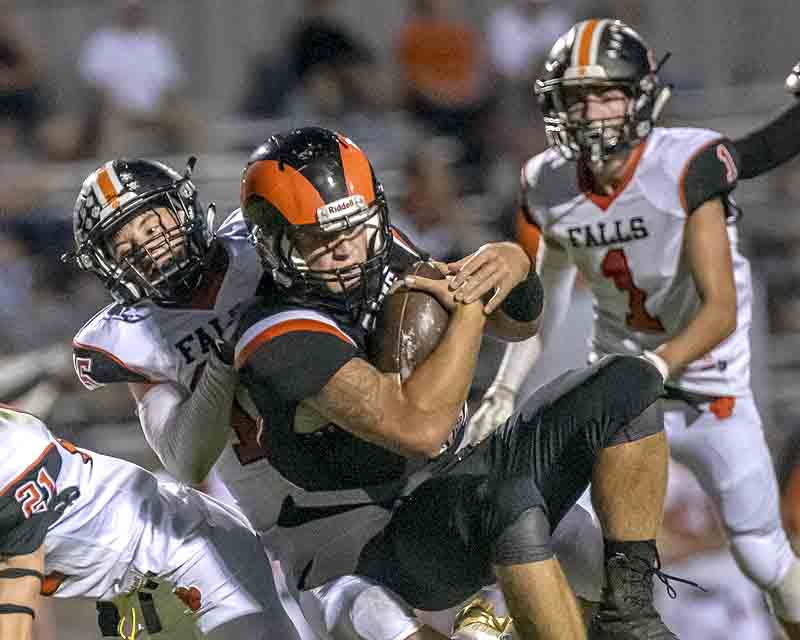 MINERAL RIDGE — The stands were filled with fans sporting orange and black on Friday the 13th as the Mineral Ridge football team played host to Newton Falls.

The supposed full moon was never seen, but there was an unease about whether the weather would force a postponement at some point. With temperatures dropping and some strange play on the field, it all seemed like it was Halloween.

In the end, the Rams treated their fans to a 26-14 win that kept them unbeaten through three weeks.

“We didn’t play great, but we made enough plays to survive and it’s crazy to be 3-0,” said first-year Mineral coach Brian Shaner. “We had some big efforts from a lot of our guys and they just bought in and believe in themselves now.”

Shakir Perkins was solid on both sides of the field as a running back and outside linebacker. He made his biggest play on defense when he tricked Newton Falls quarterback Nicholas Oyster into throwing an ill-advised pass. After completing several short passes toward the sidelines, Perkins waited for the route to be run again and stepped in front of receiver Adam Honeycutt, intercepted the pass and raced 77 yards for a touchdown that gave his team a 20-7 lead with 5:33 in the third quarter. 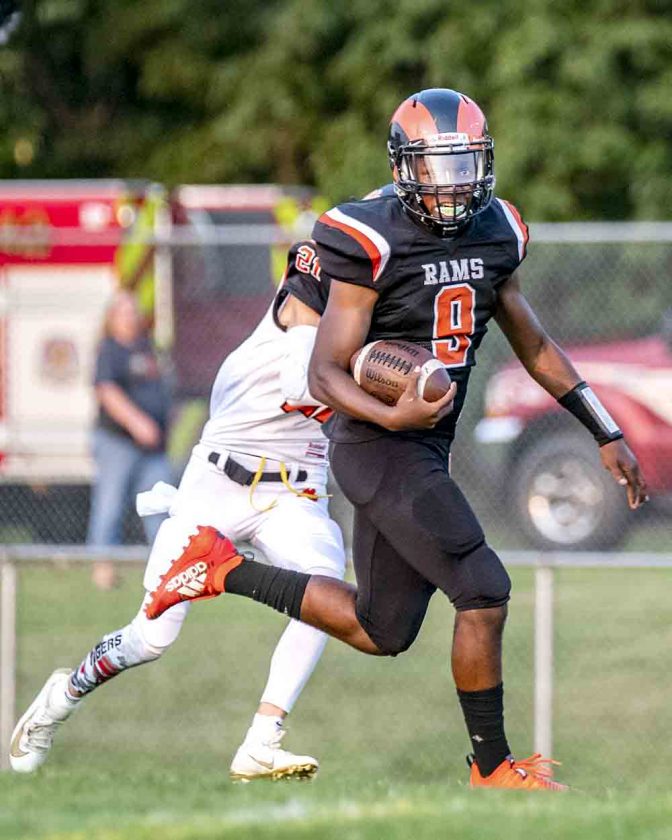 “Shakir played one whale of a game and left everything on the field on both sides of the ball, “ Shaner said. “He just did it all tonight. That was the biggest play of the game because it was basically a 14-point swing.”

Newton Falls, which fell to 1-2, failed three times to put points on the scoreboard after reaching the red zone. After Oyster connected with Jacob Wright for a 33-yard touchdown that pulled the Tigers within 14-7 early in the second quarter, they had a first-and-goal from the Ridge 10-yard line. But the Rams’ Randall Miller intercepted a third-down pass.

Early in the second half, a strong Newton Falls’ drive was thwarted on a fourth-and-2 incomplete pass at Mineral Ridge’s 18. Trailing 20-7 midway through the fourth quarter, the Tigers faced a first-and-goal at the Rams’ 4, but a pair of quarterback sneaks were marked inches short of the goal line to end that threat.

“We never gave up and I like the fight and the difference in the game was two or three plays,” Tigers coach Mike Gillespie said. “We were right there, so close.

“We are without two starters on the offensive line and we’re using a freshman and sophomore up there, so there are some growing pains. We also have to limit our penalties and become more disciplined. Many of those penalties really hurt us tonight and they were frustration penalties.”

Ridge quarterback Dakota Edwards sealed the outcome, racing 50 yards for a touchdown with 7:59 remaining. He finished with 88 yards rushing and two touchdowns on 18 carries and was 8-for-16 passing for 95 yards, including a 4-yard scoring strike to Miller to open the scoring.

Wright returned the following kickoff 80 yards for a touchdown, but the Tigers were unable to reach the red zone in their final possession. Honeycutt had seven catches for 98 yards and Wright had a pair of catches for 98 yards as Oyster finished 9-for-25 passing for 196 yards with three interceptions.

The Tigers were penalized 11 times for 100 yards, but three or four of those were dead-ball, unsportsman-like infractions.