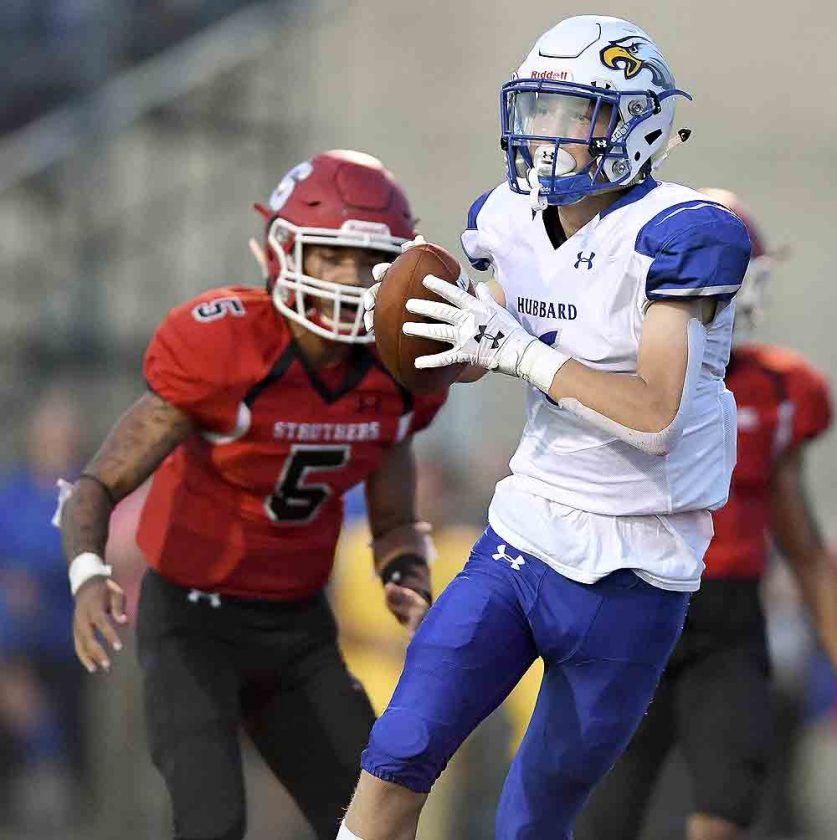 STRUTHERS — Friday’s contest between the Hubbard Eagles and Struthers Wildcats looked to be one of the better games on the schedule in the Mahoning Valley, with both teams boasting winning records.

The game didn’t disappoint, as a gritty, hard-fought affair ensued between the two schools, with the Eagles coming out on top, 22-16, at the Laddie J. Fedor Field in Struthers.

“Just proud of these guys tonight, man,” Hubbard coach Brian Hoffman said. “That was a great game from both teams. I mean, it was a will to win; we made plays when we had to on both sides of the ball. I’m just proud of them, just letting it sink in right now. But you know, we had a rocky start to the season. We won our last two, but we really weren’t playing that great offensively.

“Tonight we found a rhythm, I feel good about where we’re going forward with our offense.”

One of the stars of the game was Hubbard (3-1, 1-0 Northeast 8) quarterback Cameron Resetar, who led his team to a game-winning drive late in the fourth quarter, which he capped off with an 11-yard touchdown run with 1:17 left on the clock.

“Oh my gosh, it was just so electric,” Resetar said about the game-winning drive. “I try to motivate my team and get them ready because after (Struthers) scored, I knew our heads were down a little and we just had to get them regrouped.”

Both teams pounded the ball on the ground, as the Wildcats and Eagles combined to only pass the ball 16 times and combined to rush for 308 yards.

The back-and-forth affair began when Struthers’ Tyrese Hawkins launched the ball to Aiden Hall for a 59-yard touchdown. Hawkins then ran in for a two-point conversion to give his team the early 8-0 lead.

Hubbard answered in the second quarter with a 7-yard touchdown pass from Resetar to Nate Bencetic. Resetar also ran in the two-point conversion to knot the game at 8-8.

At the other side of halftime, Timothy Caffey gave the Eagles their first lead of the game on a 16-yard touchdown.

The Wildcats (2-2) retook the lead in the fourth quarter on a 2-yard run by Adrian Brown, and another two-point run by Hawkins put his team up 16-15.

Resetar and the Eagles responded with the game-winning drive.

“They played physical, and just one of those limited possession (games), and you got to take advantage of all of them,” he said. “And they made more plays than we did.”

Bencetic caught two of the Eagles four completed pass, but both were big plays. Besides his touchdown in the second quarter, he also caught a 14-yard pass late in the game to extend the drive.

He sai d he was surprised when he caught the touchdown.

“I don’t know, it was kinda shocking to me,” he said “There was really nobody there. I just caught it, turned around and was like, ‘I just did that.'”

“You just got to keep working and it’ll come to you one time.”

Hoffman kept his team focused on the game-winning drive.

“I said, ‘Look, this is it, man. We talked about this all year in the offseason, we knew this was going to be a premiere game in the area and we want to finish this drive. We have the opportunity to end this on our terms. Let’s end it on our terms,’ and there was way a field goal was in my mind, we wanted to score.

“We were in position for (a) field goal, and we got capable kickers, but I wanted to finish it, I wanted it in the end zone.”

Resetar said he wants to keep Hubbard (3-1) clicking, heading into next week’s matchup with Jefferson.

“I definitely think this win puts us over the hump, we just got to stay humbled and look for next week versus Jefferson.”

Meanwhile, Kuntz said he wants his team to clean up on errors.

“Just the dropped snaps and penalties can’t happen,” he said. “But, (the) kids competed, and we just got to make a couple more plays.”