Hanging on for a win 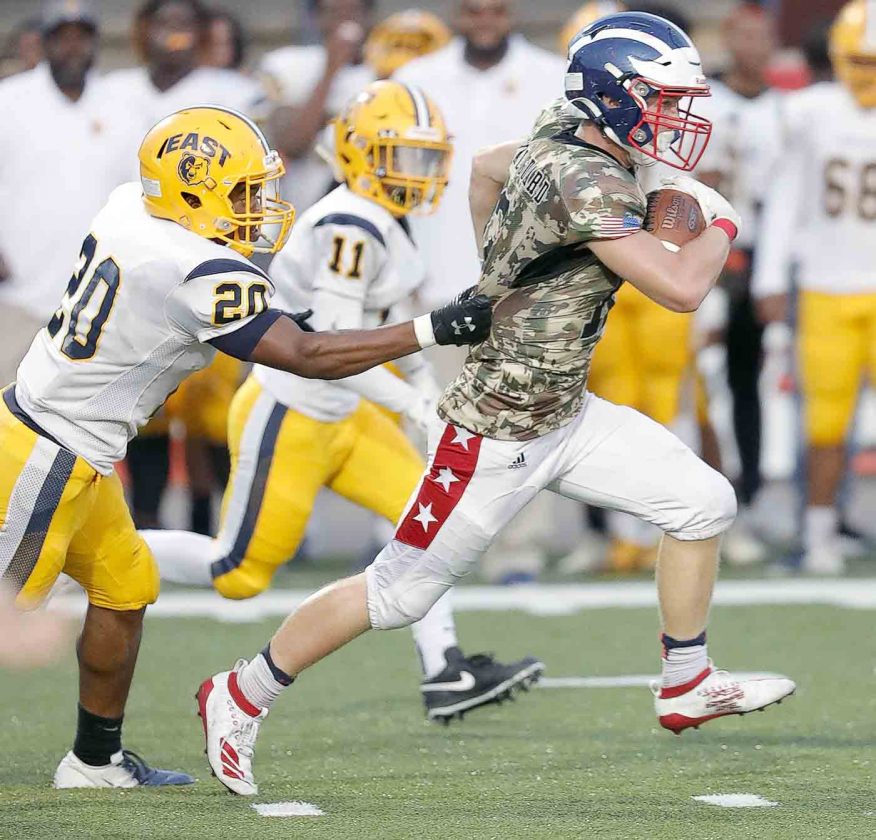 NILES — Maybe it was the fact that it was Friday the 13th.

Perhaps it was the full moon.

Whatever the case, things didn’t quite play out as many expected Friday when Youngstown East and Niles squared off at Bo Rein Stadium.

There were no weather delays. Rather, a brisk wind provided an ideal night for football.

When all was said and done, Niles found itself with a 3-0 record for the first time since 2012 thanks to a hard-fought 10-7 win over the Golden Bears.

“If you would have told me before the game that we would have scored just 10 points tonight, I would have told you that we were in deep trouble,” Niles coach Jim Parry said. “I just got done telling our team that it’s been an awful long time since there’s been a 10-7 game at this stadium.

“To win this type of game, it’s a big step for this program. Over the course of our three games this year, we’ve had to fight and we’ve had to overcome some adversity. We’ve always kept our composure, and it has paid off.”

The first possession of the game was a sign of things to come for East, which committed numerous self-inflicted mistakes throughout the night. The Golden Bears took the opening kickoff and marched down to the Niles 18 despite committing three penalties on the drive. However, on the 15th play of the series, Red Dragons defensive back Kyle Lundgrin intercepted a pass near the end zone.

East turned the ball over three times and committed 12 penalties.

Each team came up empty on its first three possessions before Niles junior Chase Sudzina booted a 42-yard field goal to give the Dragons a 3-0 lead with 3:20 left before halftime.

A botched punt attempt on East’s first possession of the second half gave Niles a short field, and the Dragons capitalized. Starting from the Golden Bears’ 18, Niles needed just five plays to go up 10-0. Romaro Baskin rushed in from 4 yards out to cap the drive.

East quarterback Isiah McBride (84 yards passing) scored from 1 yard out with 7 minutes left in the game to cut the Bears’ deficit to 10-7. However, Niles took the ensuing kickoff at its own 28 and never surrendered the ball.

East running back Maleek McIntosh led all rushers with 99 yards on 19 carries.

Niles quarterback Zack Leonard threw for 70 yards and rushed for 55 — most of which came in the game’s final possession when the Red Dragons ran out the clock. Niles running back Joey Gallo rushed for 70 yards.

“The big thing for our defense is that we didn’t allow (East) to consistently run up the middle,” Parry said. “Our secondary showed a great deal of improvement.

“Our offense was sloppy at times. We still have a long way to go. But the big thing is that after three weeks, we head into conference play with all of our goals still intact.”

Meanwhile, East coach Brian Marrow was dismayed at the number of mistakes made by his team.

“We were humbled a bit tonight, and maybe we needed it after scoring all those points the first two weeks,” Marrow said. “We made a whole lot of dumb mistakes out there tonight. We showed a lot of undisciplined behavior, and that’s on me. I need to correct those mistakes.

“Our defense played phenomenal against a really good opponent. They just got worn down at the end when they were on the field so much. We showed some positives, but overall the mistakes were just inexcusable.”

East looks to rebound at home when it hosts Ursuline. Niles tries to remain perfect when it heads to Jefferson.