Flash in the pan 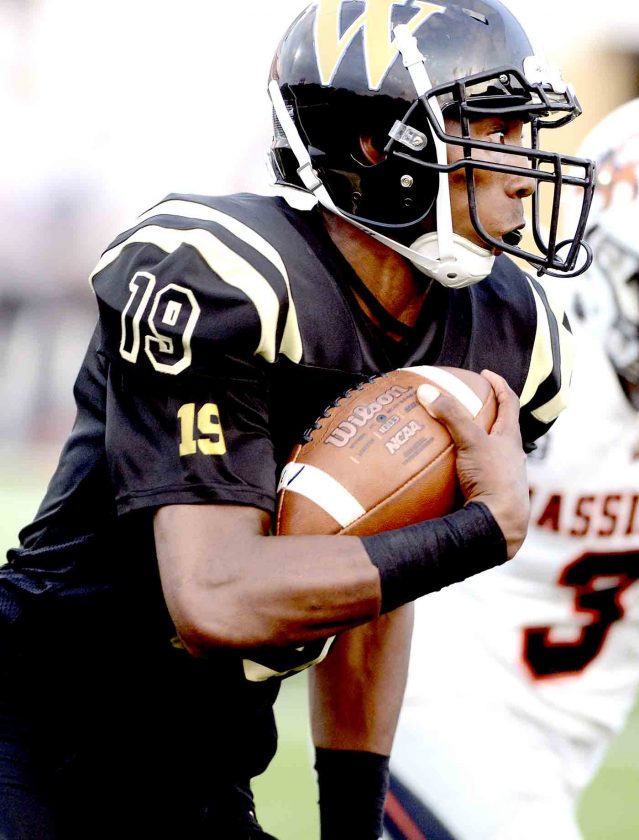 WARREN — Stands inside Mollenkopf Stadium were more than half full, the dominant black and gold of Warren G. Harding predominant on the west side. The east side was filled with a bright orange of the Massillon Tigers.

Fireworks went off in the sky above. The fervor coming from the WGH stands was felt on the sidelines.

The Raiders team embraced that passion from its fan base, so did Massillon’s proud followers.

The sulfuric smell wafting in the air remained from the aforementioned fireworks.

Hope for the underdog Raiders permeated as they faced a team they lost to by 30 points last season — a Tigers team that was the Division II state runner-up. WGH had reason for hope before Friday’s 49-7 loss to a dominant Massillon team, which seems destined to have the same success as last season. 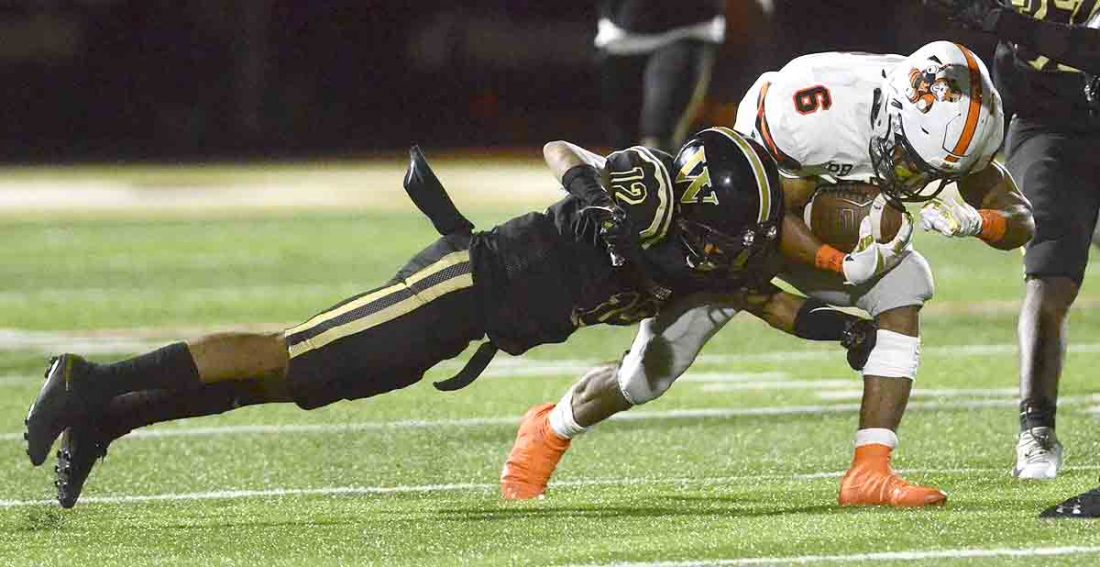 Lightning spotted by officials at 3:12 remaining called the contest.

The Tigers (3-0) held Harding to a three-and-out in the first series as Massillon’s offensive storm was delayed, just like Mother Nature.

WGH punter Cavin Stouffer boomed the first of many punts on the night into the Warren sky as Ohio State University football commit and Massillon senior Jayden Ballard called for a fair catch. Ballard’s nearby teammate got a little too close as the ball bounced off of the helmet of the other Massillon player.

Harding’s Jamel Anderson jumped on the football in front of an enthusiastic Raiders bench.

WGH coach Steve Arnold pumped his fist, pointing in the direction of the end zone. These Raiders had a reason to celebrate as Elijah Taylor, who had nearly 350 yards passing against Massillon’s rival Canton McKinley in Week 1, threw a strike to the other sideline in the awaiting arms of Ty Artis for an eventual 7-0 lead with 10:11 left in the first quarter.

Harding held Massillon to a three-and-out on the next series as the Raiders (1-2) had plenty of momentum heading into its next drive with 9:13 left in the first quarter.

Taylor’s passing and the WGH running game started to chip away, backpedaling a dormant Massillon team in this early going.

The Raiders faced a fourth-and-6 from from the Tigers’ 33 with 3:05 left in the first quarter. That pass was intercepted by Massillon, starting a wave of Tigers offense and defensive prowess Harding could not contain all night.

“We gave them a nice punch in the beginning,” Arnold said. “They responded as an excellent football team does. We just have to get better and we will.”

Harding was limited to 160 yards of total offense (66 rushing and 94 passing). Taylor was 13-of-28 for 94 yards with that aforementioned TD and interception.

Massillon, on the other hand, had 430 yards total offense as Aiden Longwell was 15-of-25 for 200 yards and two scores to Ballard, who had 94 yards.

Meanwhile, Anderson was holding his left rib area with 5:49 left in a stopped-clock situation as Massillon led 49-7. If one team is up by 30 or more points in the second half there is continuous clock, only stopping for injuries or timeouts.

Arnold said Anderson is bruised, but should be OK.

The Harding coach hopes his team can rebound like it did last season. There was an X-factor in last year’s team that has yet to be determined in 2019.

Harding hosts Austintown Fitch (3-0) as the Raiders find themselves in the same position they were last season with losses to Canton McKinley and Massillon in the first three weeks.

“The biggest difference from this year to last year is, for me as I look, senior leadership that didn’t allow us to hang our head after a loss,” Arnold said. “I don’t care if it’s a senior, junior or sophomore, we’re going to need guys to pull together and focus – make sure we’re ready for next week. They’re a good football team.”

WGH’s focus could lead to the jubilation it experienced in the early part of Friday’s game.