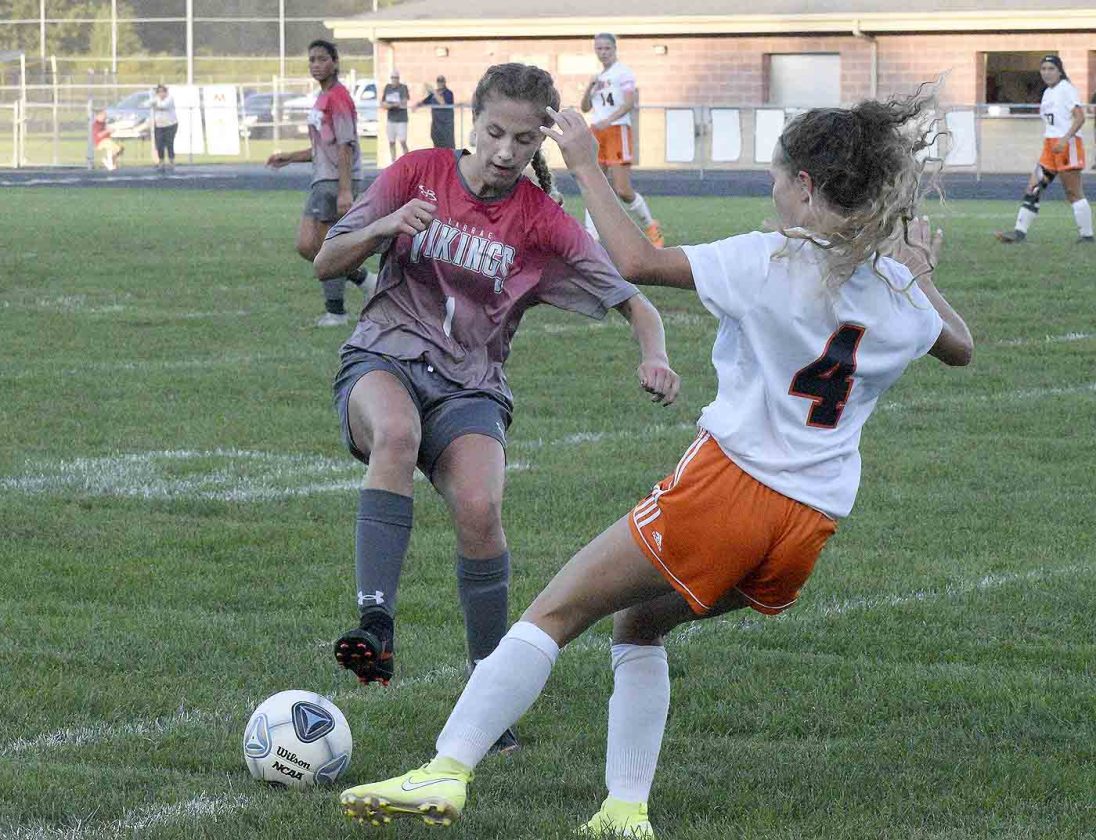 LEAVITTSBURG — The Springfield girls soccer team faced one of its toughest challenges of the year and embraced it, beating LaBrae 5-2 to remain undefeated.

Heading into the game, the Vikings had been stellar defensively, allowing only four goals all season.

“They’re one of the better teams we’ve played,” Tigers coach Justin Kosek said. “They only gave up four goals all year and we put five on them in one game.”

Springfield had a bit of a rough start, but once the Tigers got their feet wet, they were able to start putting the offense together.

“We started off struggling to connect some passes, “ Kosek said. “We struggled to get the momentum going a little bit and after halftime we got our spacing better. Then we were able to control the ball a bit more and got some more opportunities and we limited their opportunities. Front to back, I thought we played a very good game.” 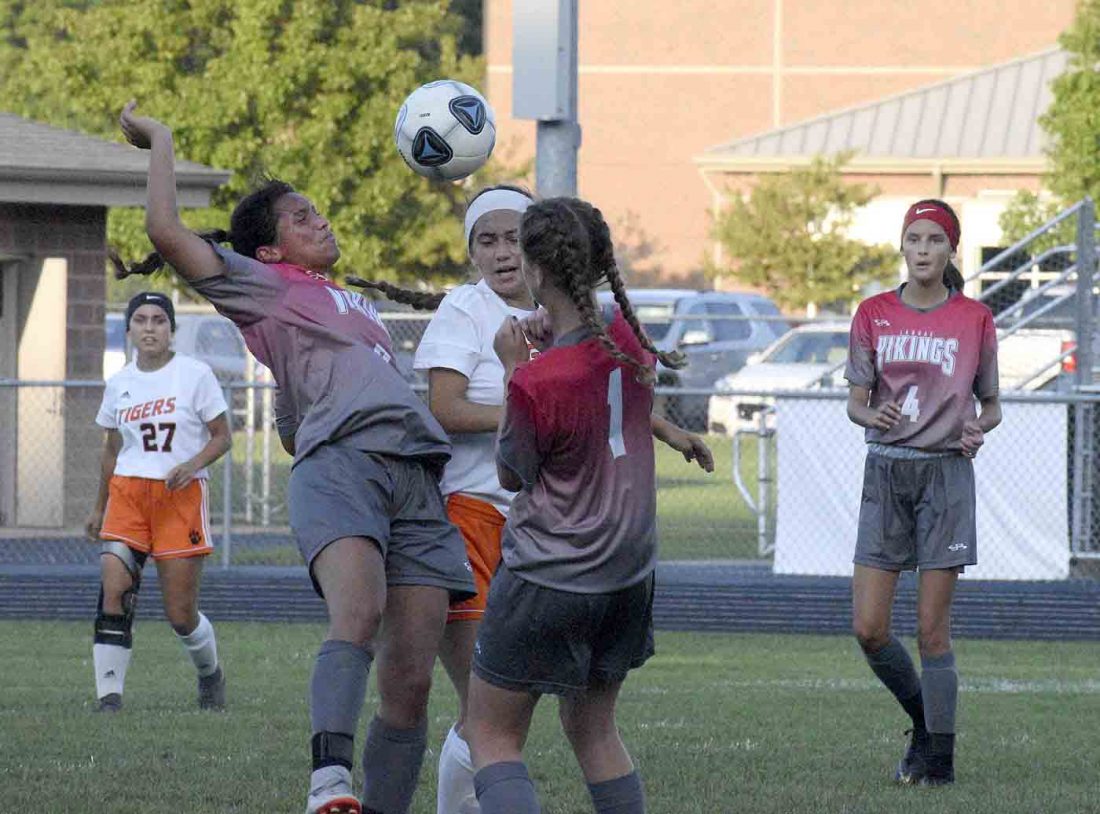 Staff photo / Brian Yauger Aryana Hartman, left, and Briley Daniels (1) of LaBrae challenge Giana Latronica of Springfield for the ball during their game Monday at LaBrae. Springfield won, 5-2, to remain undefeated at 9-0.

LaBrae coach Diane Downey isn’t sweating about the loss. Her team played down a couple of bodies and she said she is proud of the way her team performed against the talented Tigers.

“I knew coming in that my team was battling illnesses and injuries,” Downey said. “I knew that it was going to be tough for us. I thought the subs that came in for the starters did well. They played hard.

“I knew that (Springfield was) a good scoring team. … It was just how many could we stop them from scoring. A 5-2 final against them, I’ll take that right now.”

The Vikings (5-2) have a league game up next with Champion. LaBrae beat the Golden Flashes 4-0 in their previous meeting.

LaBrae got on the board first Monday with an Aryana Hartman goal nine minutes into the game. 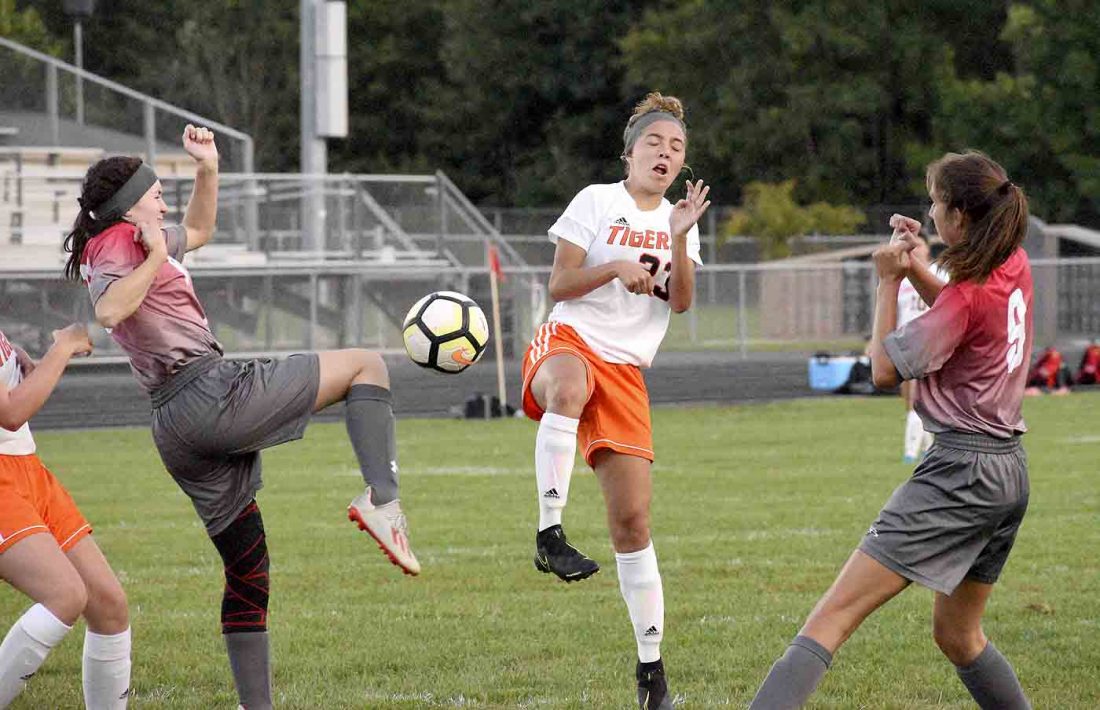 Anjelina Booksing opened and closed the second half with goals. Booksing scored her first goal 15 seconds into the half and scored later with six minutes left in the game. Gracie Venturella also added a goal for the Tigers.

This was a matchup that coach Kosek was looking forward to, telling his team to circle it on the calendar.

“Looking at the records coming in, seeing what they’ve given up and seeing what we’ve scored, I’m sure (LaBrae was) thinking the same thing,” he said. “(Vikings coach) Diane (Downey) does a great job with these girls every year. … I don’t know what they have talentwise every year, but I know they’re going to be well coached.”