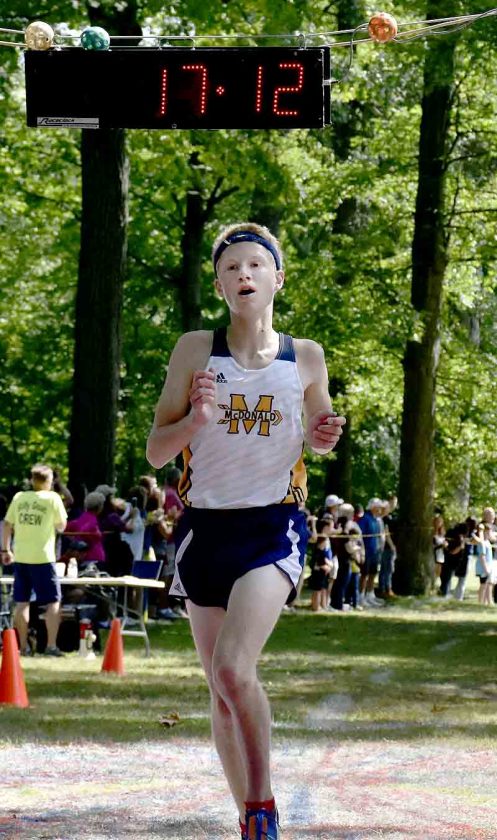 McDONALD — Anna Guerra looked over at one of her coaches and gave a thumbs-up as she was running.

The McDonald senior enjoyed every step Saturday from the start near Ohio Avenue and along the course winding through the nooks and crannies of Woodland Park.

She felt good and didn’t show any signs of exhaustion as she crossed the line in 20:02.2 as a McDonald female runner won this race for the second time in the last three years. West Virginia University runner Malina Mitchell captured the title in 2017.

Nothing surprised Guerra as she meandered around the course, leading the pack of 200-plus runners most of the way.

“I know the tactics, where there’s little potholes in the course because we’ve run it a lot before,” Guerra said. “It’s kind of like an advantage because it’s our home course.”

Meanwhile, boys in maroon jerseys passed by one after another. Was anyone else racing during Saturday’s Billy Goat Challenge Cross Country Invitational?

Woodridge. All those talented runners had those letters printed on their jerseys in block, white letters.

McDonald runners Brody Rupe and Ethan Domitrovich bided their time. They stayed back of the leaders until the 2-mile mark of the 3.1-mile race.

Domitrovich took fifth (17:22.4) as the Blue Devils came close, but the pack of Woodridge’s top three runners placing first, second and fourth was too much for McDonald to overcome.

“You get in that top group and everybody’s hammering that last mile,” Domitrovich said. “It’s lot of fun to see the lead changes and how it works out.”

No worries. This is only the first race of the season. Woodridge posted 24 points to 48 for McDonald which had Connor Symbolik, Zack Canada and Greg Dickson in the top 22.

“We did what we wanted to, so we’re happy,” Rupe said.

Ethan’s father, Lou, drove a four-wheeler to pace each race. Ethan can hear his father shouting encouraging words over the engine, cowbells and other sounds emanating from the people surrounding the course.

The feeling Ethan had running Saturday is one he hasn’t felt in some time. The McDonald senior has had his share of injuries over his career.

“It’s great to be out there with them,” Domitrovich said.

Niles closes with pair of victories