McDonald golfers bond with dads, then give back 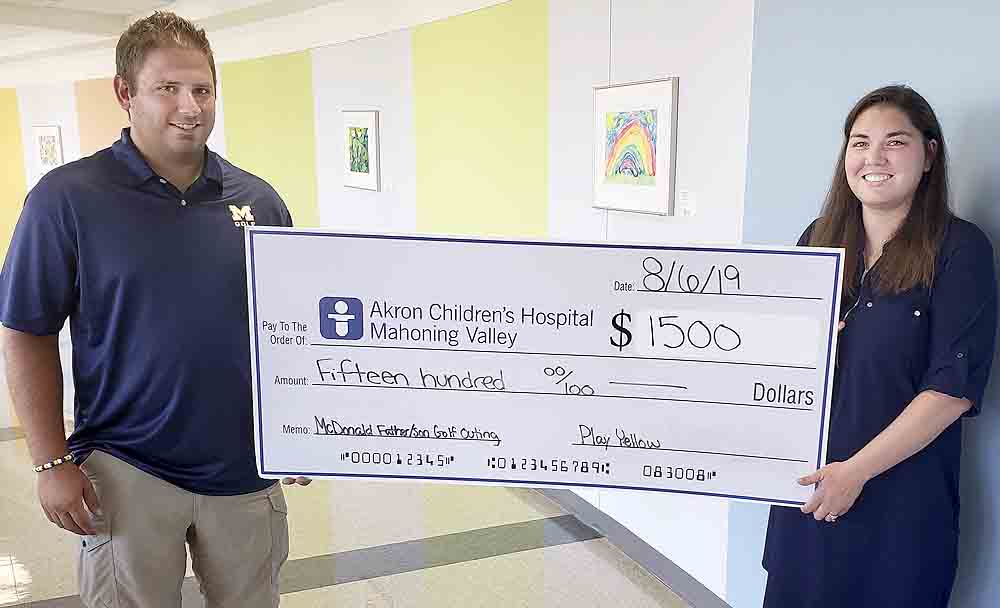 Lou Domitrovich has been playing golf with his son, Ethan, for some time now. He’s seen the improvement, along with that of his other son, Caleb, a freshman on the McDonald boys golf team.

Ethan, a senior, knows he can give his father a run on the links.

“It depends on the day,” said Ethan, who gave a very diplomatic answer.

The camaraderie, it’s something the Domitrovichs enjoy, along with other members of the McDonald community.

Lou, Caleb and Ethan were three of about 60 people to play in a father-son tournament held recently at the Blue Devils home course of Mahoning Country Club. The tournament has grown in numbers each year, a brainchild of McDonald boys golf coach Matt Vukovic.

Last season, the funds raised went to the golf team. This year, Vukovic wanted to set a precedent.

He was enamored with the Play Yellow campaign in which the PGA raised money for Children’s Miracle Network hospitals. There isn’t one near the Mahoning Valley, but there is Akron Children’s Hospital.

He donated $1,500 to ACH with half going to children undergoing cancer treatments and the other half to the sports medicine department.

“I was talking about doing something for the community,” Vukovic said. “It was a good example for them, I hope.”

His golf team has been a good example for the rest of the Mahoning Valley Athletic Conference, dominating with a 16-1 record last season. The Blue Devils lost three seniors, but have three returning letterwinners in Ethan Domitrovich, fellow senior Collin Ruane, and sophomore Michael Porter.

“Expectations are pretty close to the same,” Vukovic said.

There are plenty of inexperienced players as the McDonald coach said those competing for the number five and six spots will have to add to the team totals. The top four can hit around 80.

Ethan, a district qualifier as a junior last season, isn’t thinking that far ahead to late September or early October, the postseason. Keeping things in perspective and controlling what’s ahead are more important. Consistency in the top four is key.

“We have to keep our heads on and make sure we’re not swinging out of our shoes,” Ethan said.

He toggles his time between cross country and golf.

“It really keeps me very busy,” Ethan said. “I love doing both of them. I didn’t want to give either one of them up.”

It’s something Vukovic sees from his senior golfer.

“Anything he can be competitive in he’s going to do,” the McDonald coach said.

Playing golf with his father, it’s an activity the McDonald community enjoys as well.

Vukovic sees this father-son event growing in years to come.

“I think it’s helped some of these guys with their confidence, playing with their dads,” he said.