No rest for the weary 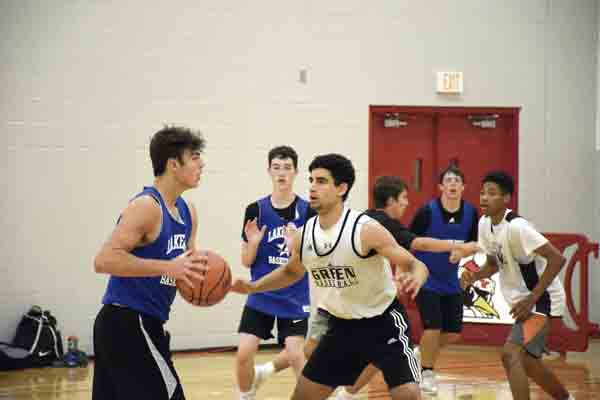 This is a Lakeview boys basketball program that was right around 20 wins each of the last two seasons, including a district championship in 2017. But Lakeview graduated six seniors, an integral part of the Bulldogs’ makeup.

It’s about getting these Bulldogs up to varsity speed.

“Playing each other in open gym, it’s not completely useless, but you’re not going to simulate what kind of pressure, speed, physicality that you’re going to get in these shootouts,” Fitch said. “This is awesome for our young kids.”

The Bulldogs also played at Mount Union University the first weekend of June, and shootouts at Perry High School and Westminster University also are a part of the team’s offseason training.

There were about 35 varsity boys basketball teams at the YSU event, with every team playing four games for less than an hour each at the Beeghly Center, Stambaugh Stadium, Andrews Student Recreation and Wellness Center and Ursuline High School — 10 courts in total.

John F. Kennedy coach Mark Komlanc said the format helps his Eagles develop chemistry. A smaller school like JFK has many multiple-sport athletes that just finished playing baseball and currently might be in football camps.

Komlanc walked around during his team’s two-hour break watching other games to see what other teams were doing.

“We’re young, so it’s great for them to see some of the older, more experienced teams and get an opportunity to see how they handle themselves in this type of setting,” Komlanc said. “It’s not meant to just come and play. That’s not the way I take it, and most coaches too. You come here to learn and grow, but you want to win at the same time.”

He saw some other local colleagues, even former Warren G. Harding coach Andy Vlajkovich, for whom Komlanc was an assistant coach for before taking the Kennedy job. Vlajkovich now coaches Canton McKinley.

“It’s good that it’s so close and everybody in the area gets an opportunity, not just the local teams, but other teams outside the area, to see how good basketball is in the state of Ohio,” Komlanc said.

Badger coach Josh Upshire, whose team made it to last year’s Division IV district final at Grand Valley, played last year’s D-IV Canton Regional finalist Springfield. Upshire said it was important for his team to see a quality team like Springfield, which returns most of its team for the 2019-20 season.

Upshire said there are plenty of good teams in the Mahoning Valley, contrary to popular belief.

“We’re underrated a little bit,” he said. “We have some talent coming up. We have some freshmen in our area I know that are going to be pretty good in a few years.

“I think we’re a hotbed of talent here in a few years.”

Ursuline coach Keith Gunther said the summer is when players improve. The Irish have a couple of freshman who are talented. The shootout format helps coaches see if younger talent can play at the varsity level.

Fitch said his team is starting to notice what needs improved by playing against better competition.

“We want to play those teams, expose what we need to work on so that it’s glaringly obvious,” he said. “Sometimes kids can’t see what it looks like. Today, with who we’re playing, they’re starting to notice and starting to talk to each other on the bench saying, ‘Oh, that’s a weakness we need to get better at. We need to contain the dribble drive, can’t get sealed on pick and rolls.’

“It’s very good for our coaching staff and our kids.”