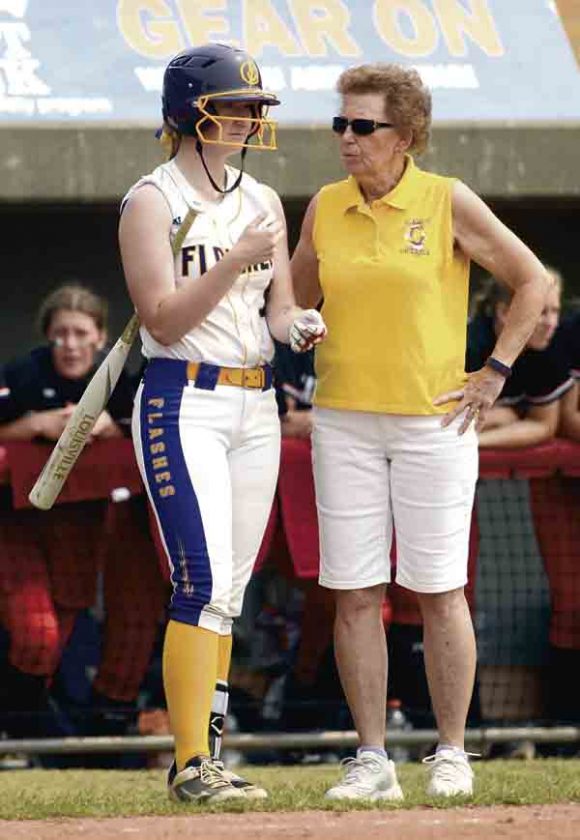 While Bristol’s staff is coaching the Trumbull County squad in this year’s Bill Sferra All-Star Softball Classic, they’ll be joined by a legend in the coaching ranks, Champion coach Cheryl Weaver.

The Bristol staff and Weaver will be coaching the group of Trumbull County All-Stars. Three of the four seniors from Champion’s roster will be joining her today for the doubleheader against Mahoning County. Abby White, Gabby Hollenbaugh and Carli Swipas will all suit up for Trumbull County in one of the two games.

Bristol coach Alisha Kugler was happy to have Weaver as part of the group.

“I have a small coaching staff, it’s just myself and Kim Swager,” Kugler said. “She offered to help us out. I think a lot of high schools have three or four coaches at their disposal, but we don’t have that up at Bristol.”

Despite all her successes as a coach over the past 19 seasons (bringing home six state titles among countless league, sectional, district and regional titles) Weaver has never been one to take credit, lofting all the praise on her girls.

“My joy is all for them,” she said after the Golden Flashes won their State semifinal matchup. “It’s all about them.”

One former player, Megan Turner, wishes Weaver would take a little credit for all she’s accomplished.

“Everyone always calls her the ‘G.O.A.T.’ or the ‘Legend of Champion’ and she’d brush it off giving credit to the girls,” Turner said. “I wish she would take credit because she’s such a great coach. She’s done so much for the Champion softball team, and the community loves coach Weaver. Everyone is a big fan and when you say her name people are like ‘Oh my God, she’s a legend.’ She should take some credit because of how awesome she is and how much time and effort she puts in, but she won’t. She never will.”

Weaver has a unique way of viewing each team.

She said each group creates its own personality and provides her with more memories.

“Every year, with new players and others graduating, each team is special in its own way,” Weaver said leading up to her team’s regional tournament run. “I have so many fond memories of each. Some had more characters with a lot of joking and teasing going on. Then there were the ones that got into decorating my lawn. Then there’s the more serious ones. To me they are all so unique.”

That dedication she has for her players has made her an easy coach to play for, Turner said.

“I think it makes you play better when you know that she’s always there for you if you needed someone to talk to,” Turner said. “I still talk to her to this day about anything. I’ll just call her up and she’ll be there to talk to me. She’s just generally a great person and that makes you play better because you’re more comfortable and you’re not worried about making a mistake or doing something wrong because she’s always going to be there.”

Keeping the players loose has always been a part of Weaver’s strategy. Before every tournament game you could hear music blasting from the dugout and see her players dancing, even in a high-stakes game like the state championship.

“I’ve learned over the years that the girls need to be relaxed as possible,” Weaver said after the win against Meadowbrook. “They love music, and each year, it seems to be a little different, but they find a way to be relaxed, and I say go for it.”

One thing about Weaver that impresses everyone is her willingness to challenge her players with a difficult schedule that would make larger programs blush.

Flashes pitcher Allison Smith mentions how much focus their schedule requires and jokes about how early they have to wake up for some games.

“Coach Weaver, if you look at our schedule, does a great job, if we’re not traveling an hour and a half to play some Division I team where we have to get up at 6 a.m., anyway,” Smith said while laughing. “We had a doubleheader with Lake and Louisville, which are two crazy teams and take a lot of focus for back-to-back games.”

“She was great,” Turner said. “I was really close with her and throughout my four years playing we got even closer. She cared about you as a person before a player and she’s always pushing you to do your best, but always have fun at the same time. I couldn’t have asked for a better high school coach.”

The “Legend of Champion” enters her 20th season with the program next year.