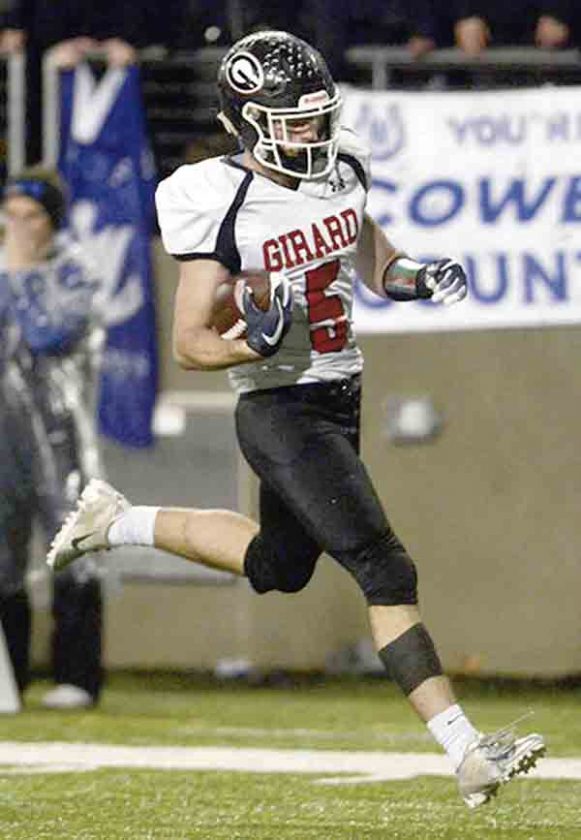 “He does everything right in the classroom and on the field,” Pearson said. “He definitely leads by example and is positive. He is great with teaching our youth, and he makes everyone around him better.”

Malito is one of the many reasons the 2018 Girard Indians made it Tom Benson Hall of Fame stadium for the Division IV State Championship game. After amassing more than 1,000 yards receiving and catching 15 touchdowns, Malito recently joined the trend many of his teammates have been on in committing to a major Division I college program. Malito knew Toledo and coach Jason Candle were the right decisions because he felt the culture of the program resembled Girard’s in many ways.

“In December I met safeties coach Ross Watson, and last Wednesday visted him and coach Candle at Toledo,” he said. “I called them the next day to make my commitment.”

A college prospect can go through a lot in terms of making his or hers decision on where to play at the next level. For Malito, with offers from schools that have been very friendly to Girard’s program like Harvard and hometown Youngstown State, Toledo felt like home to Malito.

He felt they run their program very similar to Girard.

Malito hopes to accomplish more than just on-field success at the University of Toledo.

“I’m hoping to major in business management and minor in sports management,” he said.

Malito wants to be involved in coaching at some point as well to impact young people.

The overwhelming decision of where to spend the next four years of one’s life can be tough, especially for a student-athlete. And now that Malito is committed coming into this next season, he’s focused 100 percent on the 2019 season.

“Now that I’m committed, my straight focus is Girard football,” he said. “My focus now is getting us where we need to be.”

Coming off a state-title game run and a 1,000-yard season, Malito knows his senior year will be closely watched, and like he alluded to earlier, he is locked in.

“Last year we had an awesome season, and people are counting us out with loss of seniors,” Malito said. “Terrance Davis and Mark Waid took me in and gave me the guidance I need, and now that I’m a senior, I’m trying to follow in their footsteps.”

Davis and another former teammate, Marco Donatelli, will both be playing in Malito’s future conference, the Mid-American Conference. And when asked how he felt about possibly playing them in the future, he expressed excitement.

“I couldn’t be more excited,” he said. “Knowing I could play against them and match up at receiver and corner with Terrance is really exciting.”