Thomson steals the spotlight in Hubbard

And he hasn’t stopped.

Thomson is a four-year starter in center field, and he has become a master of thievery during those four years. The senior shattered the school record for stolen bases in a career with 102 (the previous mark was 65), and this year he broke his own single-season record for steals with 35 … and counting. Maybe even more impressive is he has only been caught once out of 36 attempts this year, and Schiraldi and Thomson said it came on a rather questionable call.

So just how fast is Thomson? Well, no one really knows because he doesn’t run track and has never been timed in the 40-yard dash.

“To be honest, no,” responded Schiraldi when asked if he ever timed Thomson running from first to third or home to first base. “I know that sounds funny. I just never bothered because all I knew is that he was fast. I didn’t need to know an exact time. How fast? Fast enough, I can tell you that.”

Thomson has gotten faster — and smarter — over the years.

He stole 20 bases both his freshman and sophomore years, and then swiped a school-record 27 as a junior. He has 35 in just 27 games this season, and an increase in speed isn’t the only reason why.

As he gains experience, he’s learning more about when to go and how to read pitchers.

“It’s always interesting trying to figure out what a guy’s move is,” Thomson said. “If he’s going to have a slide step, or if he brings (his leg) up. If he bring it way up right away, I’m gonna take off. It doesn’t matter who it is because I know if he’s bringing his leg all the way up, I’ve got a great chance to get (a steal). …

“I’d definitely say I’m better now (at reading pitchers),” he added. “You go from little league when you’re 12 and never seeing a pick-off move to being 13, and they start doing pick-offs and taking lead-offs. As the years have gone by, I’ve started to really learn to look through the back foot to the front one. As soon as he picks up that front foot, I’m gone. If I see the back foot, I’m just going to dive back to the bag.”

Smarts and speed are a deadly combination, and it helps to have one the best hitters in the Mahoning Valley behind you as well.

Lukas Mosora, also an all-state linebacker for the Eagles, leads Hubbard with a .513 average. Twenty of the senior’s 41 hits have went for extra bases (11 doubles, 7 triples, 2 home runs). Mosora, the No. 2 hitter, is a lefty as well, which means catchers can’t see the fleet-footed Thomson as he takes his lead.

Pitchers can see him, but the speedy leadoff hitter’s ability to go from standing still to running full speed in a short amount of time makes him hard to pick-off.

“The biggest difference this year to when he was younger is the leadoffs,” Schiraldi said of Thomson, who’s hitting .367. “He will get some monster leads, to where I’m like, ‘Oh, man.’ Teams will just keep throwing over, and it doesn’t matter. That’s where the quickness really comes in. When you’re at a dead stop, can read (a pitcher’s move) and can go either direction … that’s got to put some kind of pressure on the other team.”

His brains and quicks aren’t just beneficial on the basepaths.

Thomson has won the team’s “defensive player of the year” award twice in the past three seasons. He can cover a large portion of the outfield from center field and has ran down countless would-be base hits, Schiraldi said.

Schiraldi, a 1999 Hubbard graduate, said he’s the best center fielder he has come across in his time at the school.

“I’ve been at Hubbard 18 years (as a coach),” Schiraldi said, “and there’s no one better. There may have been one or two guys who were in the neighborhood, but nobody better. And nobody stole as many bases. He’s far and away the best I’ve seen at doing that. He’s almost instant offense.”

Thomson also owns a 3.78 GPA and intends to major in engineering while seeking a minor in sports broadcasting at Youngstown State University. He will attempt to join the baseball team as a walk-on.

Until then, Schiraldi and the Eagles are going to enjoy watching him terrorize teams at the plate and on the bases. A kid who has started nearly every game since his freshman year (he sat the first five innings of the season opener as a freshman before taking over for good) has left a lasting impression on his coach.

“He’ll hit a routine ground ball to the shortstop and beat it out,” Schiraldi said. “Then, one pitch later he steals second, the next pitch he steals third, and (the pitcher) is like, ‘I just got this kid to ground out,’ and two pitches later it’s a triple. It really is amazing to watch sometimes.”

The seventh-seeded Eagles open the Division II sectional at 5 p.m. today in Hubbard against No. 10 Girard. 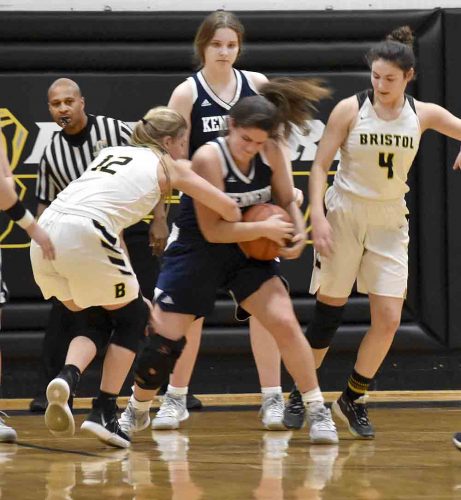