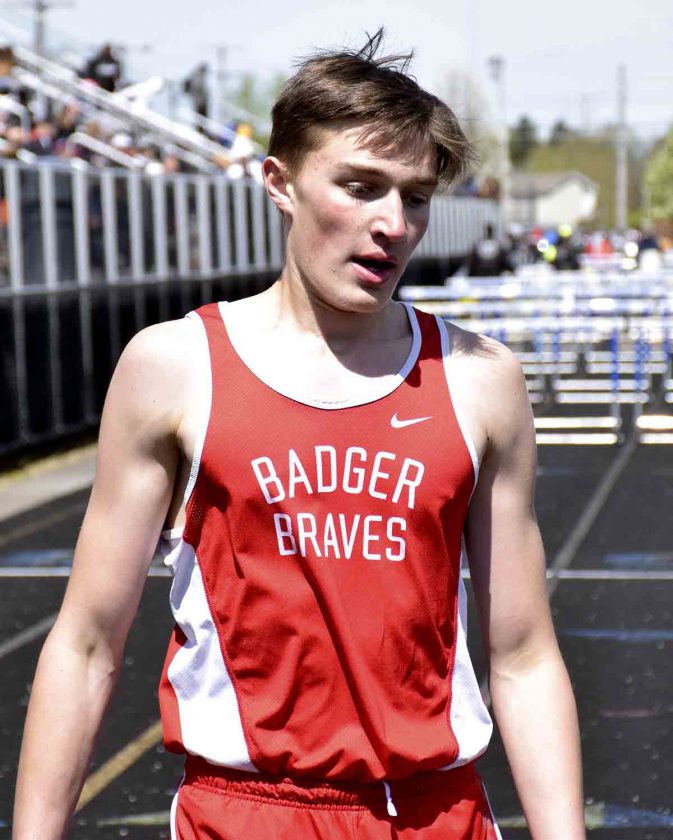 POLAND — How tall is Brandon Greathouse? The Badger High School senior isn’t shy about telling you.

Things didn’t measure up after seeing Greathouse running the first leg of a 4×800-meter relay. For those who don’t know, that’s running two laps around a track, a half mile.

He, along with some other competitors, were sitting on the field turf of Dave Pavlansky Stadium. An official quickly tried to get them up, so they’d be gone before the second leg of competitors finished. Greathouse didn’t want to follow the others leaving the infield and on the other side of the all-weather surface. He needed to go up the Poland football field and toward the start of the 110 hurdles.

What? That isn’t right. Is it? It’s not a double you normally see, if ever.

He won the 110 hurdles at Saturday’s Poland Invitational. Greathouse is ranked second in the Division III Massillon Perry Regional heading into today’s finals of the Trumbull County Meet — running a preliminary best 15.49 on Tuesday.

Greathouse ran 41.69 in Tuesday’s Trumbull County preliminaries of the 300 hurdles, ranking him second in the D-III Massillon Perry Regional. The top four in each regional final advance to the state meet, along with the next two fastest competitors from all four regions as at-large bids.

The Braves need to cut about 20 to 30 seconds off their 4×800 relay time to make it out to state, but the 4×400 relay, which made it last season and finished 16th in Columbus, looks like it’s going for a second straight trip to our state’s capitol.

The Braves are second in the region, but 7 seconds behind East Canton, a dominant small school looking for its second-straight Division III boys state track and field team championship.

“I went to state last year for the 4×400 and that was a blast,” Greathouse said. “It will always be more fun to go with a team.”

The X-factors for Badger are seniors Greathouse and Scotlund Shaffer, both on last year’s 4×400 team, run in each relay. Senior Jimmy Plunkett and sophomore Tanner Houser are on the 4×400, while sophomores Lincon Hopkins and Jacob Zahoransky are on the 4×800.

The tandem of Greathouse and Shaffer are the trendsetters in their practice habits.

Greathouse was the team’s leading hurdler two seasons ago before Devin Moore moved to Badger from Austintown Fitch for his senior season.

Moore brought a wealth of knowledge Greathouse is using this year in his hurdles. Moore placed seventh in the state in the D-III 300 hurdles.

“He taught me the importance of doing drills,” Greathouse said. “I used to think those were not important, how to start properly. That’s still the worst part of my race. It’s pretty terrible compared to other people.

There’s the 110 and 300 hurdles, two events Greathouse seems destined to go to state in this season. The 4×400 relay, it’s likely the Braves are making a repeat appearance.

Now, the 4×800 needs to cut time for Badger to make it there as well. Six athletes at state. Now, that’s a party in Columbus.

So what’s Greathouse’s plan heading into districts in mid May?

“I don’t want to divulge all the plans,” he said. “I don’t think anybody cares.”

The 4×800 is before the preliminaries of the 100 girls and 110 boys hurdles at districts, regionals and state.

“We’ll see how long that will last,” Greathouse said.

Whatever happens, you can bet it’ll be fun. It always is with this Badger senior.