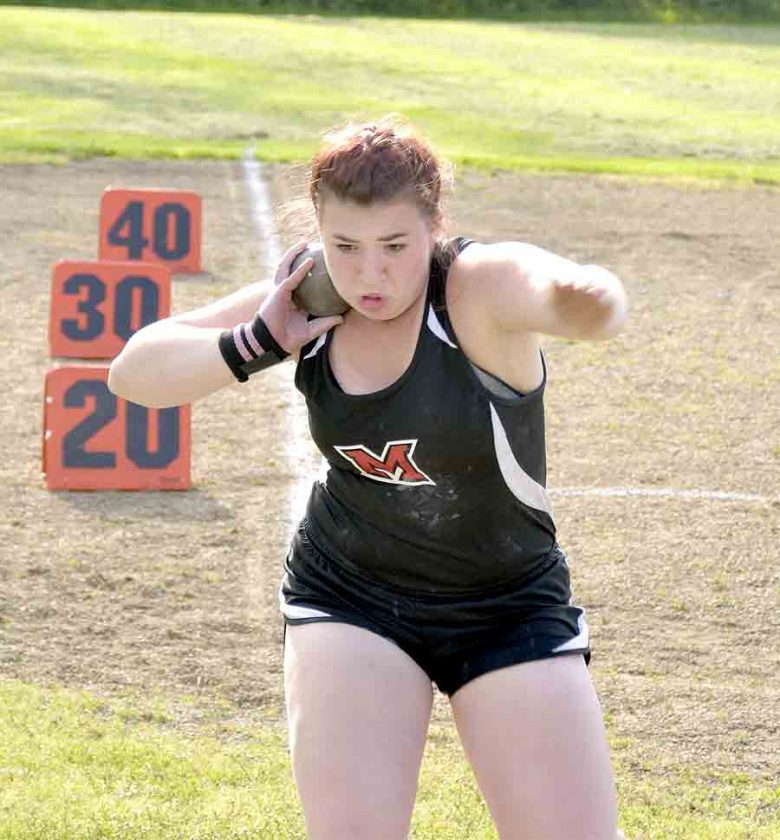 CUYAHOGA HEIGHTS — Claire Miller stood in the throwers circle and slapped one leg, then the other. The Mathews High School sophomore took the shot put in her right hand.

A quick turn toward the crowd lined up along the 4-foot high chain link fence showed her intensity.

Miller was in second place before this sixth and final throw, the third of the finals Wednesday at the Division III district track & field meet at Cuyahoga Heights.

She turned back toward sandy pit in front of her. The shot was thrust off her hand and landed as the farthest throw of the competition, 37 feet, 2.25 inches, as she captured her second straight district title in the girls shot put.

Miller was followed by Bristol’s Sydney Fenstermaker (36-10.75) and Grand Valley’s Madison Roskos (34-8.75), who finished in the next two spots.

Miller celebrated with her throwing coach Logan Culp and Maplewood throwomg coach Christen Clemson, a two-time state champion for the Rockets in the early 2000s and a standout at Penn State University. Clemson coaches not only Maplewood throwers, but other throwers around Trumbull County. She was Miller’s throwing coach last season. She and Culp combine efforts to instruct Miller.

Miller’s father, Ed, came over to give her a big hug following the throw, along with plenty of congratulations from Culp, Clemson and plenty of Claire’s supporters nearby.

There was only one word to capture Clarie’s moment.

Miller, who made the state meet last year in the event, is ranked in the top 15 in the state in Division III. She’s looking to get a personal record next week at the Massillon Perry Regional. The top four in each district final advance to the regional.

She wants to advance her progress with sound form and good techniques. There’s not problem when Culp and Clemson are coaching her.

“She just soaks up all the knowledge we give to her,” Culp said. “She takes off full stride every single time. She picks up what we tell her so easy.”

Her best throw is 37-11.25 at this year’s Trumbull County Meet. The top three D-III throwers in the state have surpassed 40 feet. Miller thinks she can make that group a quartet.

“I’ve come up with it a couple of times in practice and warm-ups,” Miller said.

Clarie is well aware when that winning throw is within her grasp.

“I know when I let out a big grunt,” she said. “That’s my biggest thing, whenever I pull my head away and feel it explode off my hand.”