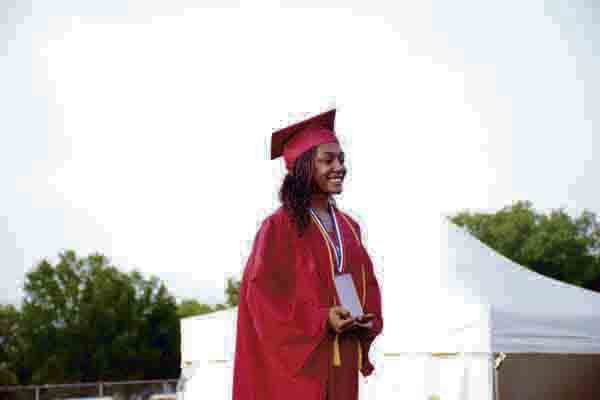 Tribune Chronicle / John Vargo LaBrae’s Dynesty Ervin stands on top of the podium to accept her diploma Friday. Ervin had to choose between running in the Division III Massillon Regional for a chance at state or to go to the Vikings commencement.

Tribune Chronicle / John Vargo LaBrae’s Dynesty Ervin stands on top of the podium to accept her diploma Friday. Ervin had to choose between running in the Division III Massillon Regional for a chance at state or to go to the Vikings commencement.

MASSILLON — Dynesty Ervin had a choice to make. Stay in Leavittsburg and graduate or run for a chance to state.

The LaBrae senior chose the latter and proudly stood alone on the podium in the front of the Massillon Perry High School track, facing the crowd at hand.

Her red robe draped over her uniform as she was presented her diploma. Only Ervin’s track spikes were in full view.

“I think it was better than graduation,” Ervin said. “I was definitely iffy if I wanted to miss graduation or get my second chance at going to state. I definitely took the state route.”

Yes, she’s going to state in Division III girls 100- and 200-meter runs — two second-place finishes. The top four in each event heads to the state meet in Columbus next weekend. There are at-large bids, two from each regional final. Those are the two best in the cumulative four regions in each division out of the fifth- and sixth-place finishers in each event. 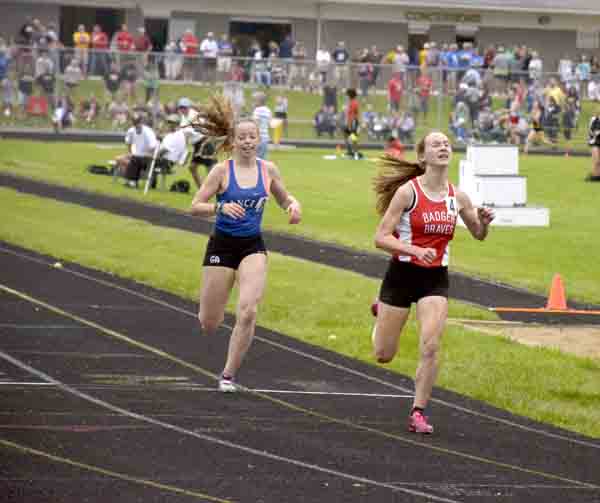 As darkness fell upon the skies in western Stark County and this year’s regional ended, Ervin and her family in attendance didn’t want the party to stop at the meet.

“I think we’re going to dinner and celebrate,” Ervin said.

That wasn’t the only reason to party for area athletes.

“You know she made 10 today,” Miller said in passing.

That’s bottle flips, a half-full water jug with a handle attached. Barreca had three flips after taking second in the shot put on Wednesday. If you didn’t know, she’s a self-proclaimed professional bottle flipper.

By the way, she also took first in the Division III Massillon Perry girls discus with 124 feet, 11 inches. If you haven’t figured out by now, Barreca is about having fun when she competes.

“If you’re not having fun, what are you doing?” Barreca said. “I say that all the time. I see people stressing, mess up their throw.

It works for her.

Liberty’s boys 4×100-meter came into Friday’s regional finals thinking that the Crestview team was fast. Hey, they won last week’s Springfield District. The Leopards took second. Things wouldn’t repeat themselves on Friday as Liberty’s team of Braylen Stredrick, Migel Burgess, Justin Cizmar and Zion Matlock ran ahead of the pack and beat out Crestview for the regional title in 43.53 seconds. Crestview clocked 43.61 to take second.

“We came here and decided we wanted to be the regional champs,” Cizmar said. “That’s what we did.”

Miranda Stanhope came into this year’s regional as the defending champion in the girls 1,600. Mission accomplished. She edged out Gilmour Academy’s Katie Engle with a time of 5:11.67 to 5:12.14.

Stanhope, a junior, started out fast with the group and maintained her position in the second and third lap. The push came in the final go round the track.

“That was a pretty solid race for me,” she said.

She and McDonald junior Anna Guerra led the pack in the 3200 later in the meet. Guerra was first, while Stanhope took second.

“I finally had some good competition with Miranda,” Guerra said. “She had a great mile before this. She could’ve been a little tired and I didn’t do the mile. We pushed ourselves really well.

“She’s a really sweet girl. I’m really proud of her. I had a great time today. I think it went well.”

Guerra won in a time of 10:58.43, breaking her regional record from two years ago. Last year, the McDonald junior had some hiccups in her performances. This year, any bugs were worked out and she emerged as one of the dominant Division III distance runners in the state.

“That’s such a great feeling,” said Guerra of getting below 11 minutes. “That’s been my goal since the beginning of the season. I knew I was in good shape.”

It’s been a great year so far for Trumbull County athletes as the track and field season moves to state, especially in Division II.

“We’re all seeing the results of the hard work put in earlier in the season,” Stanhope said. “As we taper, our times are dropping. We have a very strong county right now. It’s going really well for everyone.”