District play at the plate

Late-charging Niles could not overcome Poland in semifinal 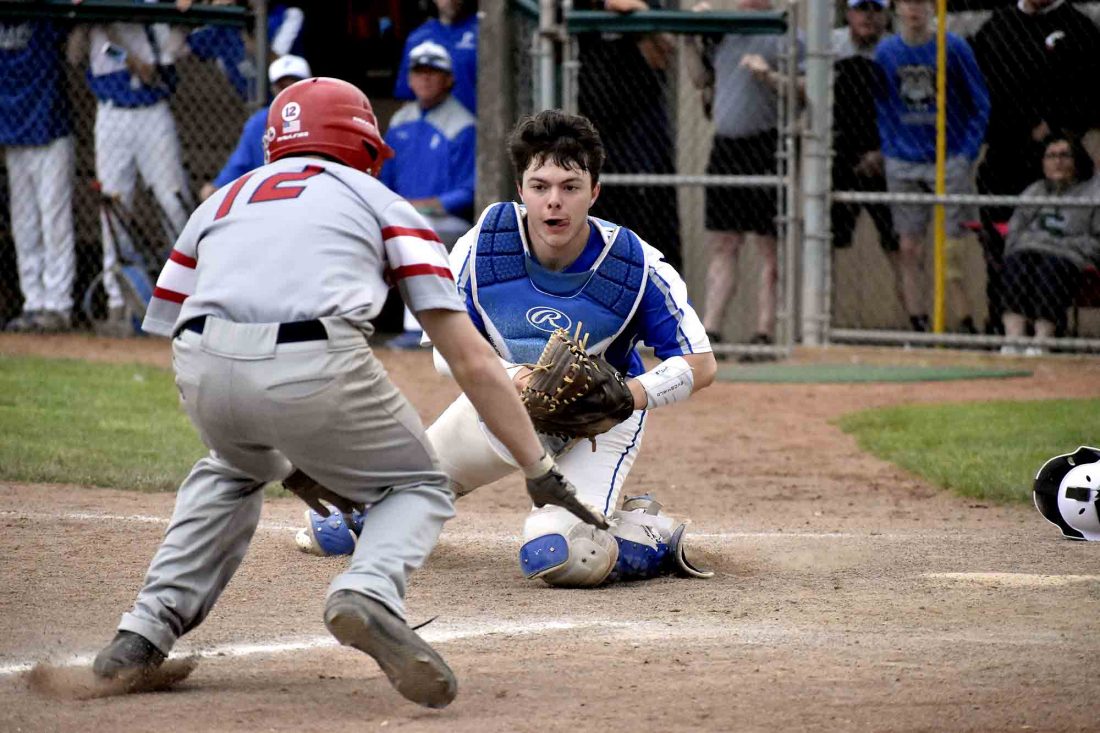 Tribune Chronicle / Robert Hayes Andrew Russell of Champion delivers a pitch against LaBrae. He had seven strikeouts in the Golden Flashes 6-4 victory.

Tribune Chronicle / Robert Hayes Dane Spague knocks a base hit for the Vikings.

Tribune Chronicle / Robert Hayes Champion’s Abe Bayus successfully steals third against LaBrae while Lucas Lancaster holds down third base. The ball popped out of Lancaster’s glove, which is why Bayus was called safe.

Tribune Chronicle / Robert Hayes Gordon Seger of Grand Valley is prepared to take a cut at the plate in the top of the first inning.

Tribune Chronicle / Robert Hayes Nick Reichelk takes a secondary lead off of first base in the top of the first inning.

STRUTHERS — Niles coach Mike Guarnieri said the Red Dragons and Poland were as evenly matched as any two teams could be prior to their Division II Struthers District semifinal Monday.

They proved to be just that in an incredible game at Cene Park.

Niles rallied from a six-run deficit to tie the game in the sixth inning, but a home run by the Bulldogs’ Zachary Yaskulka untied it, and a close play at the plate ended the game, allowing Poland to pull out an 8-7 victory. The Bulldogs play Canfield in the district final at 7 p.m. Wednesday at Cene Park.

“We have a motto, TTLO — to the last out — and it’s on the walls of our building,” Guarnieri said. “And it’s not just something to put up on a wall, it’s something these kids live their lives by. They’re gonna fight, and they’re never going to give up until they tell them it’s over.” 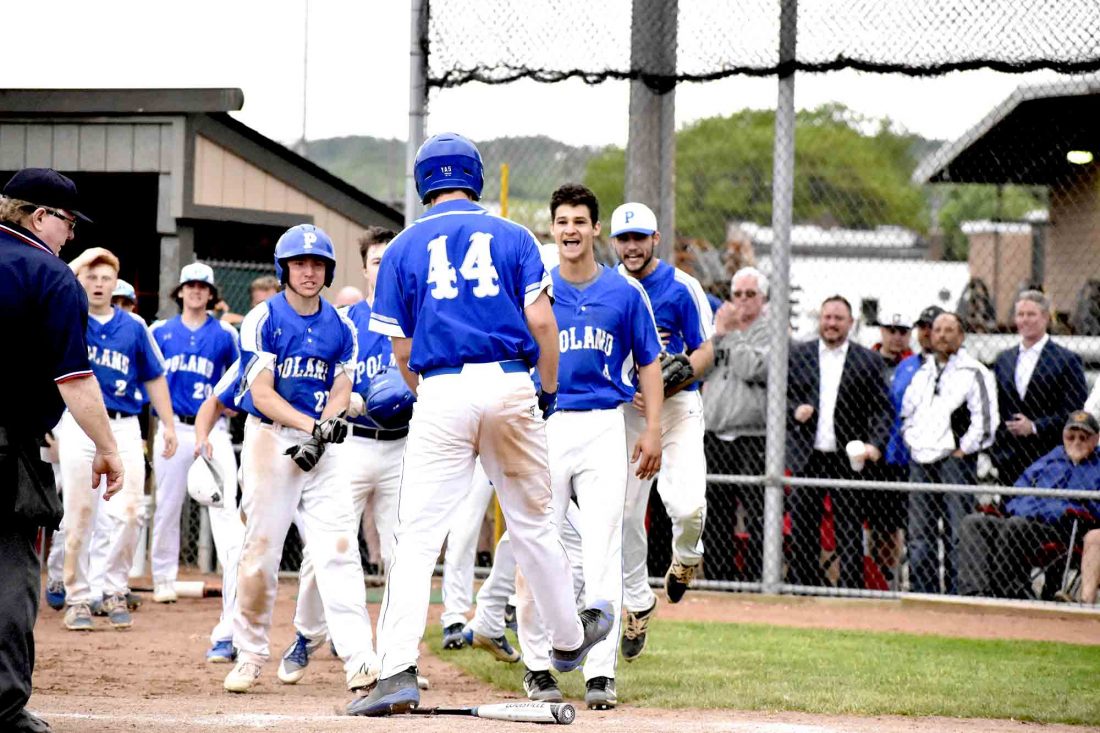 The Bulldogs led, 7-1, after scoring four runs on five hits in the first inning, and they added three runs in the second inning to chase Niles starter Dylan Weida. The Red Dragons (19-10) slowly chipped away, scoring one run in the first, third and fourth innings before tying the game at 7 with a four-run sixth. Niles took advantage of two Bulldog errors in the inning.

“We kind of chunked the game,” Guarnieri said of the comeback. “We talked in the dugout about, ‘They won the first third (of the game). We were gonna win the middle third and then fight it out in the last three.’ They responded and did a hell of a job doing it.”

It wasn’t tied for long.

The left-handed hitting Yaskulka, Poland’s cleanup hitter who led off the bottom of the sixth, blasted a home run that soared well beyond the right-field fence and onto another field to make it 8-7. It was the first run relief pitcher Brandon Hayes gave up since the second inning, when he entered the game. 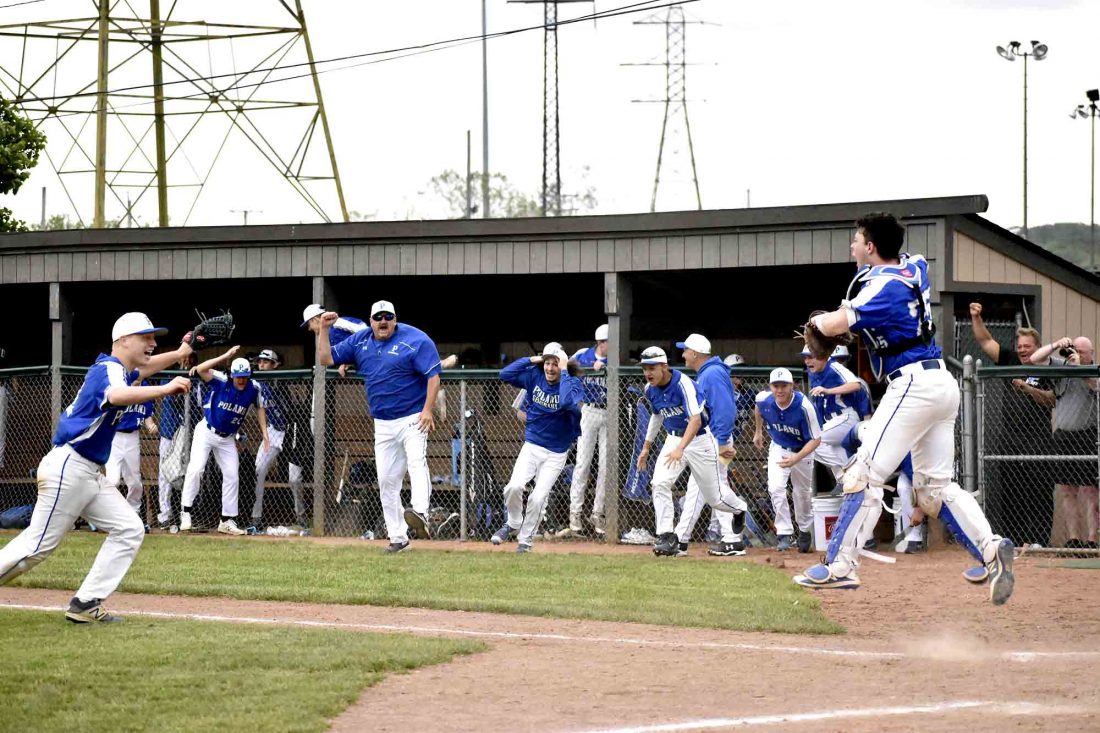 “It was unbelievable,” he added. “I was running the bases, and I came in the dugout, everyone was jumping on me. Honest to god, I thought I was going to throw up. That’s how it felt. It was so unreal.”

The sick feeling returned in the top of the seventh inning but for a different reason.

Down to their final out, Hayes singled to center field to put the tying run on. The next batter, Joe Corson, laid a perfect bunt down the third-base line, and Poland relief pitcher Alex Barth tried to make a wild throw to first as he was falling backward. The ball sailed high over the first baseman’s head, and Hayes rounded third as right fielder Jeremy Castro gathered the errant throw and fired a one-hopper right on line to home.

The catcher caught the ball and tagged Hayes out as he tried a twisting slide to avoid the tag, ending the game and setting off a raucous celebration.

“Castro had a hell of a game,” said Poland coach Rich Murray of the senior right fielder, who had four hits (three doubles) and a three RBIs. “I don’t know how many hits he had, three or four, and then to throw that kid out at the end, that’s big.”

It was an interesting five days for the Bulldogs, who actually lost to Hubbard in the sectional round but were reinstated into the tournament when the Eagles were disqualified for playing an out-of-state game during school hours.

Murray said he and his players cried in the dugout, and he had already held some end-of-the season meetings with his coaching staff before he found out they were back in the tournament.

“I didn’t know how to take it,” Murray said. “I didn’t know how they were going to come out and play. I talked to (Hubbard) coach (John) Schiraldi yesterday. We had the all-league voting. I told him if it was up to me, they beat us fair and square, I’d rather they were playing, but we had to go play.

“So I didn’t know how my kids were going to take it. We came out fired up, and thankfully we got the W. … It was a weird situation after you say bye to the kids, and then they have to come back. It was weird, but we responded.” 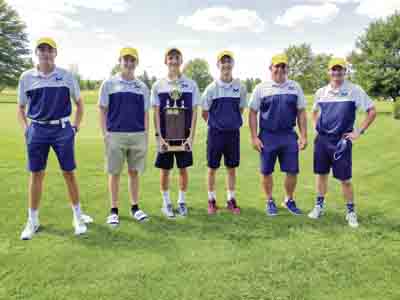