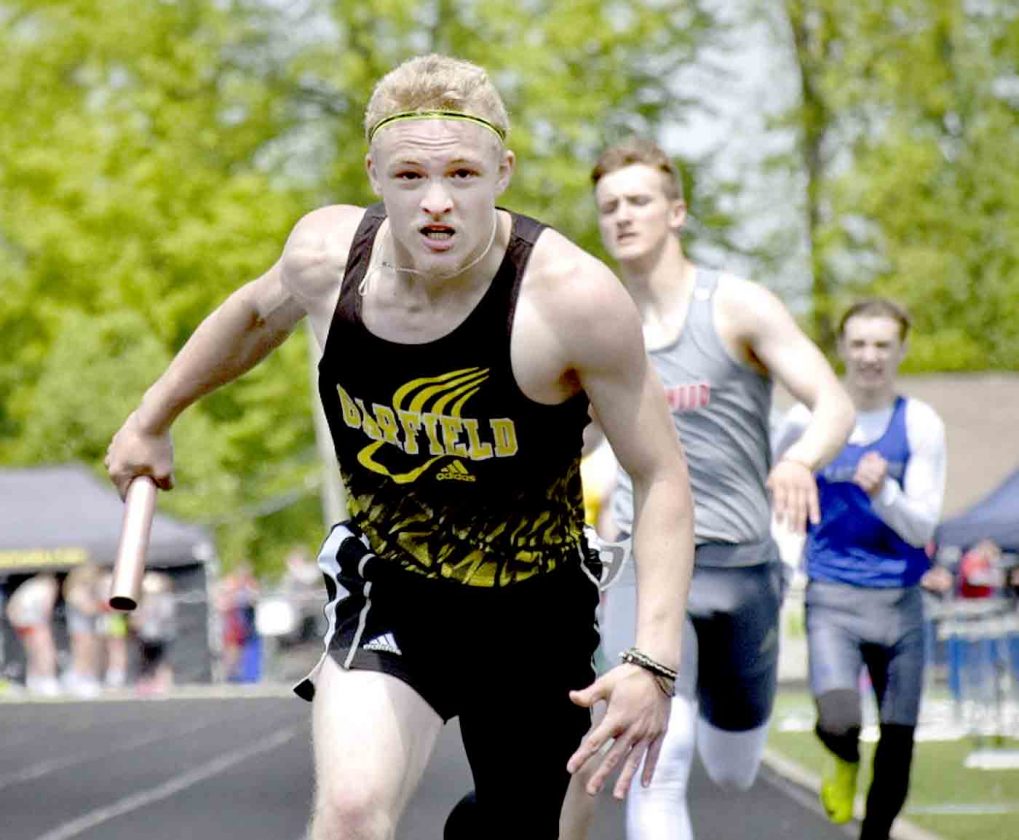 Garfield’s Tyler Klouda claimed yet another win for the G-Men boys track and field team, winning the 1600 race earlier in the day. That victory threw Saturday’s Division II Lakeview District meet into a free-for-all among four teams.

Girard and Garfield were tied with 79 points, while Lakeview and Streetsboro each had 74.

The 4×400-meter relay stood between one team hoisting a team trophy and the others jockeying for second place.

Garfield’s Travis Synnestvedt, Alex Bell and Ralph Grandizino all held close to the leaders, but it seemed if it would be a two-team race between Ursuline and Streetsboro. 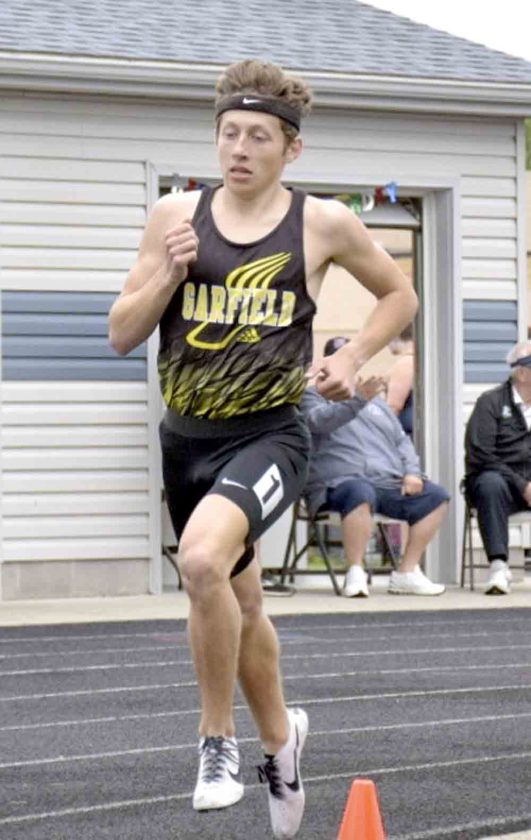 Freshman Ryan Stoller had other plans. He was well aware of his team’s standing and knew getting past Streetsboro was imperative, as well as Girard and Lakeview as he took the baton for one time around the Lakeview High School all-weather track.

The Streetsboro runner started pulling away by the 200 (meter) mark, while the Ursuline runner began to slow.

“I hear my coach screaming, ‘Kick it’ at the 150 mark,” Stoller said. “I kicked it in, past the Ursuline kid. I don’t like losing, so I had to get that Streetsboro kid.”

The two made the mad dash down the straightway as if they were in the open 100 race, not holding a cylindrical implement and finishing up a full lap around the track.

Stoller leaned first and got over the finish line in 3:31.09, just ahead of Streetsboro’s 3:31.20. Lakeview took fourth, while Girard was eighth.

While Stoller talked to the media, public address announcer Diane Neighbarger announced the G-Men had won this year’s boys district title with 89 points. A loud cheer emanated from the gathering of Garfield athletes just outside the track and shot put area. Streetsboro’s second-place finish in the 4×400 left them second with 82 points, while Girard finished with 80 and Lakeview had 79.

Stoller is a pitcher for the G-Men baseball team, so Garfield coach John Bennett had to get permission from baseball coach Mike Peas to let Stoller run on his off days. The Garfield freshman had his best stuff going on the track Saturday as he qualified for next week’s Austintown Regional. The top four in each final advance. Stoller is going in the 110 and 300 hurdles, and the 4×100 and 4×400 relays.

Stoller was ailing after the 300 hurdles, so his status was questionable, but some pressure on a leg along with some ointment got him back into shape. The freshman was ready for his moment after Synnestvedt, Bell and Grandizio put him in position.

“That was as exciting as it comes,” Bennett said. “That’s my favorite race because of that. Freshman aren’t supposed to do what Ryan Stoller did today, to be in the mix like that.”

It seemed as if it would be Girard’s meet, especially since junior Nick Malito paced the Indians as he won the 100 and long jump, and anchored the winning 4×100 relay.

Klouda’s two wins helped the G-Men win their first district title since both the boys and girls won in 2016.

He said he’s happy with both runs, but the concentration in both events is what fueled him Saturday.

“I take this meet to push myself mentally,” Klouda said. “In the (1600), I knew I had a goal to break my district record. That’s what I was going to set my mind to. Just have to put your head down and chase it. If you’re able to do things like that alone, your game is going to hit the next level and you have competition.

“This week is a great week to test myself. Next week, I’ll have a lot of competition at regionals.”

Garfield’s boys are competing in nine different regional events with two competitors in the 3200.

This G-Men team is not just resting on the legs of Klouda, who has led Garfield in many meets over the last couple of years.

“It’s a good problem to have,” Bennett said. “He’s the heart and soul of this team, but we have other guys that are very capable of stepping up to the challenge.”

Saturday, Stoller and the G-Men 4×400 relay were the ones who brought the district title home with the quickest four laps around Lakeview’s track.

“It felt good to come past that line, crowd cheering,” Stoller said. “Get your adrenaline pumping once you cross that. It feels amazing.”