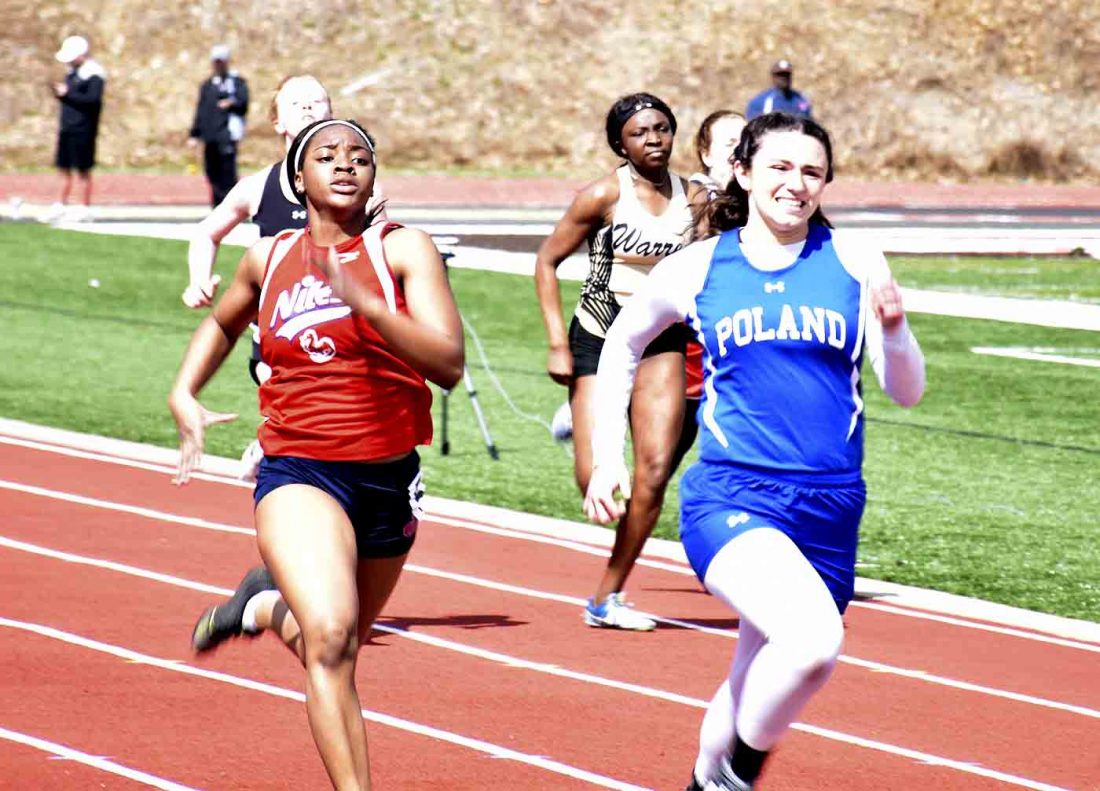 EAST PALESTINE — Chante Clinkscale sees Alan Caldwell and Mark Greene on the other side of the fence.

The Niles McKinley High School sophomore sprinter knew all that stood between her and her competitors was … her.

Things have changed with her start. The blocks are different for one.

Caldwell, the Red Dragons girls coach, and Green, Niles’ assistant coach, have been instrumental in Clinkscale’s progress, making her one of the best sprinters in the area.

They have pushed her to be better than she could imagine. To be a better sprinter, the start has to be timely.

“Whoever’s hand is off the ground first is winning,” she said. “I just keep thinking that, be confident and you’ll get a good outcome.”

Clinkscale won the 100-meter dash Saturday at the Ward/EP Girls Invitational at East Palestine High School in a time of 12.48 seconds, edging out Poland’s Mia Musolino (12.91). Musolino turned the tables in the 200 as she beat Clinkscale in 26.95 to 27.22.

Quickness helps coming out of the blocks.

“We work on switching how she was coming off the block,” Caldwell said.

Clinkscale knows she has to attack the curve heading into the final 100 of the 200. Her focus is unwavering.

“Keep going after it in practice with the boys,” she said. “Come out stronger. I have to finish stronger in the 200. That’s my goal right now.”

Clinkscale keeps healthy before races. Like most high-school athletes, she has a pre-game or pre-race routine. Hers is a banana, granola bar and some sips of water.

“Usually bigger meal after the meet to fill my body back up,” she said.

She’s been lifting after basketball on Tuesdays and Thursdays. At practices, she never held anything back.

Clinkscale finished 13th in the 100 last year as a freshman in the Division I Austintown Regional meet, seen by track followers as the little state meet.

Her focus changes this season.

“I learned don’t be nervous,” she said. “Let that all go out the window and go after it.

“This year, of course, I have a pusher. I see myself in state and placing.”

Clinkscale is going to the GlenOak Second Sole Eagle Elite next weekend and the Poland Invitational and Optimist Invitational later this season.

She’ll have Caldwell and Greene motivating her every step of the way this season.

“They really push me,” Clinkscale said. “Without a pusher, it’s nothing. It keeps me to be confident, don’t worry about anyone else in your lanes or your heat. Just go after it.”

So far, that’s what the Niles sophomore is doing.