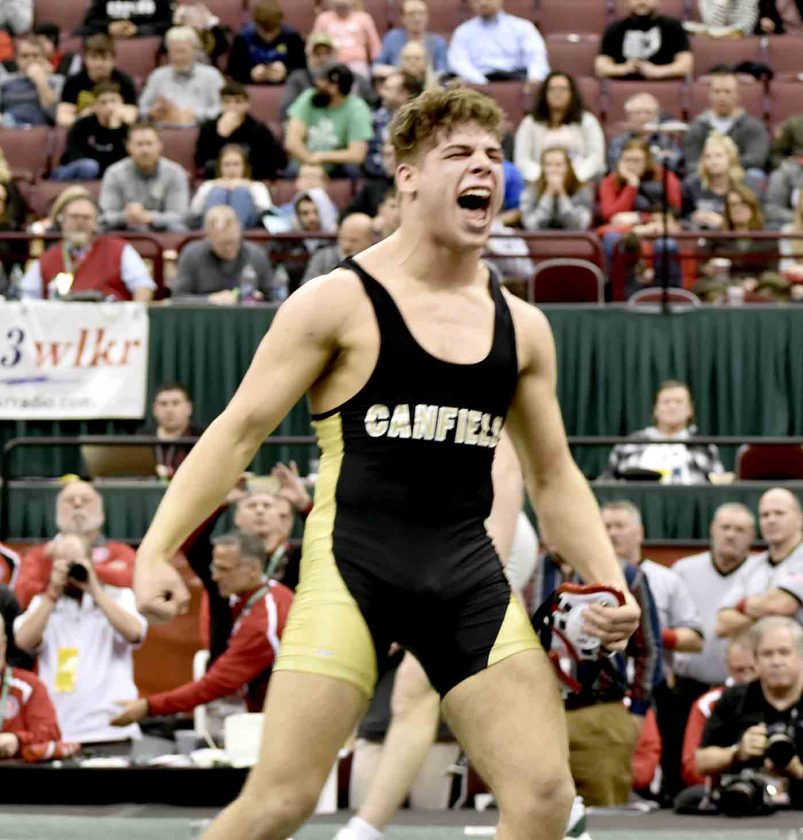 COLUMBUS — Things went as well as expected for the Canfield wrestling trio at the OHSAA wrestling state championships. Not so much for Girard’s Jack DelGarbino.

The hardest part for the Cardinals may have been when Anthony D’Alesio struggled to take off his warm-up. He didn’t unzip his hooded sweatshirt far enough, and it got caught on his head seconds before his match started. Canfield coach Steve Pitts had to help him pull it off the rest of the way.

Everything else went smoothly from there.

D’Alesio, Nick Crawford and Tyler Stein thoroughly dominated the competition, in succession, with each winning handily. The three-headed attack set a school record with their three state titles at 182, 195 and 220 pounds.

“They made it easy on me,” Pitts said. “After the first one, my nerves calmed down, so that was good. Tremendous effort by those guys. Unbelievable. Who would’ve thought a closed-enrollment public school from Youngstown was going to have three state wrestling champs? Credit to our kids for all their efforts.” 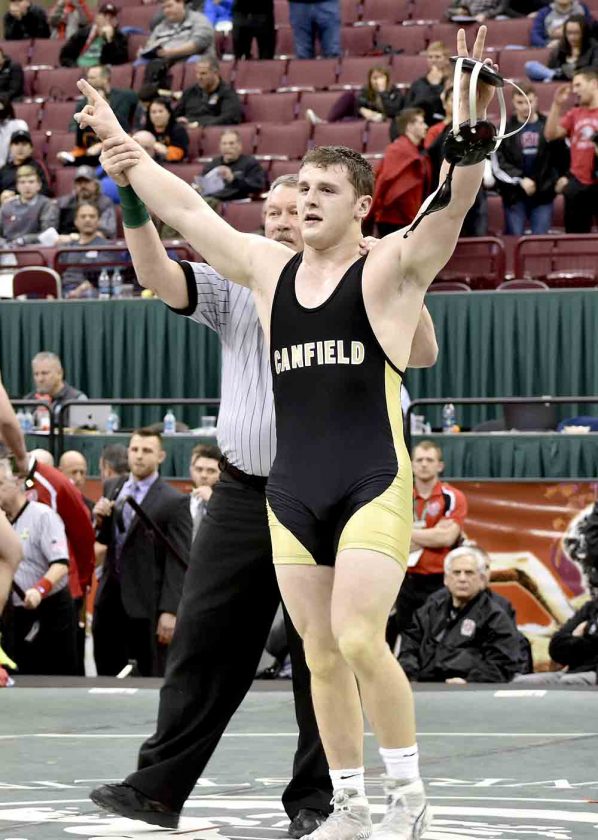 The night started with D’Alesio, a junior and already a three-time state placer, wrestling Austin Hinzman of Coventry, who he pinned last week in the district championship. D’Alesio rolled his ankle celebrating a win by Crawford on Friday, but it didn’t faze him. He was in control from the start, securing a first-period takedown that set the tone for the match.

He aggressively pushed Hinzman around the mat for the next three periods but didn’t take any major risks, winning 4-3.

“I knew he was going to run away because he knows I can throw him,” said D’Alesio, who used an upper-body throw to pin Hinzman last week. “That’s where the stall points I got. Coach said to push him, so I kept pushing him to get those points. I knew his game plan — everyone knew his game plan — to take it to overtime.”

It never got close to that.

A late penalty point for an illegal hold led to the final score. The only other points Hinzman scored were on escapes when D’Alesio let him up. 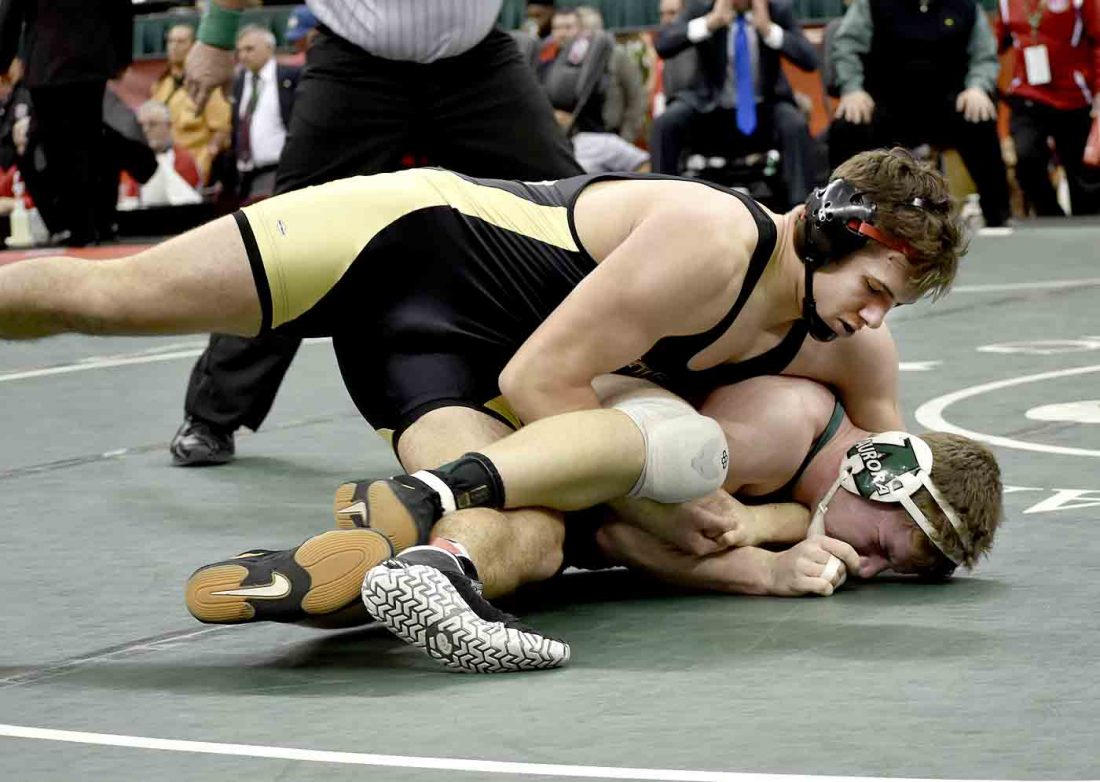 Tribune Chronicle / Joe Simon Canfield’s Nick Crawford locks up a cradle against Colin McNamara of Aurora in the Division II 195-pound state final on Saturday at the Schottenstein Center in Columbus.

Crawford’s 8-3 victory over Colin McNamara of Aurora was even more dominating. He scored a takedown in the first 25 seconds, let McNamara up and then took him down again. This time, Crawford locked up a cradle, giving him a 7-1 lead after one period.

He cruised through the rest of the match and added a third state title to the Crawford household (his brother, David, won back-to-back titles in 2017 and 2018.

“No, not at all,” said Crawford of whether he thought he would dominate McNamara, who he beat, 3-2, in last weekend’s district final. “I was just so nervous, I cut it loose and just went out there, and that’s what happened.”

The returning state champion and Ohio State commit quickly secured a first-period takedown, just like his teammates, and that was a sign of things to come. He took down Max Fausnaugh of Bowling Green High School three different times and also earned a reversal during his 8-3 victory. 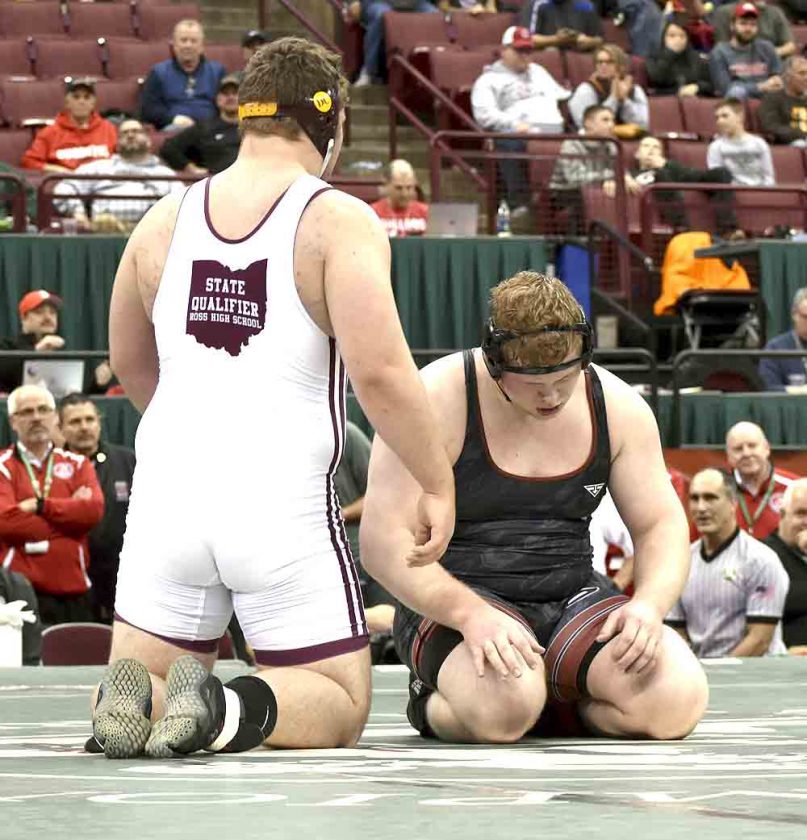 He is the second Canfield wrestler to win consecutive state titles, matching David Crawford’s feat. He said having drill partners like D’Alesio and Nick Crawford to push him to the limit in practice helped him stay sharp after last year’s title.

“I can’t even explain it,” he said of what their practices are like. “Everybody just beats the crap out of everybody, and we’re all buddies after. Ever since last March, we were like, ‘All right, back-to-back-to-back, three straight champs.’ That was the goal, no matter what. We got in the room, and we just worked our butts off, day in and day out, weekends, and it paid off.”

The night didn’t end the way most expected.

DelGarbino came into his Division II 285-pound state final match with 77 straight wins. He was the defending state champion, ranked No. 1 in the state and ninth nationally, but Alex Coleman of Hamilton Ross High School matched the size, strength and speed of DelGarbino.

The two had a wild, high-scoring first period in which Coleman reversed DelGarbino after a quick takedown. DelGarbino escaped for a 3-2 lead. He then took Coleman down again and briefly put Coleman to his back, but the athletic big man again rolled DelGarbino through and put him to his back — the first time that’s happened to the previously undefeated DelGarbino all year.

The first period ended in a 7-6 lead for DelGarbino — and with both wrestlers exhausted. The size of Coleman seemed to wear on DelGarbino, who gave up another roll, and two-point reversal, as Coleman took an 8-7 lead.

DelGarbino chose neutral to start the third period and nearly scored a takedown as the two went out of bounds. He then attempted a single-leg takedown, but Coleman was ready for it, spinning behind for a 10-7 lead. DelGarbino couldn’t finish a reversal attempt in the final minute, losing 10-7.

“I just didn’t come ready to wrestle, I didn’t prepare right,” he said. “I just wasn’t ready for the match. … I wasn’t myself out there. I didn’t do the things I normally do, and I just didn’t go out there to win.”

The Girard senior became the first Indians wrestler to win a state title last year. The Princeton recruit leaves the program as the most decorated wrestler in school history, finishing fourth in the state as a sophomore, first as a junior and runner-up as a senior.

Neither is Canfield’s incredible run.

The Cardinals finished with 79.5 points, placing fifth overall in the team standings. They were state runners-up three years running, the best stretch in the history of the Eastern Ohio Wrestling League.